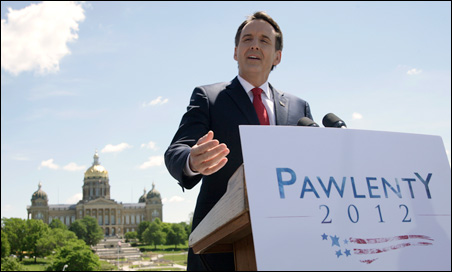 REUTERS/John Gress
Pawlenty launching his campaign for president in Des Moines on Monday.

DES MOINES — It was a soundstage with what appeared to be a castle rising into a clear blue sky as the distant backdrop.

This stage was on the third-floor rooftop of the Iowa Historical Building, home to the Historical Society and its current exhibit on the Iowa caucuses.

The sun beat down, and as that “castle” came into focus a few football fields away, it was, in fact, Iowa’s State Capitol, a lovely golden-domed building.

The man in the middle of the photogenic scene stood behind a microphone, the Capitol to his back. In front of him, about 150 supporters sat attentively in folding chairs.

The temperature pushed toward 80 summer-like degrees, and the speaker in the dark suit and red tie declared: “I’m Tim Pawlenty, and I’m running for President of the United States.”

The crowd of boosters rose in unison, applauding from the rooftop for the first Minnesotan to declare his run for the presidency since Walter Mondale in 1984.

A 24-hour rollout
This Pawlenty announcement certainly came as no surprise, but it was the most genuine chapter of the 24-hour-long choreographed rollout of the former governor’s official national blastoff, here in the state where a victory next February is considered a must for such an unknown.

This portion of his I’m-running-palooza came in person with a live audience.

Sunday night he released a video on his website and at YouTube confirming what Minnesotans have known for nearly two years now.

Monday morning, his handlers deftly had an Op-Ed piece placed in USA Today and that link was widely distributed via email.

As the sun rose on the East Coast, in time for TV news shows, his campaign emailed excerpts of his forthcoming speech in Des Moines.

Then, finally, his wife, Mary, in a brilliant red dress, introduced him, praising him as being from a family that is “the salt of the earth” and mentioning all their global travels including “a country that is particularly dear to our heart, Israel.” 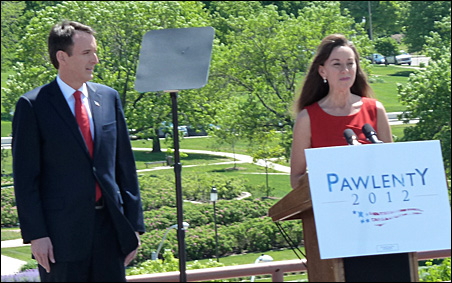 MinnPost photo by Jay Weiner
Tim Pawlenty looking on as wife Mary introduces him to the Des Moines crowd.

And the key political points and images just kept on coming.

The spouses of 23 years embraced, and a minute later, at 11:39 a.m., Iowa Caucus time, Pawlenty was formally in the race. His 17-minute speech contained more than 2,300 words, but “truth” was uttered 16 times, the most of any single messaging word.

Indeed, his speech, which included cuts-and-pastes from many of his earlier pre-announcement talks and videos, was titled, “A Time for Truth.”

You can read the whole thing here.

But you’ll learn that Pawlenty is claiming his campaign will tell “the truth” about the financial crisis the country is in, about how seniors’ entitlements need to be reduced and how — and here was his zinger that received very lukewarm applause under the midday sun — how subsidies to farmers for ethanol production must go.

“We need to phase out subsidies across all sources of energy and all industries, including ethanol,” Pawlenty said. “We simply can’t afford them anymore.”

On judges and his Minnesota record: “I appointed new conservative justices to the state Supreme Court. They understand that judges are supposed to rule according to the language of the law, not the preferences of their party. You know something about that here in Iowa.”

That latter line was a reference to three Iowa state judges who upheld a law that allowed gay marriage. Recalls last year unseated all three.

On unions: “This week, I’ll also be in Washington, D.C., to remind the federal bureaucracy that government exists to serve its citizens, not its employees. The truth is, people getting paid by the taxpayers shouldn’t get a better deal than the taxpayers themselves … And in the private sector … it especially means the National Labor Relations Board will never again tell an American company where it can and can’t do business.”

That final comment was a reference to an NLRB decision in another hot primary state, South Carolina, barring Boeing from opening a non-union plant.

And, then, of course, there was a series of rat-a-tat-tats on President Barack Obama, with his conclusion: “In 2008, Barack Obama told us he would change America … and he has. In 2012, we will change America again … and this time, it will be for the better.”

What followed was a “town hall,” in which a half-dozen audience members asked questions from what kind of judges he would appoint to the U.S. Supreme Court to Israel to the deficit to health care to education. 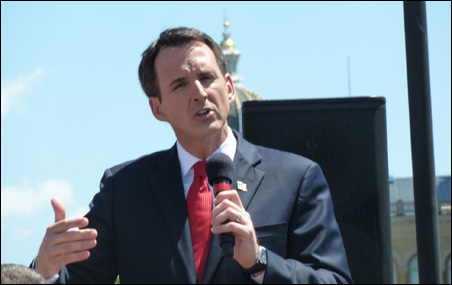 On the deficit: “Barack Obama won’t tackle it. He doesn’t have the courage to do it.”

As for the Supreme Court, a man asked if Pawlenty would appoint someone like Justice Antonin Scalia. Pawlenty quickly replied, “Yes.”

On Israel, in referring to Obama’s recent falling out with Israeli Prime Minister Benjamin Netanyahu, Pawlenty said there should be “no daylight” between the two nations.

On education, he went after teachers’ unions: “We need to break open the monopoly that is our country’s education system … Our own government’s mindless, ridiculous monopoly system. [Applause.] I’m for school choice in all forms.”

Reaction, of course, is positive at event
Reaction, of course, was positive. The throng on the folding chairs was extremely friendly. Alice Cronin, 59, of West Des Moines, said she liked what she heard but was still wavering between Pawlenty, Herman Cain and Minnesota’s other candidate, Rep. Michele Bachmann. 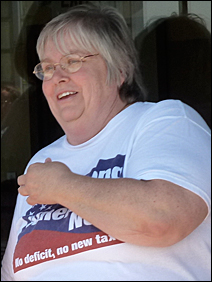 Jerry Hickok, 74, with red suspenders and a straw fedora, said he liked what he heard Pawlenty say. Bachmann is slated to be in Iowa Thursday amid rumors she might officially declare her candidacy, too.

But Hickok, of Urbandale, Iowa, a retired mortgage broker, said he thinks Pawlenty has a better chance of winning the Iowa caucuses and Republican nomination than Bachmann.

“I think he will win,” said Hickok, 73. “We don’t want the Romney health care,” he said of former Massachusetts governor Mitt Romney’s state health plan. “In the end, I don’t think Iowa will go for him.”

Of Bachmann, Hickok repeated what others said, “I like her, but in my heart I know she can’t win. It’s not the best conservative in the race — it’s the best candidate who can win.” 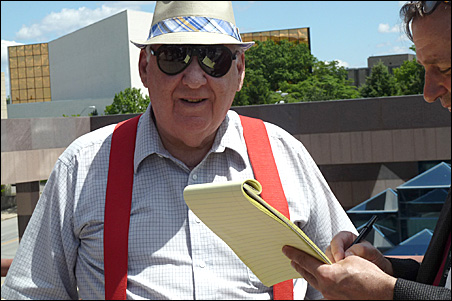 MinnPost photo by Jay Weiner
Jerry Hickok on MItt Romney: “In the end, I don’t think Iowa will go for him.”

Four blocks away from the tightly produced Pawlenty show, in the crowded conference room of a Democratic consulting firm, leaders of the Iowa Democratic Party and the Minnesota DFL had their say, too.

It was as rapid a response as a short walk from the Capitol to the office building allowed. Words were not minced.

Iowa Democratic Party Vice Chairman Mike Kiernan pointed out what he labeled as Pawlenty’s record of flip-flopping, particularly as it applied to ethanol subsidies. Pawlenty was once for them as governor of Minnesota.

DFL Chairman Ken Martin gladly took the 250-mile ride to Des Moines to blast Pawlenty, who announced his candidacy even as the Minnesota Legislature was deadlocked over a budget that Democrats and others blame on Pawlenty himself.

As for Pawlenty’s commitment to telling the truth, Martin said, “Telling the truth would be very different for Tim Pawlenty because he’s been lying about his record in Minnesota at every one of his campaign stops over the past several months.” 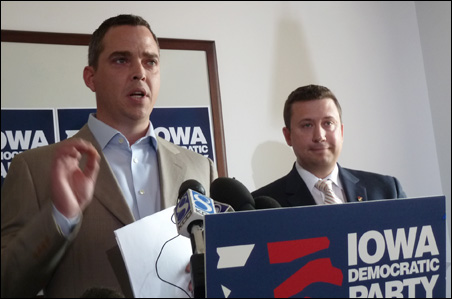 And Martin opined that Pawlenty announced his candidacy in Iowa instead of his home state, “so he can avoid his miserable record back home … There is nothing in Governor Pawlenty’s record that would warrant a promotion.”

He mentioned the state deficit, the rise in property taxes, the number of people who have been taken off of health care rolls …

Of course, as someone pointed out, while former Vice President Mondale announced his candidacy in Minnesota, he wound up winning only one state in ’84 against incumbent Ronald Reagan.

Perhaps, Pawlenty, while playing to Iowa’s most conservative instincts, learned from the great Democrat. Better to declare his candidacy beyond Minnesota’s borders, where the sun shines, his record is less known, the crowds are friendly and the images are presidential.

For encores, Tuesday it’s Florida and Wednesday, Washington, D.C. His name is Pawlenty, and he’s running at full speed.