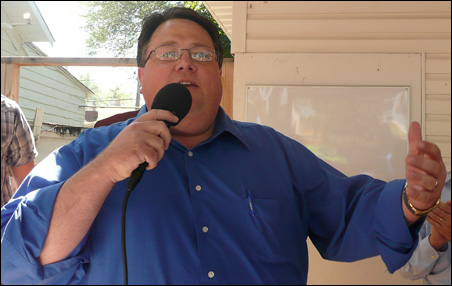 MinnPost photo by Jay Weiner
In an interview Sunday, Tony Sutton said that the CAGE issue and his public affairs firm had become a distraction.

Minnesota GOP Chair Tony Sutton has decided to resign from the board of an anti-gambling group that is supported by the Minnesota Indian Gaming Association and close his consulting business, a move that may deflect questions about whether he exploited his party position to promote Indian gaming interests.

The decision, though, raises a broader question about how unpaid, highly influential political figures can earn a living without wading into the murk of conflict of interest.

Questions about Sutton were raised after activists on a carefully guarded email list, limited to party use, began receiving emails from Citizens Against Gambling Expansion (CAGE), an advocacy group that opposes expanding gambling in Minnesota beyond trbial-own casinos and is  headed by former national Republican committeeman Jack Meeks.

The emails arrived as many Republican legislators are considering expanding gambling beyond the Indian-run casinos to deal with the state’s budget gap. As a longstanding CAGE board member, Sutton was asked by a member of the party’s executive committee whether he had provided the list, which he vehemently denied.

In an interview Sunday, Sutton said that the CAGE issue and his public affairs firm had become a distraction, but maintained there was no conflict of interest with his work as GOP party chair.

“I have been completely consistent with the platform” he said, referring to a provision in the state GOP platform that opposes the expansion of gambling in Minnesota. “But there are other people who for their own purposes are trying to make an issue about this.”

In Saturday’s email to members of the executive committee, Sutton wrote: “While I believe the goal of CAGE to stop the expansion of gambling is consistent with our platform, it would be better for me not to serve as a part of any outside organizations while I serve as State Chair. Further, I have decided to deactivate my public affairs company for the duration of my term as chairman as well. I will continue to be a vigorous and unapologetic defender of our platform, our candidates and our elected officials and I do not want anything detract from that.”

Sutton is not the first political figure criticized for wearing two hats. Pat Anderson, GOP committeewoman, was called out by activists for taking on Canterbury Downs as a lobbying client. Former Senate majority leader Roger Moe, now a lobbyist, had to suspend his client work while working on the Mark Dayton transition team. And deputy GOP party chair Michael Broadkorb took a swipe from DFLer s for his dual roles as an unpaid deputy party chair and paid communications director for the Senate Republican caucus.

Sutton explained his decision to form a political consulting firm in addition to his duties as party chair: “I wanted to stay a volunteer and I thought I could [do] some things on the side that wouldn’t conflict with the party. The fact of the matter [is] I didn’t do a whole lot with it. In hindsight, I should have done something different.”

Sutton maintains members of the GOP executive committee are behind him. “I’ve personally got a lot of positive feedback,” he said.

The executive committee meets Thursday and Sutton predicts there will be no “melodrama.” But some members of the committee say they will ask Sutton tough questions about his involvement with CAGE, and Sutton acknowledges, “people will speak their piece.”