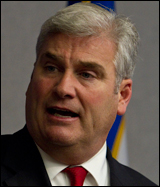 Thanks to recent Republican gubernatorial candidate Tom Emmer, the check really is in the mail for Minnesota counties waiting to get repaid for their recount expenses.

When Emmer heard that around 20 counties were still waiting for the state Republican Party to reimburse them, he contacted the county auditors directly and sent them checks from the balance in the Tom Emmer for Governor campaign fund – about $20,000 to $25,000, he estimated.

“This is not my responsibility, but I feel it’s my obligation,” he said.

Emmer said he was startled to learn that the counties were still waiting for reimbursements almost six months after the recount was finalized. The invoices for such services as copying costs and requests for information had gone to the Republican Party which, like the DFL, is stretched financially after the 2010 election expenses.

Minnesota GOP Chair Tony Sutton said he had not heard directly from Emmer about this move but said, “I’m going to call him right now and we can compare notes” about which, if any, counties still have unpaid bills.

The county auditors did seem a little surprised to have Emmer on the other end of the line, he acknowledged (“I would just call and ask if they had an outstanding bill”), but they were grateful for the thanks and the money.

“Some of them said they truly appreciated the phone call,” he said. “If nothing else, regardless of whether you’re Democratic or Republican, these people make the system work and I don’t think they ever get a call that says thanks.”

It also leaves the campaign with some explaining to do to the Minnesota Campaign Finance and Public Disclosure Board. Usually, once all vendors are paid, campaign surpluses are designated to another campaign or political unit, like the Minnesota GOP, but Sutton believes such payments are a legitimate campaign expense.

There will be some kind of supplemental reporting, Emmer says.

“Whatever needs to be filed will be filed, and the folks over at the campaign board will know every nickel,” he said. But when it came to reimbursement, Emmer was inclined to act right away. “For all I know they will tell me I wasn’t supposed to do it this way but, sorry, these people need to get paid,” he said.

Emmer said he would be contacting the campaign finance board before the end of the week to let them know of the disbursement. And if Emmer’s action closes the books on this part of the GOP recount expenses, “that would be great, that would take a load off my mind,” said Sutton.