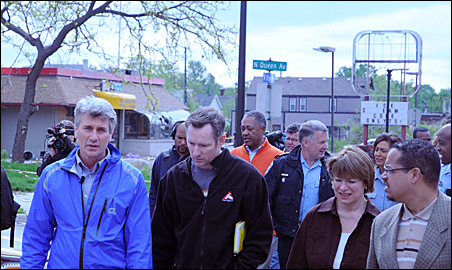 The decision announced Tuesday by the Federal Emergency Management Agency is a disappointment to Minneapolis Mayor R.T. Rybak and other Minnesota officials who had lobbied the White House and FEMA for the money.

It’s also an example of what state and local officials around the country will likely be confronting more and more when they ask an increasingly frugal FEMA to help them to cope with natural disasters: there’s not enough federal money to go around.

After President Obama declared parts of Hennepin and Anoka County as federal disaster areas, that opened the door for FEMA to pay for up to 75 percent of all repair and recovery efforts for public infrastructure, but not individuals’ property. Lawmakers, including Rybak, Gov. Mark Dayton, Rep. Keith Ellison and Sens. Amy Klobuchar and Al Franken, had asked the president and FEMA to expand that assistance to include individual aid.

“While we’re disappointed, our job now is to move forward and evaluate all our options for getting the greatest amount of help, including financial help, to the greatest number of people as quickly as possible,” Rybak said after FEMA’s announcement. Rybak has been invited to the White House on Monday to meet with Obama and federal officials to explore options for federal assistance.

The last time Minnesota got FEMA’s individual assistance aid was 2009 when it received more than $2.4 million to clean up after Lake County ice storms, severe spring storms and Red River basin flooding. Since then, it’s received millions in public assistance aid, but as lawmakers begin piecing together the country’s 2012 fiscal budget, experts warn the nation’s disaster outlook means, initially, there might a shortage of money.

This year, Obama has signed 42 disaster declarations, including two for Minnesota, releasing millions of dollars for repair and recovery efforts following natural disasters. But he’s also proposed spending less in 2012 for the fund that money comes from, and Republicans have sought to increase that funding by cutting grants to other programs. 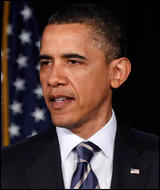 Meanwhile, officials project so much disaster damage in 2012 that the fund is in danger of running out. That means disaster funding for recovery efforts might be gone as soon as January, leaving states and victims to fend for themselves while they await emergency federal aid.

Obama proposed spending $1.8 billion on FEMA’s Disaster Relief Fund during the 2012 fiscal year, which starts on Oct. 1. That’s nearly $800 million less than it received in 2011.

But last month, the Republican-controlled House voted to give FEMA $3.6 billion for the fund, but that came at the expense of a Department of Energy grant program.

A White House spokeswoman said Obama’s recommendation for 2012 was due to a formula based on past years’ necessary disaster funding. The $2.65 billion it received in 2011 was initially expected to cover some disaster recovery effects into the 2012 fiscal year, though how far in, and if at all, depends on the severity of the weather this year.

Complicating those plans was a string of recent severe weather events through the country, including the tornadoes and flooding in Oklahoma, Missouri and the Twin Cities. At a Senate committee meeting last week, FEMA administrator Craig Fugate could not say whether current funding will be able to cover those disasters and others through the summer without forcing the department to ask Congress for emergency funding.

“This year has been rather exceptional,” he said.

Minnesota sees funds for floods, tornados
Minnesota, with its humid and stormy summers, cold and snowy winters and its rivers’ propensity to flood, is naturally positioned to be hit by a large number of disasters.

Minnesota has received 47 disaster declarations since 1953, the 14th most in the country. Last decade, the state received more than $382.8 million in disaster relief Funding. 2010 was the state’s costliest year, as severe Red River flooding and a record tornado season led FEMA to spend $81.5 million on recovery efforts in the state. 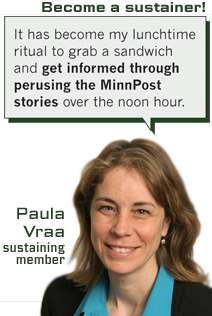 So far this year, Obama has declared disasters following the tornadic storms in Hennepin and Anoka Counties and the flooding in the Red River and Minnesota River valleys.

Such declarations mean federal funds can be used to pay for up to 75 percent of the costs associated with clean-up, repair and replacement efforts. There are two main types of funds: those that provide immediate assistance to victims (such as providing food and water, tarps to cover up damaged property, etc.) and after-the-fact recovery funds that assist with repairing public infrastructure (called “public assistance”) and private homes and businesses (“individual assistance”).

Minnesota Homeland Security and Management Director Kris Eide said seeking and receiving disaster funding isn’t a competitive process among states, but it’s one that requires states to best justify why they need funds. She called the process, “subjective.”

“It’s based on the story that we tell and how FEMA perceives that story,” Eide said.

Finding funding
But in order to get disaster aid, there needs to be a fund from which to draw it.

A disaster relief fund shortfall would require Congress to pass emergency funding to keep it afloat, leaving those affected by storms to fend for themselves until the funding is approved.

Louisiana Sen. Mary Landrieu, the Democratic chairwoman of the Senate panel tasked with funding FEMA, said at a committee meeting last week that that breaking point could come as early as January.

As FEMA draws closer to depleting the fund, it will stop providing recovery funds in order to preserve those needed for immediate disaster relief, which Landrieu’s office warns could happen by November. That means states or individuals that would usually rely on FEMA to pay for back-end recovery would either need to pay for those rebuilding efforts themselves or cease them altogether.

Given the outlook, Landrieu has been pushing the White House to request an emergency FEMA appropriation before her committee begins marking up the budget bill later this summer.

But House Republicans have insisted on cuts to other areas of the budget to pay for any emergency funding.

This was evident when the House passed its FEMA funding bill in May. The bill maintained last year’s disaster-relief funding level — $2.65 billion — and provided $1 billion in extra emergency funds preemptively, according to the Majority Leader’s office. To pay for it, the House cut a Department of Energy grant program that had paid for manufacturing high-mileage vehicles. Raising Landrieu’s ire, the bill cut funding for other programs, such as responder grants.

When asked in May about a hypothetical emergency relief package to support victims of the Joplin, Mo., tornado, House Majority Leader Eric Cantor said: “If there is support for a supplemental [appropriation for disaster relief], it would be accompanied by support for having pay-fors to that supplemental.”

“Pay-for” is a term used to describe a tax increase or spending cut to offset the new spending. Republicans are staunchly against tax increases.

On the matter of the disaster relief fund as a whole, a Cantor spokesman offered this statement: “There is certainly a federal role in helping victims cope with natural disasters and tragedy, which is why House Republicans provided more than double the funds requested by President Obama for FEMA Disaster relief while finding real savings elsewhere. In a $3 trillion budget, there is no question that spending can and should be prioritized to ensure that those most in need are cared for in a responsible fashion.”

At a committee meeting last week, Landrieu seemed caught between both the president’s and the House’s proposals.

“Without additional funding [to Obama’s budget request], it is very likely this fund will be exhausted as early as January 2012. Recovery efforts … will therefore cease,” she said. But, “it makes no sense to cut funding to the agencies that must prepare for and respond to future disasters, to use that money to pay for the cost of past disasters.”