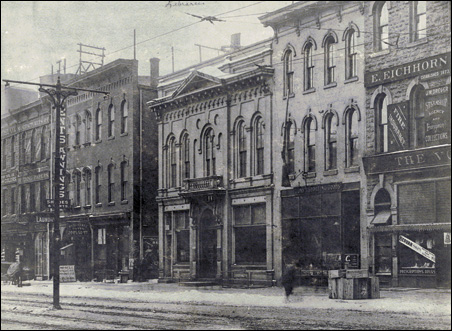 Stepping off the elevator onto the fourth floor of the Minneapolis Central Library, one is hard-pressed to miss the entrance to the Special Collections reading room. Its door is bracketed by a large wooden arch – an architectural fragment from the city’s first library building. In the original structure, such a detail would have been unremarkable – just one ornate carving among many. Today, the arch dominates the austere fourth-floor lobby, and draws the eye toward the stacks of reference materials beyond.

Inside, the Special Collections Library is sparse and contemporary. At a long reading table, local writer Mary Treacy turns the pages of a handsome, antique tome. The volume is entitled “Morris’ British Birds,” and it is a small part of the library’s vast collection of rare books and manuscripts. Such rarities form the heart of the Minneapolis Library’s original collection, and they have served generations of scholars, artists and historians.

A former librarian herself, Treacy has turned her attention in recent years to chronicling Minneapolis history. “Everything I know I learned right here,” she says.

The Hennepin County Library system has changed dramatically since its modest beginnings as a rural book wagon service in the early 1900s. According to senior programming librarian Johannah Genett, the system now has over 5 million items in circulation. Hennepin County saw 5.8 million system-wide visitors last year, and had nearly 20 million visitors to its website.

Prior to the 1920s, library service in Hennepin County only existed on a municipal level, with the Minneapolis Public Library at its heart. The Minneapolis Library was founded in 1885, and its first building opened in 1889 at the corner of 10th Street and Hennepin Avenue. Other branches were added in subsequent years. After a 1921 tax levy provided for the establishment of a county library service, the Hennepin County book wagon took up residence at the Minneapolis Library’s Central branch. County service gradually expanded in the years that followed, as metro area suburbs grew and flourished.

While there were early overlaps, the two library systems operated independently from each other for many years. This changed in 2008, when the Minneapolis Library merged into the broader Hennepin County system, creating the current configuration of 41 locations in the west metro area. Interestingly, the founding of the Minneapolis Public Library was the result of a collaboration with yet another organization – one that had its roots in the lumber and milling trades of the 1800s.

Athenaeums – essentially literary clubs – were common features of East Coast cultural life. Boston and Philadelphia were among the prominent cities that featured such institutions. Settlers from the east missed the amenity, and established a nascent organization in Minneapolis, according to the writings of Betty Engebretson, the Athenaeum’s former librarian. Bruce Benidt – the author of a 1984 history of the Minneapolis Library – described the situation thusly: “Those who settled in Minneapolis brought from New England a solid tradition of education and an understanding of the enjoyment and wisdom of the printed word. Besides, they had a lot of long winter nights to get through.”

According to Benidt, the Athenaeum was organized in 1860 by a group of Minneapolis business owners in the wake of a talk given by travel writer Bayard Taylor. Bookstore owner Thomas Hale Williams was instrumental in the establishment of the Minneapolis Athenaeum, and helped to guide its formation. Williams had previously served as the librarian of the Providence, R.I., Athenaeum, and he based the charter of the Minneapolis Athenaeum largely upon that of his previous institution.

The organization grew over the course of the late 1800s, weathering a series of financial challenges. Prominent lumberman T.B. Walker became an Athenaeum shareholder, and his influence prompted major changes in the governance of the organization.

Bruce Benidt described Walker as a “dedicated capitalist” who was also focused on providing public access to cultural amenities. For instance, Walker often opened his home to the public to view his art collection at no cost. In this same vein, Walker was an early proponent of the establishment of a free public library. According to Walker’s biographer, Clara Nelson, Walker viewed a free library as “the best preventative of vice and crime, of labor troubles, of intemperance and riots.”

Walker agitated for broader public access to the Athenaeum collection, and eventually urged a partnership between the group and the embryonic Minneapolis Public Library. A 99-year operating agreement was forged between the two organizations, with the Minneapolis Library providing space and staffing support, and the Athenaeum providing the new library’s foundational book collection.

The Athenaeum collection
Today, the Minneapolis Athenaeum still exists as a discrete organization, with its own board and endowment. Sharon Charles – head of community and patron services for the Hennepin County system – says that the Athenaeum continues to share its collection with Hennepin County. The initial operating agreement was renewed in 1985, but Charles notes that it became void in 2008 when the Minneapolis Public Library was absorbed into the Hennepin County system. Since that time, a new operating agreement has been under discussion. In the meantime, the county has continued to provide shelter and support to the Athenaeum’s collection.

Parts of that collection are still housed in the Special Collections Library of the Minneapolis Central Branch, while other components are shared more broadly. Today, more than 100,000 of the Athenaeum’s books are in general circulation within the Hennepin County system.

The Athenaeum’s rarest tomes include early travelogues about the exploits of Father Hennepin and Louis and Clark. A few of its most valuable works – the bird folios of John James Audubon – require a security guard to supervise their use.

“We have a diverse set of people who use the Athenaeum collection today,” says Special Collections Librarian Heather Lawton. She relates that high-school students frequently utilize its North American Indians collection for History Day research projects. St. Catherine University requires students to study the collection as part of its library studies degree program. Lawton said that she also makes books in the collection available to a duck decoy artist who uses it on a recurring basis.

Public library expansion
After the Minneapolis Library opened its doors in 1889, the city’s rapid growth spurred an expansion of the library’s services and locations. Librarian Johannah Genett noted that the time period from the late 1800s to the 1910s saw branch libraries open on Franklin Avenue and elsewhere throughout the city. Newly arrived Swedish and German immigrants were frequent patrons of these satellite facilities.

Treacy recently used the resources of the Hennepin County system to research the largely forgotten story of the “New Boston” branch of the Minneapolis Public Library – a predecessor of the current Northeast Community Library. According to Treacy’s research, the New Boston branch was a circulation facility that operated from a commercial storefront at 24th and Central Avenues. The branch served new immigrant communities, provided adult education, and worked on projects in collaboration with area schools. The New Boston storefront lasted until the opening of a Carnegie-funded public library building in 1907.

The records of the New Boston branch that Treacy accessed are currently housed within the Special Collections section of the Minneapolis Public Library. Like the Athenaeum collection that it is built upon, the Minneapolis Library acquired a substantial volume of rare and historical materials over time.

Special collections – a window on history
On a weekday morning, Treacy sits at a reading table examining a selection of rare books. Librarian Heather Lawton approaches with two slim volumes – each part of the Heffelfinger family’s “Aesop’s Fables” collection – some of which date from 1672.

Treacy is quick to highlight the diversity of the library’s Special Collections, as well as its historical depth. Its items range from period restaurant menus to World War II propaganda posters, she says.

Treacy currently writes history articles for the Northeaster newspaper, as well as for her Twin Cities Daily Planet-linked blog. She grew up in St. Paul, but eventually relocated to Northeast Minneapolis. Those environs figure prominently in her current writings.

“I live in Windom Park,” she says, “which is named after William Windom, who could have been president.” Using the library’s resources, Treacy wrote an article on Windom, who practiced law in Winona and served in the Minnesota Legislature. He later sought the Republican presidential nomination in a race whose eventual winner was James Garfield.

Connecting past with present
Despite the changes of over a century, librarian Johannah Genett maintains that the services provided by the Hennepin County Library are much as they were at the system’s founding. The system still provides broad-based access to individuals and families, as well as more specialized reference services. “The exhibit that’s opening on the 30th will cover all of these areas,” she says.

Treacy notes that the library system’s services are an invaluable way to maintain a sense of social continuity and historical context.

“We live in what Harland Cleveland called a ‘Temporal-Centric’ society,” she said. For her, the library provides a way to ensure that the public does not forget its own past.

The Hennepin County Library’s 125th anniversary will be celebrated tonight at 7 in Pohlad Hall at the Central branch of the Minneapolis Public Library.

The Hennepin County Library system – connecting past with present