Many wealthy executives in the financial sector have written checks to help Tim Pawlenty.

Tim Pawlenty may not have great name recognition around the country but he does have one very important thing for a presidential candidate: a hand in the pocket of Texas billionaire Bob J. Perry.

Perry, a homebuilding tycoon with a $600 million fortune, is a high roller among Republican donors.

Perry also has a reputation for financing negative ads. He made national headlines in 2004 with his mega contributions to Swift Boat Veterans for Truth, which ran a controversial ad campaign that questioned Democratic presidential candidate John Kerry’s service in Vietnam. Perry contributed $4.45 million to underwrite the attack ads that helped sink Kerry’s presidential bid. 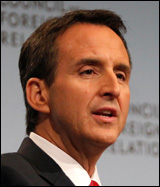 Less well-known is a similar attack ad campaign that Perry bankrolled in Minnesota in 2006, when Pawlenty was in danger of losing his office as Minnesota governor.

Pawlenty’s challenger, Mike Hatch, maintained a small but consistent lead over the incumbent governor going into the final weeks of the race. Pawlenty “needed a Hail Mary,” said Ken Martin, chairman of the Minnesota Democratic-Farmer-Labor party and Hatch’s campaign manager in 2006.

Perry tossed the pass Pawlenty was looking for — a $500,000 check that directly funded a flood of attack ads against Hatch in the final days before the election. Pawlenty won by a mere 21,108 votes, just under 1 percent.

“It clearly had a huge impact in that election,” Martin said. “If it wasn’t for Bob Perry, Tim Pawlenty’s political career would be over — before it started.”

The negative ads focused on an ethics investigation Hatch was later cleared of. The narrator intoned: “You’re Mike Hatch, and you’ve got problems. You’re under investigation for influence peddling and threatening a judge. You’ve told the press, ‘Sometimes you’ve got to make deals with the devil.’

“Now that he’s running for governor, don’t let his problems become ours.”

Minnesota voters were unaware of who financed the anti-Hatch ads until well after the election because Perry’s donation to a group called A Stronger America fell between state-required campaign reporting deadlines.

The negative ads spurred the Minnesota Legislature to revise state campaign finance laws in 2007, requiring new donors to register with the state no later than 24 hours after they begin spending in the state. Candidates in Minnesota are also required to report any large donations that come in between reporting periods, said Gary Goldsmith, the nonpartisan executive director of the Minnesota Campaign Finance and Public Disclosure Board.

Both changes were a direct result of Perry’s last-minute donation, Goldsmith said.

What Bob Perry looks for in candidates
Five years later, Perry maintains a keen interest in the Minnesota politician.

Perry’s spokesman declined to comment on the relationship, but political analysts in Texas said the homebuilder looks for three key things in the candidates he backs:

The last one is perhaps the most important to Perry, said Bruce Buchanan , political science professor at the University of Texas at Austin.

“He wants to be a king maker,” Buchanan said. “That’s why he doesn’t choose candidates on the far right, even though they may be closer to his true preferences.” 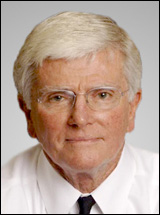 A fiscal and social conservative, Pawlenty checks all the right boxes, said Larry Jacobs , director of the Center for the Study of Politics and Governance at the University of Minnesota. Pawlenty “is a fiscal conservative who can be counted on to restrain spending and to block tax increases,” he said. “Pawlenty is also a social conservative. He didn’t really play that up when he was in Minnesota.”

Pawlenty supported tort reform to limit excessive awards and created a low-regulation environment favorable for businesses and job growth while at the helm of Minnesota politics, said Charlie Weaver , who was Pawlenty’s chief of staff in 2003 and is now executive director of the Minnesota Business Partnership.

“He was a strong defender against those who wanted to raise taxes, particularly job-killing taxes,” Weaver said.

Raised Catholic, Pawlenty began attending Wooddale Church, an evangelical mega church, with his future wife, Mary. The senior pastor, the Rev. Leith Anderson, officiated at the couple’s wedding in 1987. Since 2006, Anderson has also been president of the National Association of Evangelicals, a group that recently ranked Pawlenty at the top of an informal survey of its members

“His faith is something that gives him a strong rudder, and that’s really important when anyone is sizing up presidential candidates,” Weaver said.

Texas politicos familiar with Perry doubt his donations to Pawlenty are motivated by religion.

Pawlenty’s appeal in the presidential race is that he hasn’t embarrassed himself, according to Chicago Tribunecolumnist Steve Chapman.

“So far, Pawlenty hasn’t impaled himself on any silly issues, made himself a laughingstock at the White House Correspondents’ dinner, or been exposed as a weathervane,” Chapman wrote in May.

Or, as Jacobs put it, “He doesn’t have the fatal flaws that everyone else seems to have.”

The whys behind Perry’s donations are not important — the donations are, said Andy Wilson, a Texas-based campaign finance policy analyst for the nonprofit group Public Citizen.

“Trying to figure out why Bob Perry is spending is like asking why the Grinch wanted to steal Christmas,” Wilson said. “I mean we can try and guess what his motivations are, but what’s more important is what he’s actually doing.”

Perry’s history of negative ads
In addition to direct contributions to candidates, Perry has been systematically financing attack ads.

Best known is the Swift Boat Veterans for Truth campaign in 2004. The ads accused Kerry of lying about his service and betraying fellow Vietnam veterans with accusations of war crimes. They also questioned the validity of the service medals awarded to him, including his Purple Heart.

At the time, even Republican Sen. John McCain condemned the ads, saying “I think the ad is dishonest and dishonorable.” The ads gave birth to a new phrase in political lexicon: “to swift boat” with attack ads. Factcheck.org found that the ads’ accusations were “contradicted by Kerry’s former crewmen, and by Navy records.”

Perry was involved with many more negative campaigns. In 2008, he donated $95,000 to Empower Texans PAC, which aired an attack ad against Democrat Joel Redmond, who was running for an open House seat in the Texas legislature against Republican Ken Legler. Critics said the ad had racist undertones. It featured a photo of Redmond with minority lawmakers including presidential candidate Barack Obama, and a caption that read, “Bad company corrupts good character.”

Perry donated $9.7 million to 527 political groups in 2006, according to the Center for Responsive Politics. According to CRP and Texans for Public Justice, his donations included:

In 2010 Perry joined forces with fellow Texan Karl Rove, donating $7 million dollars to the 527 group, American Crossroads. Advertisements sponsored by Crossroads attacked a slew of Democratic candidates across the country.

In April, Pawlenty’s 2012 campaign announced Alison McIntosh would spearhead his fundraising efforts in the Lone Star State. McIntosh raised $42 million as the Texas finance director for McCain-Palin 2008. She also was a key fundraiser for Swift Boat Veterans for Truth.

Taking money from a donor with a lengthy track record of dirty politics speaks to Pawlenty’s character, said Martin, whose candidate was “swift boated” in 2006.

“It really calls into question his integrity. … It’s easy to travel to another state and put on this aw-shucks mask,” Martin said. Pawlenty “tries to paint the picture of being Minnesota nice. … The fact of the matter is he associates with people who fund his campaign who are pretty classless characters.”

Perry’s money may help Pawlenty build a much needed national presence. Even as he formally announced his candidacy on May 23, and followed it with a national media blitz, only 50 percent of Republicans surveyed by Gallup knew who he was. Against other GOP candidates, he consistently pulls single-digit support.

Pawlenty gained some national attention in 2008, when he was on the short list of those being considered for a running mate to McCain. McCain ultimately chose Sarah Palin, but Pawlenty earned a political ally in McCain by leading the Arizona senator’s presidential exploratory committee in 2008 and bringing in more than $500,000 in contributions.

Pawlenty may have competition for Perry’s attention, especially if Texas Gov. Rick Perry decides to compete for the GOP presidential nomination. Bob Perry gave $2.5 million to Rick Perry (no relation) between 2000 and 2010.

Pawlenty’s campaign did not respond to eight requests for comment, made by email, text message and telephone.

Delal Pektas and Kelsey Sheehy are reporters for Medill News Service, a graduate program of Medill School of Journalism at Northwestern University. The Center for Public Integrity and its  iWatch News  produce original investigative journalism about significant public issues.

By Delal Pektas and Kelsey Sheehy