WASHINGTON — On Oct. 10, Eric P. Schwartz will take charge as dean of the University of Minnesota’s Hubert H. Humphrey School of Public Affairs, bringing with him a résumé that could stretch from the front door of Northrop Auditorium down the mall and across Washington Ave. to Coffman Union.

Schwartz is currently the State Department‘s assistant secretary for population, refugees and migration. Before that, he was the executive director of the Connect U.S. Fund foundation; before that, the United Nations secretary general’s deputy special envoy for tsunami recovery; before that, the second-in-command of the U.N.’s Office of the High Commissioner for Human Rights; before that, the senior director and special assistant to the president for multilateral and humanitarian affairs; and so on.

“My breadth of policy experience is probably one of the reasons why I may have been seen as a good fit for this job,” Schwartz said in a Wednesday interview.

But Schwartz’s professional life extends beyond international government bureaucracy. He’s held fellowships with the Council on Foreign Relations and the U.S. Institute of Peace, and was a public policy scholar at Washington’s Woodrow Wilson International Center for Scholars. He was also a guest lecturer at Princeton University’s Woodrow Wilson School of Public and International Affairs.

So, Schwartz said, his history “gave [university administrators] a sense of confidence that I’ve operated in an academic environment.” 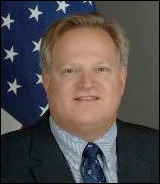 Given Schwartz’s experience in government agencies and academia, university officials said they have high hopes for the Humphrey School under him.

“Eric Schwartz is a trusted leader with a keen sense of collegiality and an exhaustive commitment to public service and to the common good,” Provost Tom Sullivan said in a statement. “I am confident he will be an outstanding dean in every way.”

A school caught between opposing forces
After the Board of Regents approves him for the position, Schwartz will take over a school caught between opposing forces: high ambition and a shrinking budget. The university has made a point to be considered one of the world’s top public research institutions, and the Humphrey School fits into those plans, but at the same time, the university is looking at a potentially dramatic decrease in state support over the next two years.

In May, the Legislature passed a $68.6 million yearly cut to the university’s state appropriation, but Gov. Mark Dayton vetoed that plan. A final budget agreement is still some time off.

But Schwartz said he and current and future university administrators share the same main goals for the Humphrey School: improve its prestige, raise its profile in policy discussions and bring in more revenue. All those goals play into one another.

Potential for increased support
Some Humphrey professors, for example, are doing work researching international development topics. “That kind of work should be injected into policy discussions in government,” Schwartz said, and by increasing the school’s role in those discussions, “that actually increases the potential for additional financial support” from foundations or organizations that might not have looked at the school before.

“If the school is seen as an active contributor to policy discussions, foundations and other institutions might see it as an important target for support,” he said

Along those same lines, Schwartz said he hopes to “strengthen and sustain” Humphrey’s academic offerings for students. He said he’ll also emphasize expanding the school’s post-graduation job and internship offerings.

At the State Department, Schwartz said he commonly runs into students he taught while at Princeton. He said there is no reason Minnesota graduates shouldn’t also find themselves working in Washington, or in New York City with the U.N., or working for other government organizations in Geneva or Rome.

Schwartz has been there, and now his goal to help get Humphrey graduates there as well.

“That would be a major objective,” he said.

Devin Henry is an intern in MinnPost’s Washington Bureau.