With a cloud of uncertainty floating over the prospects for a new Vikings stadium, speculation comes and goes about whether the team might departure from the Twin Cities when its Metrodome contract expires in 2012.

If the Vikings were to leave, an era of professional football in Minnesota, spanning a half century, would come to an end. That era began on Sept. 17, 1961, when this region’s NFL expansion team played its first game in Bloomington’s Met Stadium.

In later seasons, the Vikings would face blizzards and bone-chilling temperatures in the open-air Met. But that first game in 1961 was played on a balmy fall day when the thermometer topped 70 degrees. Opening day was all the more successful because the new NFL team triumphed over its opponent, the Chicago Bears, 37 to 13.

“How could anything top this,” declared NFL Commissioner Pete Rozelle, who had come to Bloomington for the Viking’s first game. “It was fantastic. A start like this with your club, in its first game. And Tarkenton. What a rookie!”

Quarterback would stay till ’67 trade
Rozelle, of course, was referring to Fran Tarkenton, then 21 years old, who would throw his first NFL touchdown pass by the end of the game’s second quarter. The young quarterback, soon to emerge as one of the team’s stars, would continue to play for the Vikings until he was traded to the New York Giants in 1967.

Football mania had been building in Minnesota for a year and half, ever since Rozelle, the league’s newly appointed commissioner, announced in January 1960 that the Twin Cities would receive an NFL franchise. 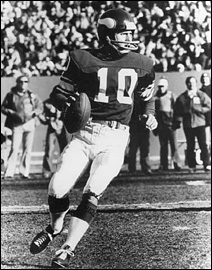 The NFL decision to award the Twin Cities an expansion franchise came after some maneuvering by the league owners who controlled the NFL’s expansion process.

George Halas, the owner of the Chicago Bears, who also chaired the league’s expansion committee, had pushed for a Twin Cities franchise, along with one for Dallas. But Halas had to overcome opposition to the expansion from George Preston Marshall, who owned the Washington NFL team. Marshall had initially vowed to derail the expansion but eventually backed down when he saw that Halas had lined up the other NFL owners to support the new franchises.

Almost until the last minute, when the league owners finally made their decision at their Miami Beach meeting, the Vikings’ new owner, Max Winter, was not sure that he would get the expansion franchise.

‘Rebuffed at every turn’
“We appeared to be rebuffed at every turn,” Winter said soon after the decision was final.”In fact at noon, I thought we were licked, But at 7 p.m. came the good news. Naturally, I was overwhelmed because we have fought so long to reach this goal.”

When he heard the news, the Minneapolis Tribune’s Dick Cullum could hardly contain himself.”WELL. WE MADE IT,” Cullum declared breathlessly. “The news service printer punched it out letter by letter. Minneapolis-St. Paul will play in the National Football League in 1961. There is a pleasant numbness of shock as we playfully torment ourselves by not letting the full realization come through all at once. 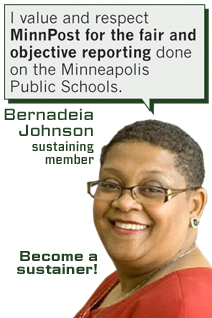 “But there it is – Johnny Unitas, big Jim Brown, Lenney Moore, Big Daddy Lipscomb … and all the rest of the earth shakers will be playing here- for keeps. … This is the first big break that this area has had in its many years of striving for big league status. It follows, perhaps inevitably, a figurative handshake between Minneapolis and St. Paul which put the cities in double harness.”

The Minneapolis Star’s Charles Johnson was more restrained but equally pleased with the news.

“Ten years of frustrations, disappointments, delays are at an end for the cities of Minneapolis and St. Paul,” Johnson noted. “After a decade of intensive efforts behind the scenes to get either city a major league team, the goal was reached in Miami Beach Thursday night.”

Opening day a year away
Winter was pleased that the goal had finally been reached, but he was relieved to know that opening day was still more than a year away. “We would have been the doormat of the league had we been given a franchise for this year,” Winter said. “Now we will have a year to get ready for the 1961 season. We will get 36 seasoned players from rosters of the NFL teams. We will be able to set up a scouting staff and hire other people necessary to make this franchise run smoothly,”

Winter also knew that it would take a year to expand seating at Met Stadium. As one of its conditions for awarding the franchise, the NFL had stipulated that the Bloomington sports facility needed to be expanded to hold from 35,000 to 40,000 seats. Almost immediately, members of the Metropolitan Stadium Commission signaled that they were ready to accept the NFL stipulation.

“The stadium will have to be expanded,” the Stadium Commission’s chairman, Gerald Moore, declared confidently. “I am really overwhelmed,” Moore added. “This is the reward in our battle since 1952 to secure major league sports for the Twin Cities.”

Through the 1960s and into the ’70s, the Vikings would continue to play at Met Stadium. As an open-air venue, the Met had its advantages, particularly for the Vikings during the frigid late fall and early winter game days, when they faced opponents who were based insunnier climates.

Outmoded, obsolete
But the time would come when the Met would be considered outmoded and obsolete. Soon the Vikings and their fellow tenants in Bloomington, the Twins, were clamoring for a new, more modern indoor stadium that would help them draw more fans and revenues. They got what they wanted when the Hubert H. Humphrey Metrodome was built in downtown Minneapolis in 1981, to serve the University of Minnesota Gophers as well as the state’s two major league professional teams.

Long-time local sports writer Joe Soucheray lamented the demise of the open-air Met Stadium when it was replaced by the blander but more comfortable Metrodome.

“Why have we let our sports become so hauntingly gray?” Soucheray asked rhetorically. “Every single game in a domed stadium is by necessity identical to every preceding game played there. No rain. No wind. No sun. … Weather has played such an important role in the shifting fortunes of our teams … that without weather the teams will become more and more impersonal to point where we cannot make ourselves care about them any more than we care about the workers behind the walls of any bland building.”

Soucherary’s lament would be heard well into the 21st century, when new stadiums without roofs would bring big-time sports in Minnesota back outdoors.