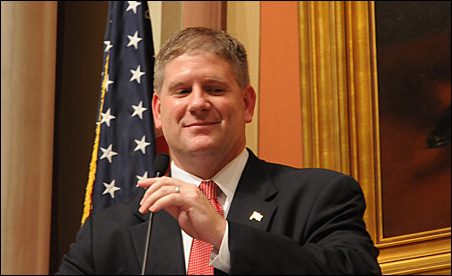 The early hours this morning didn’t so much mark the end of the 2011 legislative session as they did the beginning of the 2012 campaign.

Yes, state legislators, often holding their noses, finished up a massive stack of budget bills, a bonding bill and the Legacy funding bill at about 3:45 a.m., officially bringing an end to perhaps the longest government shutdown in U.S. history.

And the governor, at bill-signing ceremonies this morning, will declare the state soon open for business.

But throughout the night, DFL legislators kept pointing to Republicans and referring to the compromise that closed the deal — the shifting of $700 million in K-12 funds and the sale of tobacco bonds — as “your deal.”

Republicans countered by saying that the governor had vetoed their deal, a cuts-only budget proposal that would have had government running on a $34.2 billion budget.

Throughout the afternoon and night, there were more recesses than debates. In fact, even when the bodies were in session, the debates tended to be quick and without passion.

DFLers go into occasional attack mode
But on occasion, DFLers would go into attack mode.

At about midnight, for example, Sen. Tom Bakk, the DFL’s minority leader, tore into the omnibus tax bill, the measure that included the sale of those tobacco bonds.

Bakk rubbed in their faces what had been a familiar theme for many Republicans.

“The pennies,” said Bakk, his voice filled with sarcasm. “Don’t you just love the pennies. Not one penny more.”

Bakk spoke of the penny lapel pins and the penny posters on the doors of many hardline Republican legislators.

Then, shaking his head, he said he finally figured out what the “not a penny more” slogan meant.

“We’re not going to tax millionaires one penny more.”

On and on he went.

Give Bakk credit. He held the attention of the body, sometimes because he went in directions that seemed sort of strange.

For example, Bakk, admitting he was not much of a “song guy,” started talking about a 1970s tune he’d been thinking about during the day.

“Is this all there is?” he said, even reading a verse from the tune “Is That All There Is?” popularized by Peggy Lee in 1969. “We’ve been here since January, and this is the best we could do?”

Later, after the vote on the bill, which Republicans had to carry on their own, Sen. Geoff Michel, the Republican’s assistant majority leader, smiled when he talked about Bakk’s speech.

“I was afraid for a minute there he was going to start singing,” Michel said.

Michel ‘previews’ GOP election message
Actually, on the floor of the Senate, Michel had responded to Bakk and shown a large part of what the Republican message will be to voters in the elections of 2012.

The new message, Michel insisted, was economic growth and reform. Republicans, he said, are offering an efficient “21st Century state government, not a 1970s model.”

There were side dramas being played out amid these overriding themes of which party is the more responsible.

The biggest dramas were within the Republican caucus, where the most fiscally and socially conservative members had to be persuaded by their leaders to go along with the parameters of the deal.

A number of sources said that during the first long recess called by Republican leaders, a recess that began only a few minutes after the special session began, there was considerable tumult and shouting.

“People had to vent,” said one legislator. “Believe me, they did.”

Laughing, some Republican senators said that Senate leadership had come up with a far more persuasive way to keep them in line than arm-twisting. Food. The foyer to the office of Senate Majority Leader Amy Koch was filled with food. The brats were especially savored by even the most disgruntled members of the Republican flock.

“Great convincer,” said a senator as he took a late-night bite of a brat.

Giving up the “not a penny more” stance was only one problem the Republican leadership dealt with in its caucus.

Social issues offer litmus test
There also were the social issues that had been seen as vital to some conservatives, meaning the vote on the higher education bill was one of the litmus tests of the night.

DFLers hated the massive cuts in the higher bill. (The University of Minnesota takes a 15 percent cut; MNSCU, a 13.5 percent hit.)

There were more obscure things in the higher-ed bill that also were offensive to some DFLers.

Sen. Dave Tomassoni, DFL-Chisholm, bemoaned “the repealers” in the higher-ed bill. The requirement, for example, that state colleges and university bookstores sell only American-made clothes had been stripped from the bill.

“That’s bad for jobs,” said Tomassoni, who also mourned the passing of a program of achievement grants.

But Republicans were facing a stickier issue. Much to the joy of Minnesota Citizens Concerned for Life, the Republican majority had put language opposing many forms of stem cell research and cloning into the higher-ed bill.

That language, however, had been stripped from the bill during the negotiations between the governor’s administration and Republican leadership in the days leading up to the special session. (Other social legislation also got redlined in other bills in those negotiations.)

But it was the higher-ed bill that was seen as the litmus test of whether social conservatives would swallow hard and accept the loss of their language.

In the end, they did.

Those social issues, however, are sure to emerge again in the next session in January — and, of course, in the campaigns that will follow.

‘Reform’ certain to be campaign theme
“Reform” also will become a major part of the Republican dialogue.

In fact, they were trying to claim many “reform” victories in the bills that bounced and rattled through the special session process.

But those “reforms” were relatively small, compared with the big plans Republicans had carried with them when they took over majority status in January.

Gone was the plan to cut the state workforce by 15 percent. Gone were some of the major efforts to cut the bargaining power of school teachers. Gone, too, was the plan to shutter the Trade Office, in the name of reform, and virtually cut the Human Rights Department out of existence.

But the Republican campaign message was summed up by Koch at the end of the session.

Republicans should be proud of their work this session, she said.

“We’re going to run on this budget. We’re going to talk about closing a $5 billion forecast deficit without raising taxes. That’s a big thing.”

And she said, Republicans will talk about reform.

Perhaps that was the biggest surprise of this long night that finally ended the 2011 recession.

For all the fundamental differences between Dayton and the Republican leadership, both were generally talking respectfully about each other.

Throughout the evening, Republicans talked about how “we are eager” to work with the governor on reforms in the next session.

“He seems to have genuine interest,” said Michel.

Mostly, Republican leaders seemed relieved that this was over and were doing their best to put a positive spin on the outcome that nobody was happy with.

All night, of course, Republicans had to face attacks from DFLers about the “irresponsible borrowing” that is the basis of this budget deal.

(An aside here: In the Senate, the members stayed in their seats on the floor and listened to the DFL speeches. In the House, many Republicans disappeared into the clubroom off the House floor rather than listen to DFLers vent.)

Republicans tried, sometimes without much passion, to put as good a spin on the deal as possible.

After Bakk’s speech and a number of other DFL speeches pointed out that all lawmakers (and governor) accomplished was creating a deficit for the next Legislature to deal with, Sen. Claire Robling, R-Jordan, defended the final product.

“I’ve heard the complaints this will leave us with a $4 billion deficit,” she said. “That’s $2 billion better than we were left with. … We can criticize this budget, but it’s better than what we’ve done in the past.”

So finally the old debates ended. And familiar ones began again.