We have seen state workers on the steps of the Capitol demanding that Republicans allow the rich to be taxed.

We have seen somber ministers at the Capitol saying the poor must be spared at the expense of the rich.

We have seen union leaders and DFLers and welfare advocates all gather at the Capitol in support of Gov. Mark Dayton.

And the shutdown goes on.

So when do the business leaders, in their pinstripe suits, pull up to the Capitol? And would they even be interested in telling Republican legislative leaders to give just a little to end the shutdown?

Business leaders apparently already have been meeting with both the governor and legislative leaders. (Unlike welfare groups and preachers, business leaders don’t have to stand on the front steps of the Capitol to get the attention of the pols.)

The business leaders even have been telling both sides they’ve had more than enough of this stalemate. But it sounds like they talk more gently to the Republicans than to DFLers.

“We’re hearing from our members that they want this resolved,” said Tom Hesse, a vice president with the Minnesota Chamber of Commerce.

“We’re also hearing that they want this resolved without tax increases,” Hesse adds.

Two-step conversations with GOP
Charlie Weaver, who heads the Minnesota Business Partnership, an organization of the state’s largest companies, says pretty much the same thing as Hesse. 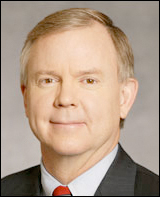 “We’re having a two-step conversation [with the Republican leadership],” Weaver said. “One, we’re saying thank you for the stands you’ve taken. From our view, the two most important issues are taxes and real education reform.”

Before more about that response, what’s the second part of the Partnership’s two-part conversation with Republicans?

“We think you need to get this done,” said Weaver of Part 2 of the conversations CEOs are delivering to political leaders.

Given the fact that it’s proving hard to get resolution without new revenue, it doesn’t sound like Minnesota corporate types are exactly bringing new and creative ideas to the table.

Weaver believes this mess will be resolved by Aug. 1 — and that business leaders will help mediate a conclusion that will allow both sides to declare at least a small win, if not a total victory.

Start with this. The chamber’s Hesse, whose organization tends to represent smaller organizations and businesses than the Business Partnership, either is holding his cards closer to his vest, or doesn’t feel the need to reach resolution that the Partnership feels.

Hesse said he and other Chamber officials are in constant contact with Main Street businesses across Minnesota. And for the most part, “most business are not being impacted [by the shutdown] or the impact is relatively minor,” Hesse said.

The CEOs of the state’s largest corporations say the shutdown is “impacting the Minnesota brand.”

Because the Minnesota shutdown so neatly compares with the national budget battle, Minnesota suddenly is getting a great deal of national—even international — attention, Weaver said.

Business Partnership members, though, say this negative attention is “embarrassing,” according to Weaver and is putting a huge hole in one of the state’s strengths in attracting the best and the brightest to come to Minnesota.

That strength always has been that Minnesota is “the state that works.” Weaver went on to extol the state’s virtues: It’s a great place to live, he said, because of its great parks, arts venues and schools.

But don’t those things exist because, in the past, people weren’t so angry about paying taxes?

“In some cases that’s true,” said Weaver of Minnesota’s progressive history. “But I think if you talk to people from places like the Guthrie and the Walker, they’d tell you our corporations have a history of generosity as well. Our companies have the highest level of United Way giving in the country.”

The point, he said, is that the state’s corporations have paid high taxes — and been generous.

He also made it clear that from what he’s hearing, Business Partnership members “don’t want Republicans” to fold on their no-new-taxes position.

A way out?
But, he said, he believes, there’s a way out of this for both sides.

Weaver, a former Republican legislator and onetime chief of staff for Gov. Tim Pawlenty, believes that even though a $34 billion budget “should be enough,” he believes there are ways to boost the budget to around $35 billion without a tax increase. He didn’t indicate, though, where that $1 billion would come from.

That higher budget would give both sides their precious political victory, according to Weaver.

Dayton would have an extra $1 billion to fund the programs most near and dear to his heart.

Republicans would have held the line on taxes and created education reform. Those two areas, Weaver repeatedly said, matter most to CEOs.

This part on education seems contradictory. Weaver says that he is being told by Minnesota executives that the state is losing its ability to brag about its unique, educated workforce.

“We’re worried about our workforce competing in the global economy,” he said.

But wouldn’t that indicate that the state needs to do more to support public education?

“As a country, we spend more than any other country in the world on education — and the results are bad,” Weaver said.

Then, he touted the “reforms” he says Republicans have pushed in Minnesota this year: more assessment of teachers, reducing the power of seniority in the education system; grading the effectiveness of principals and offering scholarshipsto kids who want out of schools that are judge to be “failing.”

“Some of the leading reforms in the nation,” he said.

Weaver said he had a meeting with House Speaker Kurt Zellers on Monday. Among other things, he apparently was stressing the victories Republicans can claim while coming up with some revenue for Dayton.

When labor and business talk …
He also had a recent lunch with Eliot Seide, executive director of Council 5 of AFSCME, the first union to come out in support of Dayton. (Seide and his union have had several rallies at the Capitol, supporting Dayton’s “tax the rich” concept.)

A Weaver-Seide conversation goes like this, according to Weaver:

Seide: “Charlie, you know the rich can pay more taxes.”

Weaver: “Anyone can pay more. That’s not what this is about. It really isn’t about taxes. It’s about spending. The spending levels are unsustainable.”

At that point, Seide and Weaver apparently try to change the subject and figure out how the mess can be resolved.

Although Weaver, the lifelong Republican, insists that it’s the DFL that “wanted” the shutdown, he agrees that now both sides have plenty of shutdown material for future political brochures.

That means both sides can resolve the issues.

There are, according to Weaver, reasons for optimism:

1. There is “a rising tide” of people being affected by the shutdown. Weaver noted that as of Aug. 1, a number of taverns and restaurants will go out of business because they are not able to renew their licenses to buy liquor. Other business, such as car dealers, are running into more difficulties because of the shutdown. Legislators of both parties will be hearing from more and more constituents as the “tide rises.”

2. Dayton, Senate Majority Leader Amy Koch and Zellers have remained respectful of one another.

“There are pathways to get this done,” Weaver said.

Most of those paths on Weaver’s map appear to veer to the right of center.