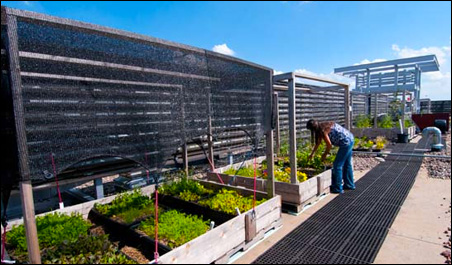 Compared to the meadow and prairie wildflower plot nearby, the organic vegetable garden is neatly organized, and bees make their way through all of it, buzzing from a woodland garden to unmowed grass. Although it sounds like a rural scene, there’s a catch: This setup is a few stories off the ground, on the roof of Fire Stations 1 and 10 in St. Paul.

The green roof is now in its second year, located at West 7th and Randolph, and the 8,000-square-foot space keeps the firehouses cool in the summer and warm in the winter, according to Steve Zaccard, the city’s fire marshal and public information officer. A small vegetable garden is tended by the firefighters, who use the produce for their meals.

“Every day, we have people who stop by and want to take a tour of it, so we bring them up there,” he says. “It’s a community asset.”

The fire stations aren’t the only buildings sporting greenery these days. Putting plants on vast, often unused roof spaces has always been popular, but it’s usually taken the form of container gardening, done on a rather small scale.

Now, with the boom in community garden efforts and the burgeoning interest in local food and plants, rooftops are increasingly being seen as more than just spaces for placing a few diminutive trees or a water barrel full of flowers. They’re bona fide potential farm and garden plots.

Backyard Nostalgia
Way-above-ground gardens have been gaining in popularity, notes Derrick Gaugliardi, a garden designer at Tangletown Gardens. Clients have been asking for more native grasses and flowers, making their rooftop spaces into backyard-type landscaped areas that are perfect for lounging.

“For some people, they’ve moved out of larger homes, and they miss their gardens,” says Gaugliardi. “This way, they can live in the city and still have nature close to them.”

From Roof to Table
In terms of rooftop farming, one of the most prominent ventures sits atop The Cornerstone Group, a real estate services firm in Richfield. Designed in partnership with local firm Ecological Gardens, the farm was planted in 2005, with the aim of demonstrating that rooftop farming could be done in existing built environments.

The produce grown at the farm goes to Lucia’s, a restaurant long known for its focus on local and sustainable foods. The close proximity of farm to restaurant means that a diner might get salad that was harvested only a half an hour before ordering.

Elaine Swenson, Cornerstone’s Director of Asset Management, says the farm is one of her favorite topics of conversation. “We’re really hoping that other people will watch and follow our lead,” she notes. “We’re in a small, urban type of area and we don’t have a field, yet we can grow organic fruits and vegetables. How wonderful is that?”

A Special Microclimate
Rooftop farms differ in their operation than on-the-ground plots, which can occasionally present a challenge, Swenson says. For example, beneficial insects need to be “lured” up to the space since they don’t tend to congregate that high up. Also, the area is windier and warmer than ground-level gardens, so irrigation is always an issue.

That climate difference can also be a benefit, however. Paula Westmoreland of the Minneapolis garden-design firm Ecological Gardens notes that warm-weather plants like tomatoes and peppers will actually mature faster on a rooftop, so they can get to the plate weeks ahead of traditionally grown vegetables and fruits. It’s also possible to plant some vegetables, like sweet potatoes, that require a slightly warmer climate than the Minnesota landscape affords them. 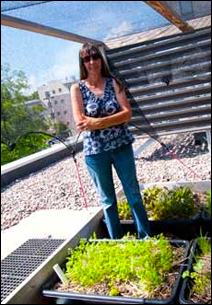 “The rooftop is really its own little microclimate,” she says. “It takes research and investigation to stay on top of managing nutrients and irrigating properly. Even doing something like building a greenhouse can be tricky, because you can’t attach it to anything. But it’s also exciting, to turn that space into something living and useful.”

Rooftop Challenges
Although it would seem that opportunities might abound for far more rooftop farm efforts, there are a number of challenges that can thwart would-be farmers.

Most significantly, turning a garden space into a working farm requires compliance with regulations that call for wheelchair access. That means any garden space that employs people or sells its products would have to install an elevator to the roof, to fall under the guidelines of the Americans with Disabilities Act.

That’s the difficulty that kept Dayna Burtness, a Minnetonka farmer, from fulfilling her dream to launch Sky High Harvest, an organic rooftop farm business. “If you want to grow vegetables on a rooftop for fun, you can do that,” she says. “But if you want an actual farm up there, the cost of compliance with the ADA would make it impossible. It’s a shame, actually.”

Parking-Ramp Farms?
One solution to the issue may be using parking ramps as garden spaces, notes Westmoreland. Ramps already have elevators in place, and are structurally sound enough to support the weight of so much soil and equipment. Imagine looking out from a downtown office window on all the parking ramps below, watching the tomatoes getting harvested, or the prairie grasses blow gently above the traffic.

“Wouldn’t it be great, to turn a dead space into something living?” Westmoreland says.  It’s a lovely image, but one that will likely take years, if not decades, to come to fruition. Parking ramp owners aren’t exactly clamoring to become farm owners right now.

Despite the challenges, though, there may be more initiatives toward green roofs in the future. A soon-to-open restaurant in Minneapolis, The Bachelor Farmer, has tapped Ecological Gardens to plant a rooftop garden for its chefs, and successful projects like the firehouse in St. Paul are likely to inspire other businesses and government agencies to give it a try. Zaccard notes that a new firehouse going up in Roseville may sport a roof garden as part of its construction.

“It needs to catch on a bit, but it really is a great idea,” he says. “It has the ability to bring the community together, and to put some more nature into the city, and that’s never a bad thing.”

Elizabeth Millard is innovation and jobs editor of The Line. This article is reprinted in partnership with The Line, an online chronicle of Twin Cities creativity in entrepreneurship, culture, retail, placemaking, the arts, and other elements of the new creative economy.

Greening up: Rooftop farms and gardens flourish in the cities