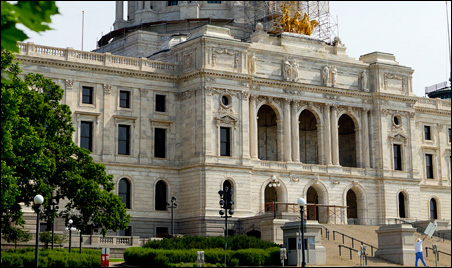 Minnesota government officials, already burned this month by the loss of a blue-ribbon credit rating from one of the nation’s three principal bond rating agencies, now face the challenge of retaining their only remaining top rating.

It could be an uphill effort, because of both key features embedded in the budget accord that ended the shutdown of the state’s government and the radically different fiscal stances of the two major political parties.

Fitch Ratings (PDF), which had given Minnesota its top rating since 1993, had seen enough by the end of the first week of the shutdown. Citing an “increasingly contentious budgeting environment in the state in recent years,” Fitch cut the state’s rating a notch (PDF), from AAA to AA-plus.

Moody’s Investor’s Service cut the state’s credit status a notch, from a top-rated AAA to AA-1 in 2003.

In itself, the Fitch move to cut the state’s bond rating won’t significantly boost interest rates. But that cut and a related Fitch reduction could boost interest rates facing schools and other local governments.
Also, the losses of top ratings could carry a cost, virtually impossible to measure, by dragging down the state’s reputation. And generally, the inability of the Legislature and the governor to agree on a sound fiscal plan going forward raises uncertainties for businesses, governments, schools and nonprofits across the state.

Robin Prunty, S&P’s principal analyst for Minnesota, said in an interview Friday that the firm’s analysts have yet to evaluate the fiscal accord reached by Gov. Dayton and Republican legislative leaders to settle the state government shutdown.

She would not comment on the possibility that the settlement and other concerns will lead S&P to cut its rating.

On July 1, the day the shutdown began, S&P released a statement (PDF) saying Minnesota’s budget impasse would have “no immediate impact” on Minnesota’s Triple-A status. But S&P added that if “progress toward structural budget balance is threatened, there could be credit implications.”

Critics say the accord smacks of “smoke and mirrors” accounting and “kicks the can down the road” in terms of responsible budgeting because it relies heavily on non-recurring or “one-shot” revenue to restore a balanced budget. The settlement pushes off hard decisions on taxes and spending by delaying yet more payments to the schools and issuing “tobacco bonds” secured with future revenues expected from the state’s 1998 settlement with tobacco companies.

A number of other states, squeezed for revenue in recent years, have turned to tobacco bonds by tapping into revenue expected from their own settlements. Two years ago, Gov. Pawlenty urged that Minnesota do likewise as part of a package designed to curb the 2010-11 budget shortfall. The House flatly rejected the idea on a 130-to-2 vote.

At least 19 states have gone with tobacco bonds. By far the biggest user is California, which has been assigned the lowest credit rating of all of the states by each of the three ratings agencies. The next three largest issuers of such bonds — New York, Ohio and Illinois — also have not been faring particularly well in the ratings game recently.

Turning to tobacco bonds is abhorrent to Jay Kiedrowski, Gov. Rudy Perpich’s finance commissioner from 1983 to 1987. Kiedrowski, now a fellow at the University of Minnesota’s Humphrey School of Public Affairs, likens the practice to a family buying groceries with a credit card and then simply letting the debt mount without paying it off anytime soon.

Shutdown delays bond issue
Uncertainties raised by the shutdown have delayed a major state bond issue. Traditionally, state finance officials travel to New York City in mid-July to meet with analysts at the rating agencies. At those meetings, they present and explain the latest data on the state’s economic and fiscal circumstances and respond to questions from the agencies’ analysts. A few weeks later, the agencies assign a rating to the bonds, and the state sells them.

Kristin Hanson, debt manager for the state’s Management and Budget unit, said the dispute between the governor and the Legislature led the state to delay the bond issue. Now, she said, state officials want to complete an offering circular for this summer’s bond sale by early August, visit the agencies in mid-August and then sell the bonds.

“We would hope to go to the market by the end of August,” she said.

Hanson said the state expects to float about $600 million in general obligation bonds in that sale.

Peter Sausen, who was the state’s debt manager for 25 years before retiring in 2007, said the agencies’ analysts look for the fiscal characteristics of a top-rated state.

Such attributes include a reserve or “rainy day” fund; avoiding the use of non-recurring revenue sources, such as the tobacco bonds or the delayed payments to the schools; and if the budget is out of whack, a plan to balance it structurally.

Minnesota’s rainy day fund was wiped out by the recession, and there has been little talk of rebuilding it. State law, however, requires that it be restored as the economy rebounds and generates increased tax revenue.

In resolving budget issues, the rating agencies like to see tax increases on the table since taxes pay the debt service on the bonds, Sausen added in an email. “The willingness to raise taxes is a positive for the rating agencies.”

Republican legislative leaders staunchly opposed tax increases, leading Dayton to drop his proposal to boost taxes on the wealthy. No tax increases are in the accord announced last Thursday to end the shutdown.

The accord also appears to lack a plan to bring the budget back into balance structurally, Sausen notes. “There’s such a division between Republicans and Democrats,” he says. “They’re not working together.”

How much do the ratings matter? Sausen says that when he retired, a $500 million issue of 20-year bonds would cost the issuer about $125,000 more in interest over the life of the issue if it had an AAA rating cut by a notch. “It’s not earth-shattering,” he said.

However, when a state rating is cut, it can have a domino effect, reducing the ratings of cities, counties and school districts across the state because state finances are intertwined with those of the local governments.

Rating cut hits schools
Fitch also cut its rating for Minnesota’s school district credit enhancement program a notch this month, from AA-plus to AA. Peggy Ingison, chief financial officer for the Minneapolis Public Schools and a state finance commissioner during the Pawlenty adminstration, says that move will have a negative impact on all of the state’s school districts because they all use that program to lower interest rates.

The lower Fitch ratings come at a time when the additional delay in state payments to school districts means many of them will need to do more short-term borrowing, Ingison said in an email.

“It’s difficult to quantify the impact,” she said, but the increase in delayed payments by the state to the districts likely will force the Minneapolis district to turn to short-term loans. The district has not done any short-term borrowing for the past five years.

“The longer-term unsustainability of the state budget situation is what is most difficult to calculate for the future,” she said.

Finally, there the “reputational effect” — an intangible that defies measurement — of the weakened credit status. Sausen offers one example: States that have top credit ratings can use them to as economic development tools.

Falling from ranks of elite
Today, eight states — Delaware, Georgia, Maryland, Missouri, North Carolina, Utah, Virginia and Iowa — have top ratings from each of the three agencies. Yes, Iowa, the state Minnesotans so love to look down on.

Eight more, including Minnesota, are rated as Triple-A credits by at least one of the three agencies.

In the 1990s, Minnesota became one of a handful of states to enjoy the coveted AAA status from each of the three agencies. Fitch upgraded the state to the top rating in 1993. Moody’s did so in 1996 and S&P about a year later.

Even if S&P takes away its top credit rating for Minnesota, the state’s rating will still remain above those of most states. The agency rates California, which is at the bottom of its credit rankings, as an A- credit — five notches below AAA status.

Still, when a state loses a AAA rating, earning it back can be a long process.

Moody’s took away Minnesota’s AAA status in 1982. It took the state 14 years to get it back.

Dave Beal writes about business and the economy. He can be reached at dandcbeal (at) msn (dot) com.