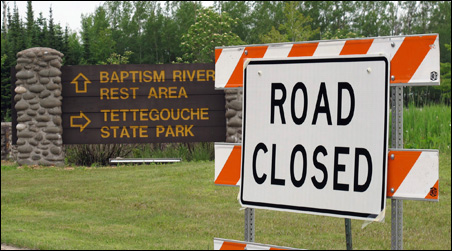 REUTERS/Eric Miller
Forty-two percent of poll respondents blame Republicans in the Legislature for the shutdown.

By a whopping 2-1 margin, Minnesotans blame the Republicans who control both houses of the Legislature for the recent government shutdown more than they blame Gov. Mark Dayton, according to a poll taken this week for MinnPost.

Predictably, most Republicans blamed Dayton more (by 56 to 10 percent, with the rest saying both sides were to blame or holding no opinion). DFLers blamed the Republicans by an even more overwhelming majority (68 percent to just 2 percent of DFLers who blamed DFLer Dayton).

But the key swing group of self-identified independents was also much more likely to blame Republicans than to blame Dayton. Among independents, 46 percent “blamed” the Republicans, 18 percent blamed Dayton and 25 percent both.

Based on other questions in the poll, it was difficult to say whether the fallout from the shutdown will give DFLers a significant advantage heading into the 2012 elections, as Republicans seek to retain their majorities. Projecting current attitudes onto an election 16 months in the future would be folly.

Also, this poll, conducted for MinnPost by Daves & Associates Research, was designed to take the pulse of the state in the aftermath of the shutdown, not to predict the next election. No likely voter screen was used and sample surely includes non-voters.

But if Republicans stick to their ironclad no-new-taxes stance, they may find themselves out of sync with most Minnesotans other than the hard-core Republican base. 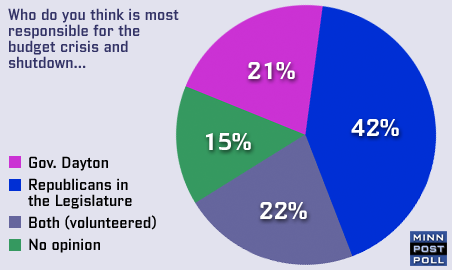 Unless there is an economic miracle, and right quick, Minnesota will head into the next budget session needing to decide again whether to make big, painful spending cuts, impose a significant tax hike or some combination thereof to balance the 2013-14 budget. The MinnPost poll asked which of those approaches respondents would favor.

Only 23 percent of respondents said that they favor a cuts-only approach. A strong majority — 66 percent — say a combination of spending cuts and tax increases is the way to go. Another 5 percent would prefer raising taxes enough that no spending cuts would be necessary.

Inside MinnPost: MinnPost’s first poll and how you can help

Even among Republicans in the sample, 50 percent preferred a combination of spending cuts and tax increases, compared with 42 percent of Republicans who agreed with the Republican no-new-taxes position.

And the key swing group — Minnesotans who do not identify strongly with either major party — were closer to the DFL views. Among independents, it was 22 percent for no new taxes, 2 percent for no spending cuts and 72 percent for a combination of cuts and tax increases. 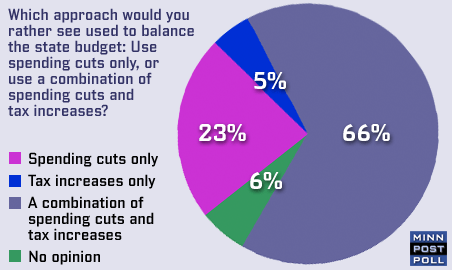 The overall sample, by the way, consisted of 28 percent self-identified Democrats, 21 percent Republicans, with by far the largest portion (a combined 51 percent) calling themselves independents, identifying with a smaller party, or expressing no description of their partisan orientation. Somewhat similarly, the full sample was composed of 32 percent who considered themselves conservatives, just 18 percent who self-identified as liberals, with the biggest group (50 percent) calling themselves moderates or offering no opinion of their ideology.

Projecting to 2012?
As far as the business above on the difficulty of inferring partisan advantage from these results, here’s what I meant: The general attitude toward the shutdown, whose fault it was and how the budget impasse should have been resolved seems to favor the DFL. If those views were to hold up and the 2012 turned into a referendum on who was to blame for the shutdown or who has the best approach to avoiding another shutdown, it would seem to be promising for DFLers hopes of capturing control of one or both houses of the Legislature. (All members of both houses will be up for election in 2012, and Dayton will not.)

More likely to vote for the Repubs: 17 percent

More likely to vote for the Dems: 30 percent. 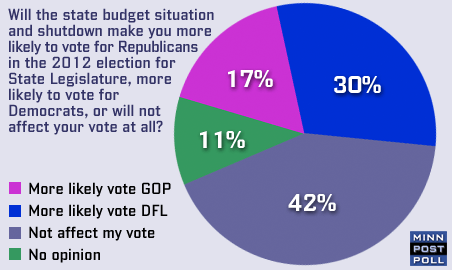 I guess that also looks promising for the Dems. But many of the respondents who said they were “more likely” to vote for the Dems voted for them in 2010. (Same for the Repubs.)

To explore more deeply whether feelings about the shutdown would actually cause Minnesotans who recently voted for one party to switch to the other party, pollster Rob Daves cross-tabulated the responses against respondents’ recollection of whom they had voted for in 2010. Among those who recalled voting for a Republican in 2010, only 6 percent said that the feelings about the shutdown made them more likely to vote for a DFLer in 2010. And of those who voted for a Democrat, only 4 percent said they were more likely to vote for a Republican. There are reasons to view these number cautiously, since the sample included many non-voters and probably some who didn’t reliably recall their previous vote — it’s been nearly a year. But at face value, the cross-tabulation suggests that a relatively small number of Minnesotans expect to switch from red to blue or from blue to red in 2012.

Take our poll on the government shutdown

Do you have opinions on the recent state government shutdown? If so, MinnPost would like to measure them.

On the other hand, among those who described themselves as independents, 13 percent said the shutdown made them more likely to vote Republican in 2012, while 29 percent said it made them more likely to vote Democratic. (Half of independents said the shutdown would have no effect on their likely 2012 vote.) If looking at the views of independents is the best method of inferring future political momentum from current feelings about the shutdown, that analysis looks more promising for DFL legislative candidates.

“They have to think about this fact,” said Jacobs.”The principles that they ran on in 2010 — that they would advocate for cuts only and would refuse to go along with any tax increase — may still be the principles that appeal to the most enthusiastic base of support they have. But that position seems to be pretty unpopular not only with two-thirds of Minnesotans, but with half of their own party, all of whom prefer a mix of significant spending cuts and at least some tax increases.” 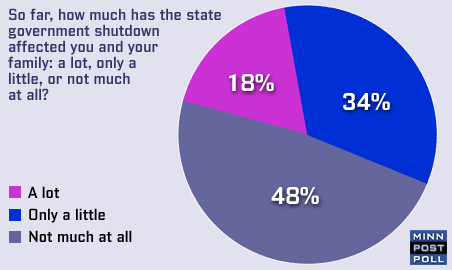 House Speaker Kurt Zellers this morning explained the poll results about the Legislature this way: “It’s a little like what you see on the national level. Everybody hates Congress but loves their congressman. It’s just easier to blame that amoeba-mass than a single person. I think if you go to the individual members in their districts, the results would be different. The individual members would be more popular than the mass.”

He says the governor, by contrast, has “the power of the bully pulpit. Every time he speaks, he blames us. He talks about ‘the Republican plan,’ even though he signed it.”

The House speaker also sees the public’s view seeking a combination of spending cuts and tax increases: “I understand why people who do polls ask the question. But it’s so easy to say, ‘Sure, increase taxes and make cuts.’ But the first thing I learned when I was on the tax committee was that old mantra: ‘Don’t tax you, don’t tax me, tax the guy behind the tree.’ A lot of people don’t even know a millionaire, so why not tax them? I used to believe that, but then you keep talking to people — people who worked for small businesses that have been closed, people who run small businesses. They can’t take more taxes.”

And Zellers notes: “When you get specific about other taxes, you get a different answer. Talk to people about sales taxes. “Ask somebody, ‘Should we expand the sales tax to clothes?’ They’ll say, ‘Oh no, no, no.’ So you say, ‘Maybe we should expand the tax to include services, like your accountant or the mechanic. ‘Oh, God no, not that.’ ”

In terms of the lasting impact of the shutdown, Zellers says: “I think attitudes change pretty quickly. People want to get back to summer. Nobody likes to see a car crash on the highway for very long.”

Gov. Mark Dayton, reacting this morning to the poll’s “blame” findings, said: “It’s a positive sign to me that people overwhelmingly, 3 to 1, are supporting my position and, 2 to 1, saying it was the Legislature responsible for the shutdown. I knew going in that this would be damaging both to the legislative leaders and to me. But the $1.4 [billion] in revenue for essential services [that he won during the shutdown] are needed, and they’re worth any of the [political] damage.”

In terms of the long-term impact of the shutdown, the governor said, “People are changing their minds as events unfold. It will take awhile not to look at the shutdown with great dismay.”

He expressed surprise at the high number (48 percent) who saw little impact from the shutdown. “I would guess that the 18 percent [affected a lot] are public employees, or private-sector employees who were laid off because of the shutdown,” Dayton said.

The MinnPost-sponsored survey of 598 Minnesota adults was taken July 24-26 by Daves & Associates Research. The margin of sampling error was plus or minus 4.8 percentage points.

Doug Grow contributed to this report.

FRIDAY: How is Gov. Mark Dayton handling his job as governor?

Related: Take our poll on the government shutdown
Inside MinnPost: MinnPost’s first poll and how you can help

How the poll was conducted

The poll surveyed 589 randomly-selected English-speaking Minnesota adults statewide July 24-26 who live in landline and cell-phone households. For a sample of 598 respondents using these methods, one can be 95 percent confident that results in the poll will vary by no more than 4.8 percentage points, plus or minus, from a survey in which every adult in the state were surveyed. This does not include other, non-random sources of error, such as non-response effect, construct effect such as question wording or order, and the effects of news events on public opinion. The data were weighted using federal statistics on type of telephone service, geographic distribution, gender, race, ethnicity and age to ensure that the state’s adult population was accurately represented and to take into account many of the sources of error above.

Related: Take our poll on the government shutdown
Inside MinnPost: MinnPost’s first poll and how you can help