Gov. Mark Dayton has come out of the state government shutdown with Minnesotans evenly split on his job performance.

Forty percent approve of his work, 40 percent disapprove and 20 percent have no opinion, according to a poll done for MinnPost.com by Daves & Associates Research.

Depending on how you look at things, the results are a little surprising — or in keeping with Dayton’s political career.

What may seem surprising about Dayton’s so-so approval ratings is that those same 598 respondents blame Republican legislators, not Dayton, for the shutdown by a 2-to-1 margin. Another 22 percent, though, blame both the governor and the Legislature.

Majority back his positions but not him
But that support for his stated political positions doesn’t carry over to his personal approval ratings according to the poll, which was conducted July 24-26, less than a week after the shutdown ended.

Dayton says he is not particularly surprised by the results of the poll. 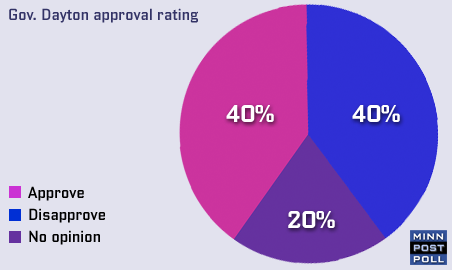 “I would have expected a drop in approval,” says Dayton, “and I certainly care about the public opinion. It affects your ability to lead.”

Dayton says the shutdown clearly led to a fall in his approval ratings. In May, he notes, a Star Tribune Minnesota poll showed that he had a 54 percent approval rating.

“That’s a significant drop,” he says. “But I expected that. I still believe that those services we saved [with the budget resolution] are vital.”

The poll’s overall sample consisted of 28 percent self-identified Democrats, 21 percent Republicans, with by far the largest portion (a combined 51 percent) calling themselves independents, identifying with a smaller party, or expressing no description of their partisan orientation.

The MinnPost poll shows that even DFLers have mixed feelings about the governor.

Inside MinnPost: MinnPost’s first poll and how you can help

The poll shows that 64 percent of DFLers surveyed approve of the governor’s leadership while 18 percent of those who describe themselves as DFLers disapprove.

That Dayton has less than universal support among members of his own party is no surprise to him. The governor notes that some of his strongest supporters were the most upset by his decision to drop his demands for a fourth income-tax tier for Minnesota’s wealthiest people.

Overall among those polled, more strongly disapprove of his leadership (21 percent) than strongly approve (14 percent).

Independents more favorable toward Dayton
Dayton is encouraged by the relatively strong support he receives from those who identify themselves as political independents. Among independents, 45 percent approve of Dayton’s leadership, 36 percent disapprove and 18 percent have no opinion.

The governor says he has no guess as to why his leadership got higher approval numbers in the seven-county metro area (44 percent approval, 39 per cent disapproval) than in areas outside the metro (35 per cent approval vs. 42 percent). This pattern, however, generally aligns with traditional voting patterns showing stronger DFL support in the metro area.

As much as he’s concerned by the drop in his approval ratings from the mid-May poll, Dayton says he’s comfortable with his decision to end the shutdown by backing off from a higher tax on the wealthiest and accepting the GOP-advanced plan of using a K-12 education funding shift and the sale of tobacco bonds to create additional revenue.

“This is a very difficult and controversial time,” Dayton says. “I knew it would be damaging to everyone but it was essential to provide those essential services.”

What probably shouldn’t be surprising is Dayton’s 40-40 approval split because close calls have become a way of life for the governor.

Take our poll on the government shutdown

Do you have opinions on the recent state government shutdown? If so, MinnPost would like to measure them.

Recall, in the DFL primary last August, he defeated Margaret Anderson Kelliher by 1 percentage point. In November, he defeated GOP gubernatorial candidate Tom Emmer by about a half-point.

His U.S. Senate career — he won election in 2000, defeating Rod Grams by 49-43 margin — was marked by large approval swings. According to Survey USA polling, Dayton swung from a high of 58 percent approval in early January of 2004 to a low of 39 percent in polls conducted in his last year in the Senate.

There is the obvious, according to Larry Jacobs, political scientist at the Humphrey Institute.

“The governor has been knocked around,” Jacobs said.

“It seems the Republicans are the ones who have walked away with a black eye. Dayton is taking a beating in his approval rating for being seen as abdicating, but he may have engaged in a kind of hidden-hand politics that could actually turn out to be politically brillant. He risked looking weak to some, especially to some DFLers who wish he had fought longer.

“But by abdicating and emphasizing that he was accepting the Republican plan, he also shifted blame to the Republicans for the final budget solution, and the rest of the poll shows the solution is unpopular. Dayton may have defined the Republicans more clearly than they will be able to define themselves.”

Eric Black contributed to this story.

How the poll was conducted

The poll surveyed 589 randomly-selected English-speaking Minnesota adults statewide July 24-26 who live in landline and cell-phone households. For a sample of 598 respondents using these methods, one can be 95 percent confident that results in the poll will vary by no more than 4.8 percentage points, plus or minus, from a survey in which every adult in the state were surveyed. This does not include other, non-random sources of error, such as non-response effect, construct effect such as question wording or order, and the effects of news events on public opinion. The data were weighted using federal statistics on type of telephone service, geographic distribution, gender, race, ethnicity and age to ensure that the state’s adult population was accurately represented and to take into account many of the sources of error above.