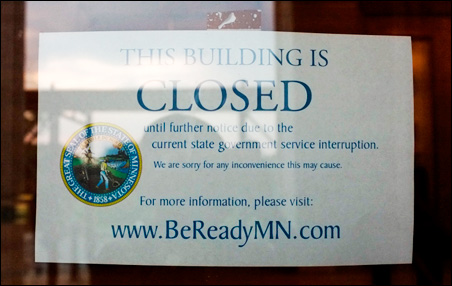 MinnPost photo by Terry Gydesen
Layoffs of state workers drain about $23 million a week in purchasing power from the state’s economy.

In a familiar ad for a credit card, costs of two items are quoted and then the cost of a third more intangible benefit from those purchases is listed as “priceless.” If a similar analysis were done for the current shutdown of Minnesota state government, the cost of the shutdown would be listed as “incalculable.”

But just because the shutdown costs to a complex economy like Minnesota’s will be too difficult to measure with precision, doesn’t mean the losses won’t be real and significant.

Here’s where a lot of the damage will occur:

State, families, business
First, there are the most obvious costs: the losses sustained by the state, families, non-profits and businesses during the shutdown. Layoffs of state workers drain about $23 million a week in purchasing power from the state’s economy. This will be felt by businesses as workers’ families adjust their spending patterns and those decisions ripple through the economy as sales decline. As the shutdown grinds on, the effect on businesses will grow as families initially spend down their savings and then make deeper cuts in spending on both essential and discretionary items.

Further, there are indirect costs to families and businesses — such as increased absenteeism and decreased worker productivity – because state childcare assistance has been suspended.  A variety of state services, such as background checks for employees and license renewals for health-care workers, are not available. A loss of these services results in bottlenecks and other problems for businesses and non-profits.

The full list will be long and varied. For example, early-stage businesses are reportedly being hurt because registration in the state’s highly successful angel-investor program is unavailable to would-be investors during the shutdown. This all adds up.

Ongoing costs
Harder to estimate are the ongoing economic costs that will continue after the shutdown ends. These will include increased interest costs on Minnesota state debt in coming years if the recent downgrade of the state’s credit remains in place, as is likely. Even though the shutdown apparently triggered the downgrade by Fitch’s, the accompanying statement from the rating agency made it clear that it was reacting to Minnesota’s pattern of using accounting gimmicks and one-time solutions to balance its budget over many years. When the state will regain its higher depends on how this current crisis is settled and on future state financial decisions.

Many school districts will face increased interest costs as they borrow to plug holes in their own annual budgets caused by delays in promised state dollars. Even though the administration and legislators promised in 2009 that the shift of $1.4 billion in the previous biennium’s budget would be paid back starting in the current fiscal year (FY2012), it is clear that money will not be paid back until FY2014 at the earliest. Moreover, some of the budget solutions being discussed go a step further and would delay additional dollars during the next two years.

It will be harder to estimate the economic losses from additional ongoing changes that businesses and non-profits will make, either to adjust to the consequences of the shutdown or to modify their operations to insulate themselves against future government disruptions. Moreover, many agencies that get funding from the state know they will be facing cuts, but they don’t know how large those cuts will be until a final budget deal is approved.

Quality of life
But an estimate of the shutdown’s economic losses isn’t complete without considering another category of costs, even if a dollar value cannot be readily calculated.

In the hyper-focus on dollar amounts in budget deliberations, it is easy to lose sight of the fact that government exists to improve the quality of life for its citizens. The quality of Minnesotans’ lives has been diminished because of the shutdown.

Some of the affects may seem small or transitory, such as modified or canceled vacation trips to state parks. But others are more serious, such as a senior citizen’s move to a nursing home because the senior could not continue to live at home when home-care assistants could not get licenses during the shutdown or their backgrounds could not be checked out.

Looking ahead
When the shutdown finally ends, will there be any benefits? It’s possible — if policymakers make changes in their approaches and in the budget process itself as a result of the experience.

For example, policymakers are now starting to realize that tax loopholes and preferential treatment of certain activities are really “tax expenditures,” a term that economists were using when I was in graduate school many decades ago.

But if these changes don’t occur, we will face additional discomfort in future years. This same governor and many of the same legislators will be facing another large deficit in two years, a deficit that will be made even larger to the extent that more one-time funds are used to plug the current budget gap.

Finally, an additional cost or danger occurs to me. It is the danger that some national policymakers will observe events in Minnesota and decide that the shutdown is uncomfortable but not a disaster, and draw the false conclusion that postponing raising of the national debt ceiling is a risk worth taking. If that happens, the cost of Minnesota’s shutdown would be incalculable – and catastrophic.

Paul Anton is chief economist at Anton Economics in Minneapolis.

Shutdown’s damage to the Minnesota economy will be real, significant — and incalculable