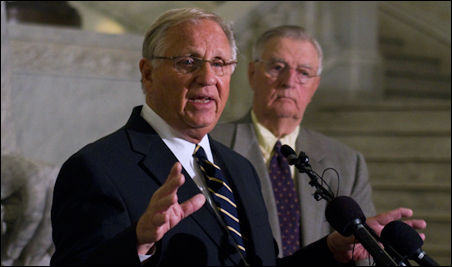 A “third way” committee was unveiled this morning, hours before Gov. Mark Dayton and legislative leaders were scheduled to meet to resume budget talks.

The big question surrounding this committee, which was the brainchild of former Gov. Arne Carlson and former Vice President Walter Mondale, is whether it will have any power — or even influence — to end the dispute that has shut down the bulk of Minnesota state government.

Early returns are not particularly promising, because Republican leadership has not shown much enthusiasm for the six-member committee.

At a news conference at Minneapolis City Hall this morning, Carlson said that when he spoke with Senate Majority Leader Amy Koch on Monday about the committee, she said it would be better if Carlson and Mondale came to her office and “negotiated” about the formation and purpose of the committee.

Carlson, Mondale out of committee picture
Carlson declined that opportunity, saying that such a meeting could diminish the total independence of the committee. Mondale and former U.S. Sen. Dave Durenberger, who supports the committee idea, and Carlson will have NO role in whatever ideas that the committee comes up with.

“At the conclusion of this news conference, we ride into the sunset,” Carlson said.

Mondale nodded his head in agreement.

Republican legislative leaders have consistently backed away from the idea of bringing third parties into the failed negotiations.

When Dayton, for example, suggested that mediators be brought into the process to help get budget talks out of the deep rut they’ve been in since January, Republican legislative leaders said, “No.”

“We were elected to lead,” House Speaker Kurt Zellers said in an interview about the idea of using mediators.

Koch issued a statement reiterating the leadership’s traditional stand on outside help but not closing the door completely on the group’s effort:

“Governor Mark Dayton, Speaker of the House Kurt Zellers and I were elected to be the principal negotiators on how to best solve the state budget deficit. Republicans in the Legislature will continue to maintain our strong commitment against raising taxes and holding the line on runaway government spending. Recent polling showed that a vast majority of Minnesotans support our approach to holding spending levels the same or reduce spending even further.

“I am always open to hearing thoughts and suggestions from all Minnesotans. I would welcome any advice and insight that helps to solve this state budget deficit in a fiscally responsible way.”

However, earlier, Michael Brodkorb, communications director for Senate majority and the deputy chairman of the Republican Party, had issued tweets indicated that party bosses aren’t impressed by the formation of a committee.

“As in 02, Mondale is coming in to save his party as they face a major political crisis; this time due to Dayton shutdown,” Brodkorb tweeted at one point.

Dayton open to outside suggestions
It is clear that Dayton supports the notion of at least listening to any resolutions a nonpartisan committee of experts might recommend.

After all, his commissioner of Management and Budget, Jim Showalter, will be the “administrator” of the committee, which is made up of former legislators Steve Dille (Republican) and Wayne Simoneau (DFL), former budget commissioners John Gunyou (under Carlson) and Jay Kiedrowski (under Rudy Perpich) and business leaders James Campbell and Kris Johnson.

Showalter’s role is crucial, Carlson said, because the committee will need up-to-date state revenue data if it is to come up with workable ideas.

Even reporters at the news conference seemed skeptical about the committee’s work.

One reporter questioned whether the idea actually came directly from Dayton.

Carlson said that was NOT the case and, in fact, that he’d been blogging about the idea for weeks.

Another reporter wondered if a non-elected committee should be involved in the state budget process.

“Government is in deadlock, frozen,” said Mondale. “We have to find a process.”

Carlson noted that U.S. presidents frequently have turned to outside committees to attempt to find solutions to sticky political problems.

In fact, the only real power of this committee will be a good idea, which the public can embrace.

Neither Carlson nor Mondale was predicting that will happen.

But both sang the praises of the expertise those assembled.

The committee will work behind closed doors, the two old pols said. Members will not even necessarily announce when and where they will meet.

The public — via the media — will learn of what the committee is recommending, only after its work is done, Carlson said.

Mondale and Carlson both had only one fundamental request of this committee: speed.

Both former leaders fear that the Minnesota shutdown may become a symbol of the federal budget debate.

If national organizations start picking sides in the Minnesota shutdown, the dispute will only become more difficult to resolve, Mondale said.

“I love Minnesota,” Mondale said. “I think we are special — a little different and better than other states.”

If the shutdown continues, he said, “we will be overwhelmed by national pressures.”

Carlson bristled a bit at reporter questions that implied that the committee would tend to lean toward the governor’s position in the dispute.

He noted that Campbell, former CEO of Wells Fargo, and Johnson, a former vice president at Medtronic, are on the committee.

But he said it was important to have business representation on the committee, because job creation is vital to this process.

Carlson does have a longer-term hope for the committee. He hopes that after it comes up with some sort of a plan to resolve the immediate dispute, it can continue to work to put forward ideas that would change — and bring more stability — to the budgeting process in Minnesota.

As it’s currently set up — with the governor required to come forward with a budget so early in the session — there’s little time to create real reforms in how the state is taxed and how various agencies function.

But the immediate push is for the committee to come up with a compromise solution that may not please idealists on either side but would get government functioning again.