Note: This is a corrected version of an article that was originally published July 16, 2011.

With the thermometer inching up toward 100 degrees, tempers in South Minneapolis were rising, too, during the summer of 1931.

Night after night in mid-July, angry white protesters swarmed around 46th and Columbus, hurling rocks at the corner house and epithets at the people who lived there: Arthur Lee, his wife, Edith, and their small daughter. The crowd was incensed that the African-American family had moved into what had been considered an all-white neighborhood. “HOME STONED IN RACE ROW, the Minneapolis Tribune’s headline blared on July 15.

Now, 80 years later, some South Minneapolis residents are noting the anniversary of the Arthur Lee incident with a July 16 neighborhood ceremony. The event is intended to honor the Lees and their courage in confronting a racist mob during one of the ugliest incidents in the city’s history.

That incident occurred during a time of turmoil for Minneapolis. The Great Depression was well into its second year and its reach had extended into Minnesota’s largest city. Thousands of local families, with their breadwinners out of work, were coming to rely on meager relief payments doled out by the local Board of Public Welfare. Soon, City Hall would be the scene of angry confrontations between the building’s elected officials and throngs of unemployed workers protesting their inadequate payments and the prospect of a shutdown of the city’s entire relief effort.

New mayor made little headway
Earlier in 1931, Minneapolis voters, unhappy with the management of the local relief program, had ousted their incumbent Republican-leaning mayor, William Kunze, and replaced him with a Farmer-Laborite, William Anderson. The newly elected mayor tried to do what he could to diffuse the Lee incident, but Anderson, despite his good intentions, made little headway with the angry crowd on Columbus Avenue.

In June, Arthur Lee, a postal worker, had moved his wife and daughter into the small frame bungalow at 4600 Columbus, catching his white neighbors unaware. When they learned that he had breached an invisible color line farther north on Columbus, they began pressuring him to sell and move away. But Lee refused their offer to buy his home, at least initially, and his refusal was met with escalating anger and hostility on the part of many local residents.

On Saturday night, July 12, about 150 irate residents gathered in front of the Lee home for a spontaneous demonstration, frustrated by their lack of success in driving Lee and his family out of the neighborhood. When the police were called to the scene, the group disbursed. The next night, an even larger crowd gathered on Columbus Avenue, shouting out threats against the Lees.

By Tuesday, protests against the Lees were getting out of hand. Again the police were called. When they arrived they found that an angry mob had started to stone the Lee home. Almost immediately, they surrounded the house to protect the family.

Family kept home in darkness
“Despite the best efforts of the police, stones continued to be pelted at the house, usually by persons at the rear of the crowd, out of site of the patrolmen,” the Tribune reported. “The Lee family kept their home in complete darkness. Whenever they appeared, outside or on the porch, the crowd lifted up its voice in threats and denunciations.”

On Wednesday night, July 16, the crowd had swelled to more than 3,000 and the rocks kept coming.

“While city leaders tried desperately to effect a peaceful settlement of the affair, a rising tide of protest against occupancy of a home at 4600 Columbus by a Negro family resulted in another night of more violent demonstration outside the home,” the Tribune told its readers. “From his darkened home, Lee and his friends looked out from a barricaded fortress on a sullen, angry semi-circle of humanity. They heard themselves threatened continually from all directions. They heard stones strike against the house and windows crash.”

Earlier in the evening at a community meeting at Field School, one speaker after another urged patience, but those pleas fell on deaf ears. Increasingly frustrated by their inability to push the Lees out of the neighborhood, more than half the people at the meeting walked out in the middle of the session to join the protesters on Columbus Avenue.

By 10:30 that night an undermanned police contingent had retreated in the face of an unruly mob on the verge of a full scale riot.

Crowd denounces police
“Inch by inch the crowd moved closer to the Lee home, muttering threats and loud in their denunciation of the police,” the Tribune reported. Then a contingent of police motorcycles roared up to the scene, its drivers aiming toward the protesters but swerving just in time to miss them.

“This only served to rouse the crowd,’ the paper continued. “One motorcycle policemen was pulled from his machine and a squad of patrolmen went charging towards his rescue. Word was handed around that someone had struck a woman spectator. There was an ominous roar of disapproval.”

The following night, an even larger crowd of 4,000 had ringed the Lee home. Now, people from all parts of town had converged on 46th and Chicago, spilling out into the surrounding streets, ready to join in the disturbing spectacle. When a woman in the crowd slapped a policeman in the face, it looked as though that slap would spark an explosion, which could propel the mob on to storm the house. The police did succeed in preventing the explosion, but just barely, and the crowd eventually disbursed.

Lee, who had remained quiet during most of the disturbance, finally broke his silence and issued his own statement.

‘All I want is my home’
“Nobody asked me to move out when I was fighting for this country in France,” he declared. “I am not here to molest anybody. My family will not annoy anyone else. They can put up a high fence if they want to. All I want is my home, and I have a right to establish one and live in it.”

By Friday, it appeared that the crisis had passed. Lee’s attorney, H.E. Maag, told reporters that his client would consider moving if he was able “to deal with the residents of the community as one citizen dealing with one another.”

However, at this time the Lees sought advice from Lena Olive Smith, Minnesota’s first black female lawyer. Attorney and law professor Ann Juergens wrote extensively about the incident in the William Mitchell Law Review, Vol. 28:1. Here is an excerpt:

“Smith’s attitude toward the situation differed sharply from that of the Lees’ other advisors. She advised them not to move out in spite of the relief that a ‘settlement’ would bring. To Smith, the level of threatened violence only highlighted the importance of the principle at stake: that African-American people may live wherever European-American people live. Smith believed that ‘it would be unwise and unfair to this man to be forced to leave his home under the circumstances’ and that agreeing to move out ‘would have no effect other than to convince the mob that their action has been successful.’ “

They decided to stay and fired Maag; Smith began to represent them. Juergens writes that Smith met with the police chief and city officials the next day.

“She prodded the Chief to make the police more diligent and called on Governor Floyd B. Olson to threaten to call out the National Guard. Then she gave an emphatic statement to the press. Friends of Lee who had served with him in World War I organized a group of armed guards, and after almost a month the crowds no longer gathered at the Lees’ home.”

The Lees lived there for several more years.

While the scars caused by the Lee incident continued to fester in the black community, they did begin to heal as barriers to fair housing began to break down in the post-World War II era. 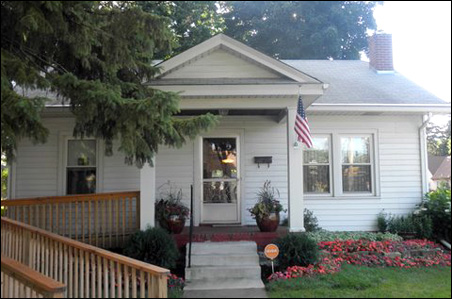 Today’s commemoration is intended to help continue the healing process, according to Joe Senkyr-Minjares, one of the organizers of the community event.

“We are recalling painful memories that some would just as soon forget,” Senkyr-Minjares said. “But the commemoration reminds us that we need to be vigilant, even today, in combating prejudice and racism that still can still lurk just before the surface. And this is not about pointing the finger of blame at ‘Whitey.’ There were courageous white people – World War 1 veterans and postal workers – who stood with the Lees. We may have forgotten their names, but we need to remember them, as well.”

The Lee commemoration will begin with a brief ceremony at the Field Community School at 4645 4th Avenue at 6:30 p.m. today, followed by a procession down 46th Street to the former Lee home at 4600 Columbus Ave., where a plaque recognizing the 1931 event will be unveiled.

Correction: This version corrects the outcome of the disturbances, now making clear that the Lees stayed on in the home.