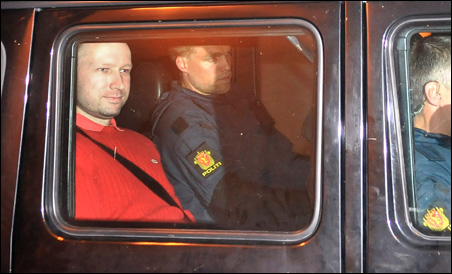 REUTERS/Jon-Are Berg-Jacobsen/Aftenposten via Scanpix
Anders Behring Breivik being transported in a police convoy from an Oslo courthouse on Monday.

In addition to mass murder, the perpetrators of genocide have one thing in common. It is obvious in the press coverage of Anders Breivik, the terrorist charged with the mass murders in Norway last week, just as it had been in the coverage last May of the last days of Osama Bin Laden or the arrest of Ratko Mladic and Goran Hadzic, the Serbians charged with war crimes. The political philosopher and author of “Eichmann on Trial: A Report on the Banality of Evil” (1963), Hannah Arendt, would recognize it instantly.

The extraordinary evil in our time has been the work of ordinary men. Covering for The New Yorker the trial of the Nazi SS commandant Adolph Eichmann, Arendt de-mystified the image of the Nazis. Eichmann in his time and his ilk in today’s generation are not larger-than-life dark knights of evil or the Darth Vaders of genocide. They are actually a rather pathetic bunch of Walter Mittys gone sour.

A 32-year-old bachelor who lived either alone on his farm or with his mother in Oslo, Anders Breivik is the flip-side of Garrison Keillor’s Norwegian bachelor farmer. Details of his life and personality, as they have appeared in The New York Times, show Breivik as the run of a very mediocre mill.

A former classmate described him as “unremarkable and easy to forget.” He made virtually no impression during his activism within Norway’s conservative Progress Party. “He’s one of the crowd, if you know what I mean,” recalled one party member, “you forget him.” Before his defense lawyer attempts to rest his case on an insanity plea he should know that psychiatric examinations of Adolph Eichmann diagnosed him as completely sane. Analysts in Norway have also underscored that Breivik is apparently “normal.”

You don’t have to read all 1,500 pages of Breivik’s manifesto “2083: A European Declaration of Independence” to understand that these are the hackneyed fantasies of a facile mind on the right. One image in particular struck me. He posted an altered photograph of himself in full combat gear and aiming an automatic weapon. The touched-up photograph reminded me of reports a generation ago that one of the culprits of the Watergate break-in, G. Gordon Liddy, had the custom of sending would-be girlfriends larger than life photographs of himself standing and armed. Breivik quotes John Stuart Mill out of context. Breivik’s cut-and-pastes plagiarize from the Unabomber, Ted Kaczynski’s manifesto.

Breivik’s manifesto
In Breivik’s manifesto, one statement came as no surprise. He says he turned to right-wing activism in 1999 when NATO with Norwegian participation bombed “our Serbian brothers.” He saw in Serbian war criminals brothers-in-arms in his crusade against Islam. Brothers in banality, Hannah Arendt would say.

One of them, Goran Hadzic, was arrested in Serbia last week and, in an appropriate coincidence, transferred to the International Criminal Tribunal for the former Yugoslavia(ICTY) at The Hague on July 22, the same day as Breivik’s mass murders in Norway.

From 1991 to 1993, Hadzic was the president of the Republic of Serbian Krajina, a self-proclaimed break-away enclave that Serbian nationalists had seized from the newly independent Croatia. Prior to the Yugoslav wars of the 1990s, Hadzic had been a warehouse worker. In speeches and television interviews, he had a gift for the humdrum. Although he spouted the platitudes of Serbian nationalism, Hadzic was in the war for the money. He concentrated on plunder, looting and black marketing, and was responsible for — in fact, boasted about — some of the most savage crimes of the Yugoslav wars.

One, in particular, stands out. In 1991, Hadzic oversaw the Serbian destruction and ethnic cleansing of the Croatian city of Vukovar. His forces attacked Vukovar Hospital, removed the patients, wounded, medical staff and others who had sought refuge there, and murdered 250 of them in a nearby field. The victims included children, the mentally retarded, and terminally ill.

This summer, Serbian authorities were able to arrest Hadzic when his aides tried to sell one of the last items from the loot he stole in the war — a Modigliani painting. It appears to be a fake. Hadzic knew how to steal, not how to judge art.

Hadzic was small change in the currency of genocide when compared to Ratko Mladic, the commanding general of the Bosnian Serb Army in the Bosnian War who was also arrested by Serbian authorities and turned over to The Hague in late May. The story of Mladic during the Yugoslav wars reads like a rap sheet of not just of the worst crimes of the Yugoslav conflict but of Europe since WWII.

He was responsible for the four-year Siege of Sarajevo and the massacre at Srebrenica. Lobbing artillery shells from the surrounding mountains to the defenseless city, Mladic’s bombardment of Sarajevo showed about as much courage or military heroism as Breivik showed when he gunned down the children on Utoeya Island.

Primped and posed
At the time, Mladic carefully primped and posed in military imagery for the media. Inviting reporters to his headquarters on Mount Igman just above Sarajevo, Mladic sometimes gave interviews while he lifted weights. Most of the time, dressed in crisply ironed military uniform, he postured for the reporters, frequently interrupting a conversation to check his field glasses and bark out a command.

On the scene of his most monstrous crime — Srebrenica — in the summer of 1995, Mladic anticipated the cruel arrogance of Breivik. According to the accounts of the children who survived the massacre at Utoeya Island, Breivik gloated in his power over the children, swaggering as a would-be god and stringing out a few moments of terror to the children’s ordeal before he shot them. Shortly before the start of what would be a massacre of at least 8,000 Bosnian men at Srebrenica, Mladic had rounded up and confined women and children outside the town in a warehouse complex. As they cried, pleaded for mercy and prayed, Mladic strutted about and declared, “I am your Allah now.”

The Mladic act had run out by the time of his arrest this May. Gone was the Serbian military cap. In its place, a baseball hat. The guns at his side went unfired. Impoverished, Gen. Ratko Mladic appeared to be interested only in demanding the restoration of his military pension. In the end, the iron-pumping general of Mount Igman and the Siege of Sarajevo was a frail old man who aspired to be a pensioner.

These are pathetically ordinary men. We do them a favor when we depict them as evil geniuses with “hearts of darkness” as if they had stepped out of Joseph Conrad’s novel by the same name. Think of the last days of Osama Bin Laden as an aging man with dyed hair, wrapped in a blanket and watching old videos of himself.

Osama Bin Laden, Goran Hadzic, Ratko Mladic and now Anders Breivik — they would fit as case studies in a revised and updated edition of Eichmann in Jerusalem.