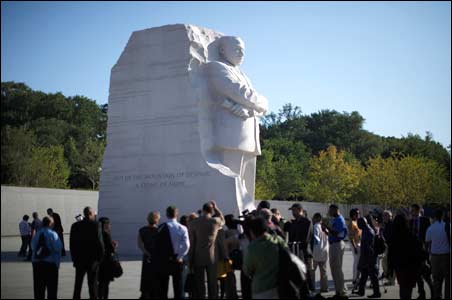 St. Paul played a big role in the long effort to complete the massive new memorial to the Rev. Martin Luther King Jr., which will be officially dedicated Sunday on the National Mall in Washington, D.C.

Chinese sculptor Lei Yixin is the sculptor of the 30-foot likeness of King. He was selected for the work after monument organizers saw him working in St. Paul five years ago and decided he was the guy for the job.

Because of St. Paul’s role, a contingent of Minnesotans will be on hand in D.C. Sunday for the big day, which comes on the 48th anniversary of King’s “I Have a Dream” speech.

The $120 million monument — which has had its share of controversy, some of it involving Yixin — sits on a 4-acre site on the mall near the Capitol. Planning began in 1996, when the Alpha Phi Alpha fraternity, to which King belonged, was given permission to build a memorial to the late civil rights leader in the nation’s capital.

It took years for the organizers to come up with a vision for the memorial — and with the money. Selection of a sculptor, too, took years, and the lengthy quest to find an artist finally brought them to St. Paul.

A ‘Rock’-ing good time in St. Paul
In 2006, Public Art St. Paul, a nonprofit arts advocacy group, held a “Minnesota Rocks!” sculpting competition called that drew sculptors from around the world to create stone sculptures in an outdoor studio.

Using Minnesota stone, the artists created works that, when finished, were placed in public locations around town. Among the sculptors was Lei Yixin, who is from Changsha, Hunan Province, which is one of St. Paul’s Sister Cities.

The event drew wide publicity at the time, and the Wall Street Journal did a story about the international artists working in stone on massive projects in St. Paul. MLK monument officials saw the story and wasted no time in booking tickets to St. Paul, said Christine Podas-Larson, president of Public Art St. Paul.

“They knew that a 30-foot sculpture of Dr. King was going to be the centerpiece of the memorial, and they’d been looking for several years for a sculptor who could work on that scale. And they had despaired,” Podas-Larson said.

“But when they saw publicity about how we had all these sculptors from around the world in St. Paul, they hopped on a plane. They knew they were going to find their sculptor. They didn’t know which one, but they knew they’d find their artist.”

St. Paul officials didn’t know they were coming, and neither did the sculptors.

“When the three men from Washington showed up, the artists were taking a nap; Lei Yixin was asleep behind a rock. One artist was awake and greeted them, but he didn’t believe them at first when they said they’d come to find a sculptor for the memorial.” 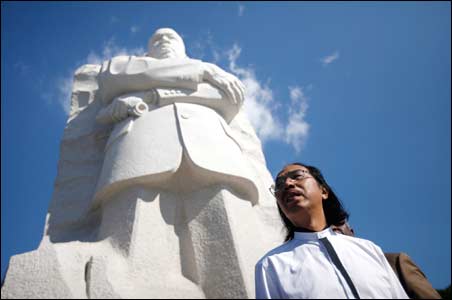 At some point, they woke up Lei.

After a while, they wanted to talk with Lei, but he didn’t speak English.

“Just then, Weiming Lu [an urban planner in downtown St. Paul] showed up on the site and was able to translate for Lei,” Podas-Larson said.

They wanted him to go to Washington to learn more about the project. But that was complicated, too, because visas were very hard to get in 2006, and Lei had to apply to stay in the country longer than the sculpting symposium, Podas-Larson said. “The Immigration Service said no. Finally, [Rep.] Betty McCollum stepped in and helped him get an extension, so he could go to D.C. and get the commission.”

Controversy after controversy
The memorial has seen its share of controversies. At first, there was an outcry because a Chinese sculptor had been chosen.

“When [the organizers] first came to town, we went out to lunch, and my first question was, ‘Won’t this be a problem because he’s not African-American?’ But they agreed that any project dealing with Martin Luther King Jr. transcended race and nationality. They were adamant about that,” she said.

“Of course, they did end up getting a lot of grief about that. But it seems, from what I can tell, that it has died down.”

Then, the first models of the MLK sculpture, unveiled in 2007, were criticized because some felt they made King look Asian. The models were later revised, and now there seems to be little concern about the statue’s look.

“I’ve seen probably 50 sculptures of my dad, and I would say 47 of them are not good reflections — that’s not to disparage an artist,” the younger King said. “This particular artist — he’s done a good job.”

And then there were unhappy American stone workers.

“The decision had been made, even before Lei was chosen as the artist, to use a certain white granite, unique to China, for the statue,” Podas-Larson said. “He carved it in China, and it was then taken apart into 158 pieces, like a jigsaw, and transported on a ship and brought to the National Mall, where it was reassembled.”

Lei brought his own team of Chinese stone workers.

Said a story this summer in Your Black World:

There are also some who would argue that Dr. King, a man who fought for the rights of American workers, might be concerned about the exclusion of black and white American workers on the project. Bringing Chinese workers across the world to work on a King memorial is an interesting reminder of corporate globalization that is taking place in America today. Throughout the economic recovery, American workers have been the least to benefit, while the wealthy and corporations have done quite well. Part of the reason for this division is due to the fact that wages are kept low by using workers overseas.

That controversy, too, seems to have faded, Podas-Larson said. “There’s nothing easy in the world of public art. Or the world,” she said.

Unassuming man with a booming voice
Lei returned to St. Paul last year for an art exhibit with other Chinese artists at St. Paul’s College of Visual Arts. He’s a noted artist in China, known as Master Lei, Podas-Larson said. He has a large body of work installed across that country. Like many Chinese artists during the Mao era, much of his early work depicts communist leaders, including Mao.

Podas-Larson calls him a self-effacing, shy man, with a “deep speaking voice, a commanding voice — he doesn’t talk much, but when he does, it’s deep and melodic; very compelling.”

Westerners have trouble pronouncing his wife’s name, so they call her “Rocky,” she said. Their son Ke Shi went to college in the United States and is helping his father with the statue installation.

Podas-Larson and other St. Paul arts officials were honored at a lunch for Lei, where Ed Jackson, executive architect of the memorial, asked them to stand and said the project couldn’t have happened without Public Art St. Paul.

This weekend, a contingent of St. Paul folks will be in prime seats at the dedication, at Jackson’s invitation. Those attending from Minnesota are:

• Podas-Larson and her husband, Kent Larson.

• Former board member Philip Rickey, a sculptor and initiator of “Minnesota Rocks!”

• Abe Gleeson, “Minnesota Rocks!” site manager who was on site for six weeks with Lei.

• Mary Warpeha and Mike Xiong of the USChina People’s Friendship Association of Minnesota.

• Ning Li, a native of China and a Minnesota-based friend of the Leis.

And some of them are having dinner Friday night with the Lei family. “This is quite exciting. We are so honored,” Podas-Larson said.

Still a St. Paul presence
You can find a very visible example of Lei’s work, his sculpture “Meditation,” displayed in St. Paul’s Phalen Park. It’s the sculpture he produced in 2006 for the symposium in St. Paul: the large stone face of a Hunan girl, carved from limestone quarried in Minnesota.

The statue was defaced by vandals in the summer of 2008, much to the outrage of the community. But it’s been cleaned up and is now watched over by 120 “stewards” who signed up to walk by the statue on a regular basis and help clean it twice a year.

After the spray-painted graffiti was cleaned up, the city held a program, and a statement from Lei was read: He quoted from Martin Luther King Jr. and said he forgave the vandals.