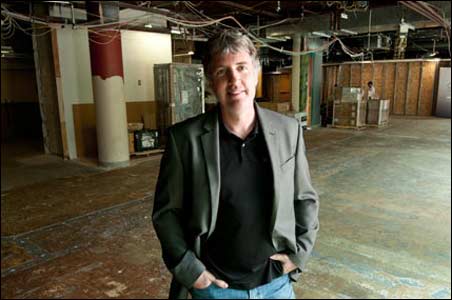 “I learned a lot about growing a business there,” says the 45-year-old co-founder of the software firm Code 42.

Born in 2001 as the dot com bubble burst, Code 42 built software for a slew of other companies — from Sun Country Airlines to Target — while pursuing the primary dream of launching its own product.

After building much of the technology for a massive endeavor — a peer-to-peer, Facebook-like desktop application that “the web wasn’t ready for,” says Dornquast — Code 42 wisely dialed the project back to one key function it had mastered: data backup.

Launched a mere six years later, the three-tiered CrashPlan product now secures data for millions of consumers, small businesses, and large companies, and it’s the foundation of the local firm, which has been doubling in size annually. Accordingly, the 10,000-square-foot expansion at its Riverplace headquarters will double the firm’s physical space, making room (and then some) for the 100-plus people Dornquast expects to employ by next year.

Line contributing writer Jeremy Stratton got him talking about his path and the growth of his company without venture capital. Dornquast offers some well-earned wisdom about the entrepreneurial ecosystem; our thrifty (although risk-averse) Midwestern ethic; and the people, passion, and mistakes it apparently takes to succeed as a software startup.

On ‘Founders’
When we were at 10 people, I felt like everyone was really a founder. They all were taking a risk at a small company. And when we got to 20, I thought, ‘You know, everyone is still a founder, they’re all taking a risk and making these fundamental decisions that will play out for years to come.’ Isn’t that what a founder kind of does?

And then we got to 50 people, and. … I felt like most of them still were founders, because I was getting a management team now that had 20–30 years of experience in verticals, and they were the best at what they did, and I felt like, ‘They’re shaping the company; they’re founders, too.’

When you look at it that way, you don’t treat people as employees, you treat them as people that are taking a risk with your vision.

On Company “DNA” and Midwestern Thriftiness
There are lots of things that you sort of realize in hindsight are inherent to your DNA and contribute to your success. I hinted at one, that was people. Another one is … a passion for the customer, and it might manifest itself in any way. In our case it was ease of use. Everything we do … we are eliminating clicks and eliminating taps. We don’t want to overload the users.

There’s another thing that we have in our DNA — and I think a lot of Minnesota companies have this potential, and it does not exist everywhere. It’s this sort of common-sense thriftiness of, ‘I am going to find a way. I am going to constrain my money.’ I would say that this is the only good thing that came out of not having venture capital. It forced a thriftiness on us, and that thriftiness drove innovation to figure out how to solve this in ways that reduce cost.

On the Genesis of CrashPlan, and Being Ready for Success
[CrashPlan] was a subset of a larger idea we had, and we felt like the larger idea couldn’t be delivered in time with the budget we had, so we took the part that we personally valued the most, and that was protecting our information.

It’s expensive to reach consumers, so I decided to start with business. I said, ‘Hey, you’ve got mission-critical data on laptops and desktops, you should back that up.’ And the businesses by and large said, ‘Nah, it’s unnecessary, it’s on the server.’

I’m thinking, ‘What if it’s not?’ But that doesn’t help me. We tried to sell it, it wasn’t working, so I said, ‘Let’s just go back to the vision that I was passionate about: the consumer.’

We launched it at Macworld 2007, January. This was our goal: go to Macworld, get a couple hundred customers, enough to pay for the trip, and then take care of them, and work through any issues that you find along the way.

Businesses start coming up, saying ‘We need your product.’ And I’d say, ‘No, this is for personal.’ And I’d think to myself, ‘Where were you last year?’ And it kept happening. And by the end of the show, I stopped saying, ‘No,’ and I started saying, ‘It’s coming.’

The next day, I immediately call my office and say, “How are my 200 people doing? How’s it working?’ And they said, ‘We’re down.’

‘We’re on the home page of Digg. We’ve got thousands of people per second. And it’s crashing.’

We had over 30,000 people [visit the website] the day after the show. … We got slash dotted! We got crushed, the data effect! We were not designed to scale at that level. Thriftiness, right?

I suspect that we’d be substantially bigger, right? Failed opportunity. It’s one of many.

On “Agile Development” and Breaking the Rules
In order to succeed, you can’t follow the normal rules. You can’t build up a requirements spec for six months. You don’t have six months. You do those in real time. You leverage the intimacy and the confidence you have in each other as a team. You sort of break the rules and get it out quicker, and you can … back-build those other things. You can say, ‘Now that it’s built, let’s write the requirements to fit into the corporate policy.’ (Laughs.) ‘Now that it’s running, let’s talk about how it should look.’ It’s served us pretty well.

On Building (and Marketing) a Successful Product
The difference between the winners and the losers are the ones that spend that little tiny bit more. They’re not necessarily smarter, they’re not necessarily even more hard-working, it’s like they’re more perfectionist: ‘We’re just going to go a little bit longer. I know we think we’re done, but give me ten more minutes. Can we think of anything else?’ We do that a lot here.

The second thing: We treat support at our organization like marketing. It’s not a cost center. If I had 10  dollars to spend on marketing, I’d rather give … four of it to engineering, four of it to support, and two of it to marketing. If I can make the product that much better, and if I can treat the customer right, directly, the customer will market it for me.

On Keeping Our Homegrown Tech Companies
There’s a bad virus that Minnesota has historically had for a long time: We sell our tech companies to the east and west coast. It didn’t use to be that way, in the CDC [Control Data Corporation] days. It kills us; the ecosystem isn’t allowed to have multiples of success. I succeed, I sell to Oracle, what happens? I’m not hiring, I’m not that fun shop you’ve grown locally.

We have a few — Digital River, right? A few of them stayed. But what’s interesting to me is if you measure the number of successes that have been sold … historically, over the last 20 years, you would think we were Silicon Prairie. You would think we’d be thriving.

On (Not) Taking Venture Capital
I didn’t take VC money, and it was probably the biggest mistake we made … thinking that we needed to do it ourselves. There was some benefit of it, but there’s no question we would be substantially bigger as a company if we had. The sort of loss of ownership — it doesn’t have to be that much.

I’m not anti-capital. There’s nothing more valuable than having someone buy off on your idea. If you can’t build a business plan and show passion … if you can’t convince them — this is a pretty good test.  And if you don’t get the money and you still do it anyway, it proves that you really do have that passion, and you probably will succeed.

If you can’t get them to buy off, there might be something wrong with your plan. It doesn’t mean you should stop. If I had stopped when they said they didn’t need our product, where would we be?

On Entrepreneurial ‘Entitlement’
There’s also this entitlement perception: ‘I have this great idea, people should give me money!’ Bullshit. Stop your whining and create something. If you were really passionate, you’d already be building it. If you don’t have that passion, then no one’s going to give you money and you’re not going to succeed anyway.

Jeremy Stratton is the former Innovation and Jobs Editor of The Line. This article is reprinted in partnership with The Line, an online chronicle of Twin Cities creativity in entrepreneurship, culture, retail, placemaking, the arts, and other elements of the new creative economy.