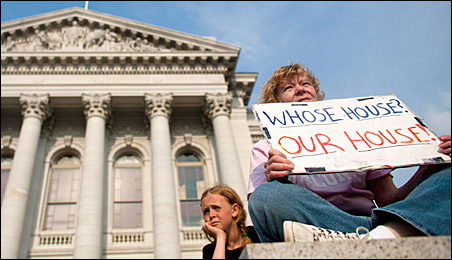 REUTERS/Darren Hauck
A protester holds a sign outside the Wisconsin State Capitol earlier this summer.

Busloads of Minnesotans have headed to Wisconsin and Iowa to raise voices in huge political events in those states.

Minnesota unions — whose ranks include significant numbers of people who live in Senate District 10, the district currently held by Harsdorf — have been pushing hard for months.

“The passions are high in Wisconsin,” said Candace Lund, mobilization/organization director for Minnesota’s AFL-CIO. “There’s no middle ground. Persuasion no longer applies. We are there to speak to the choir.”

That means that Minnesota labor is in Wisconsin “speaking to the choir.”

Turning out the base is the absolute key in the six races being held today in which Democrats are attempting to unseat six Republicans. (On Aug. 16, there will be two other races, in which incumbent Democrats are being challenged by Republicans.)

There are high hopes among Democrats that they can gain at least three seats, which would put them back in control of the Senate, where Republicans currently have a 19-14 advantage.

The Harsdorf race is considered an uphill climb for Moore and her supporters.

“But we have our fingers crossed,” said Lund.

She says Democrats have one advantage in this late summer election. The recall petitions — more than 23,000 signed the petition to recall Harsdorf — gave Democrats a specific list, complete with addresses, of people most likely prepared to support Moore.

“It’s a great list,” Lund said. “We go to a street and see three Harsdorf signs and two Moore signs and, invariably, the Moore signs are at homes where people are on the list.”

Although it was the slashing of union rights of public employees by the administration of Gov. Scott Walker that initially set the stage for these unprecedented recalls, those issues have not been high-profile ones during the campaigns.

Other issues — cuts to education and other government services and opposition to any tax increases — have become the most public issues in a series of state campaigns that have led to $26 million in spending, more than half of that from independent organizations representing both ends of the political spectrum.

Lund says that consulting groups may have steered the campaigns to “the other issues,” but union members, and their supporters, still are hugely inspired by Walker’s push to slash union strength.

And it is the union issue that seems to be inspiring Minnesota GOP members to cross the river and work for Harsdorf. Minnesota Republicans are running phone banks. (So are Minnesota union members.)

Republican activists are claiming that big union muscle is creating an unfair playing field in Wisconsin.

There is a weariness in Wisconsin of “outsiders” being so heavily involved in the Badger State races.

“No question,” said Lund, “sometimes people complain, ‘You’re from out of state.’ But I think most understand that in this case [the Harsdorf-Moore race] the border’s pretty fluid. You have so many people who live in Wisconsin but work in Minnesota.”

There are no exact figures, but there’s a sense among Minnesota activists that Bachmann is getting more help from Minnesota than Pawlenty.

A busload or two of her supporters are expected to head south to help with any tasks they’re called on to do to encourage her supporters to participate in the straw poll.

It’s not clear whether Pawlenty, who is lagging badly in the polls, can fill up a bus with supporters, but there are expected to be at least a couple of vans filled with volunteers headed to Ames to assist the former Minnesota governor.

“I’ll do whatever they ask,” said Ben Golnik, a former campaign strategist for John McCain who now is supporting Pawlenty as a volunteer.

In truth, it’s not quite so much fun for Minnesotans to show up for the Iowa straw poll as it was years ago.

Tony Sutton, for example, recalls the 1995 straw poll, when Phil Gramms and Bob Dole shared the top spot. At the time, Sutton, who now is the Minnesota state GOP chairman, was the Minnesota campaign manager for Gramms.

“Back then, anyone could vote,” said Sutton. “We brought in three busloads from Minnesota to vote for Gramms. But Bob Dole was bringing in just as many people from Kansas. After that, they clamped down on who could vote.”

Now, in addition to paying $30 to vote (the money goes to the Iowa GOP), you must have identification proving you’re an Iowan to play in the straw poll.

Sutton is being careful to avoid supporting any single GOP candidate. Recall that Sutton’s predecessor, Ron Carey, endorsed Mike Hucakbee for president before the 2008 state caucuses, outraging many party members.

Carey, by the way, has continued to be a newsmaker in this race. At one point, he briefly was chief of staff for Bachmann but, after leaving that post, came out in support of Pawlenty. He further upset Bachmann’s supporters by saying “she’s not ready” to be president.

The point: Sutton will remain carefully neutral among Republicans.

He has been invited by the Iowa GOP to come to Ames, but only as a guest, an observer.

“It’s like a festival for political junkies,” he said.

Minnesota Senate Majority Leader Amy Koch also may go to Ames for the straw poll. To date, she’s not endorsed any of the candidates but is interested in being around “a bunch of other political junkies.”

If Iowa’s a festival, Wisconsin’s a long, hard siege. Massive protests began in Wisconsin clear back in February.

“There is some burnout,” said Lund. “But people know there is so much on the line.”

What will be left after Wisconsin races finally are settled and the straw poll is yesterday’s headline?

The activists can never relax.

Primaries for two special Senate elections in Minnesota will be held next month with general elections in October to fill the seats held by DFLers Linda Berglin, who retired, and the late Linda Scheid.