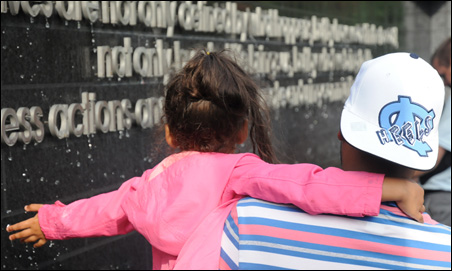 MinnPost photo by James Nord
Friends and family members get their first look at the memorial wall.

At that same moment four years later, her loved ones were at the scene mourning her death and joining hundreds of others affected by the disaster.

This time, they grieved at a memorial for the 13 casualties and 145 injured victims of the 2007 collapse that shook Minnesota and much of the nation. The memorial park was unveiled Monday by Gov. Mark Dayton and Minneapolis Mayor R.T. Rybak.

Scrapping the planned “moment of silence” to grieve, onlookers trickled into the fenced-off “35W Bridge Remembrance Garden” near Gold Medal park in Minneapolis and simply stood in front of the centerpiece sculpture.

Others read the “inspirational phrase” recognizing emergency responders that adorns the wall, which sits on a high bank of the Mississippi river.

It reads: “Our lives are not only defined by what happens, but by how we act in the face of it, not only by what life brings us, but by what we bring to life. Selfless actions and compassion create enduring community out of tragic events.”

Color guard members of the Minneapolis Police Department ceremonially led off the service, and Rybak offered opening remarks. His speech built on the sentiment ensconced on the memorial wall: The “moment of horror” now entrenched in Minnesota history has served to bring communities together.

“The common ground will be what we share together,” he said.

Dayton, who ordered flags at the State Capitol Complex to be flown at half-staff from sunrise to sunset, called the collapse “one of those ‘Why, God?’ moments.” He later added, “There is nothing we can do to bring them back, but this memory is a fitting tribute.” 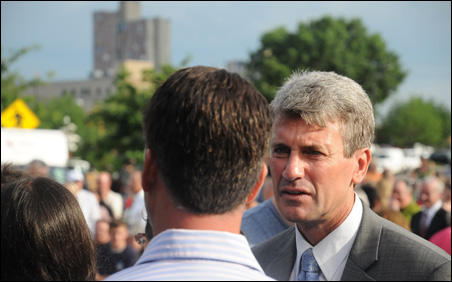 Friends and family stood before the amassed mourners to share stories of their loved ones. Some stumbled over their words; others fought back tears. The crowd, nearly silent, responded with applause after each memorial.

“The mourning is gone, the day is here — now it’s time to say goodbye,” said Bradley Blackhawk, a relative of Julia Blackhawk.

Julie Graves and Randi-Lynn Leonard, while grieving with the others, also celebrated how fortunate they are to be alive.

Graves and Leonard were among 52 survivors pulled to safety from a tipped-over school bus that had been bringing children from a Minneapolis community center to a water park that day.

Leonard, now 15, managed to escape without any injuries. But Graves, a staff member, fractured bones in her feet and back and was rushed to Hennepin County Medical Center.

Poised and concise, Leonard describes the awful scene with gritty clarity. The bus stopped with a thud in the midst of a game Leonard had been playing with her friend. “All of a sudden the person in front of us … stood up and her lip was bleeding and she was like, ‘Oh my God.’ “

Counselors and staff told the children to leave their belongings and rush off the bus. The children then hopped off the side of the bridge into the “arms of strangers.”

After milling about on a path near the bridge and seeing her friends bleeding and injured, Leonard decided to head back toward the bus.

“Then I went down toward the bridge to get my stuff and I saw Julie Graves lying on the ground bloody, just full of blood, and I lost it and I was just crying and overwhelmed,” she said. “It was just really hard.”

It’s likely the memorial will mean almost as much to Graves, Leonard and the rest of the survivors as it will to those who lost someone they love in the collapse. 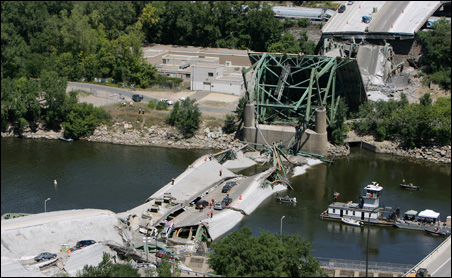 “I’m sure I’ll come here and share it with my kids, and we’ll come here and it will be a place to come and go through my thoughts and be thankful for what I’ve got and again [think] of those 13,” Graves said. “I think it’s really tasteful and beautiful and I think they did a good job.”

Leonard said she would visit the memorial often, as well. “I think about it a lot, especially as it [the anniversary] comes around,” she said. “I woke up crying this morning. … I just thought of all the people who lost their lives and I felt just horrible about it.”

A quiet observer
One public servant stood quietly for much of the ceremony and remained in the background, off to the side, long after the service ended.

Rep. Ryan Winkler was a freshman lawmaker from Golden Valley when the bridge collapsed. He was also the main force in the Legislature behind setting up a $37 million state survivor fund. All told, survivors of the collapse received nearly $100 million from separate lawsuits and the state.

“Really, you have one person who starts to do something, and in this instance it was Ryan,” said Rep. Phyllis Kahn, DFL-Minneapolis, who also attended the event.

“To me, it was pretty simple. We owned the bridge, it fell down, and no other person caused it, so it was our responsibility,” Winkler said, standing on a walkway overlooking the Mississippi River after the service had ended. “I thought we needed to do something, and I didn’t want these survivors to have to be basically prisoners to a long legal process.” 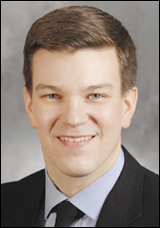 At the bill signing, Kahn said, someone asked Winkler how it felt to pass such meaningful legislation during his first year as a representative. He responded, “”Well, I’ve only been in the Legislature for five months, so I don’t have a lot to compare it to.”

“I should have retired from the Legislature after that,” Winkler said, cracking a rare smile.

Winkler, known for fiery tirades aimed at Republicans across the House floor, seemed subdued and mournful. He said he has gotten to know the families of the 13 dead and spoke to them at the memorial.