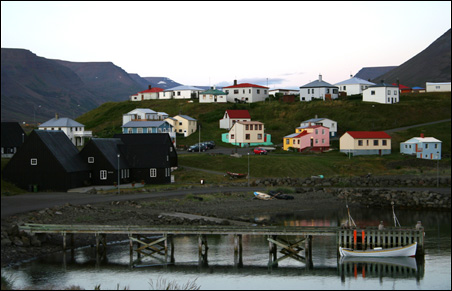 MinnPost photo by Nick Hayes
In the northwestern corner of Iceland, about 40 miles south of the Arctic Circle, Hofsos lies on the eastern shore of the Skagafjord.

HOFSOS, Iceland — Last Thursday would have been Bill Holm’s 68th birthday. His friends in Hofsos, Iceland, observed the day by raising a few glasses in remembrance of their friend from Minneota, Minn. Holm had spent every summer there since 1998 when he bought “Brimnes,” a cottage in the town’s center. There he wrote “The Windows of Brimnes: An American in Iceland” (2007).

Had Bill not died in February 2009, I would have taken up his invitation to visit him there in the summer of 2009. This summer I accepted when his wife Marcy Brekken renewed the invitation. Although I missed the celebration of his birthday in Hofsos by a few days, I had spent the preceding week in Iceland re-tracing Bill’s footsteps and picking up where his conversations with friends had left off.

I had always thought of Bill as “the man from Minneota, Minnesota,” the quintessential voice of our small towns and prairie. He was that, of course. He was also our lost Icelander in Minnesota. A fourth-generation Icelandic American, Bill had a build that reminded you of mythical heroes in ancient Icelandic sagas and a heart that brought him to tears the day he took possession of his house in Hofsos.

He had found something in Iceland, something I suspect many of us search for. I made the trip to find out what it was.

In the northwestern corner of Iceland, about 40 miles south of the Arctic Circle, Hofsos lies on the eastern shore of the Skagafjord, where the Hof River meets the sea and the fjord pulls your eyes northward to gaze at islands celebrated in thousand year old sagas and the vista of the Artic Ocean. 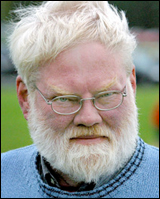 The town puts its population at about 200. You suspect, however, that the population of Hofsos, like all of rural Iceland, is leaking and flowing toward Reykjavik. Globalization has retired Hofsos’ days as a fishing village.

Today, the main activity in Hofsos revolves around the Icelandic Emigration Center. It serves as a research, genealogy and education center for the history of the immigration of the 20, 000 Icelanders (out of a population of 85, 000) from 1870 to 1910. Most ended up in Minnesota or a day’s drive from Minnesota in Wisconsin, North Dakota or Manitoba.

‘Western Icelanders’
You can’t blame a few others for saying goodbye to the long winters and choosing more moderate climes. Bill found evidence of a distant Icelandic cousin who settled in Brazil.

In summertime, these “western Icelanders,” Iceland’s term for its immigrants to Canada and the United States and their descendants, appear daily at the center, where the research staff politely and, in most cases, quickly answer inquiries about their ancestors. 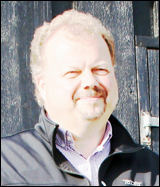 “When we give them the information on their ancestors in Iceland,” Valgeir Thorvaldsson, the center’s director, says, “it’s like giving them gold.”

If the visitors happen to take in the current exhibition of photographs of Icelandic immigrants in the United States and Canada, they would come upon an1885 photo of Bill Holm’s great- grandfather, Johannes Sveinsson Holm. Other tourists to Hofsos come on a different mission. They arrive at the Emigration Center asking if anyone can tell them where the writer Bill Holm had lived.

You would be hard-pressed to find anyone in Hofsos who doesn’t know the answer to that question. Brimnes stands a stone’s throw away from the Emigration Center. Its director, Valgeir Thorvaldsson, is also a farmer and master carpenter. In the 1990s, he had purchased the cottage.

“Houses have souls,” Valgeir told me. “I am always careful to preserve the soul of the house.”

His friend Bill Holm desperately wanted to buy a house in Hofsos. Valgeir only sold it because Bill was a friend but, equally important, was compatible with the soul of the house. Valgeir also did not disturb or give notice to the house ghost who, as a few of Bill’s friends told me, bashfully stays in the small guest room just off the kitchen.

“Your place on this planet,” Bill wrote in “The Windows of Brimnes,” “is where (among other things) the light feels right to you.” 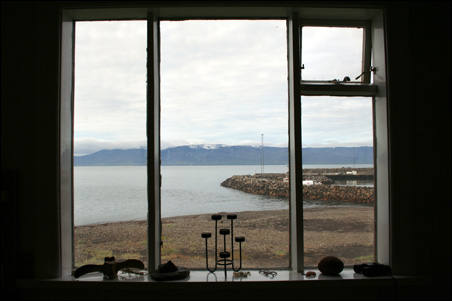 MinnPost photo by Nick Hayes
The main window in Brimnes overlooking the fjord.

The light inside Brimnes is right. When I first stepped inside the cottage and approached the main window overlooking the fjord, the oblique, pastel Arctic light told me that this truly was Bill’s place. There is some evidence inside of a trip to IKEA. Otherwise, the interior of Brimnes suggests that Bill had not embraced the Scandinavian modern look. The stuffed bookcases against the walls, the piles of books on most of the available tabletop space, the upright piano and its stacks of sheet music, CDs of classical music, and the walls covered with photos, program notes from Bill’s readings, posters, and memories of good times past confirm that Bill spent far more time in any one of the used book stores he frequented than in big box stores, Room & Board and Crate & Barrel combined.

The books left behind in Brimnes or at his home in Minneota testify to a ravenous reader with an appetite for a wide and diverse range of topics. At a time, when surveys in the United States document that one out of four Americans (who are more likely to be men than women) typically do not read a single book in a year, you suspect Bill read on a typical day more than the average American reads in a year (answer: four).

Long tradition
An Icelander recognizes something more in Bill’s passion for reading. His friend Vidar Hreinsson — author, literary scholar and director of the Reykjavik Academy — places Bill in a long tradition of rural Iceland.

“He is part of a strong tradition,” Hreinsson explained to me, “of the self-educated, rural Icelandic intellectual and writer, which also means a certain anti-educational, anti-intellectual, and anti-urban mentality.”

With all respect to Bill’s alma mater — Gustavus Adolphus College and the University of Kansas, which awarded him master’s degree — the habits of Bill’s mind owe more to the traditions of Icelandic peasants than to any school curriculum plan. You knew it by the way he frowned when he referred to Reykjavik or smiled with pride when he spoke of his friend Kristan Arnason. A farmer and carpenter just north of Hofsos, Arnason obviously did not acquire his mastery of Danish and English or his gift as a poet from the local grammar school that was the extent of his formal education.

A “western Icelander,” Bill benefitted from Iceland’s relatively recent appreciation of its lost immigrant cousins. In the late 19th century, Icelanders, like most Europeans, scorned or simply forgot their immigrants who vanished into North America. Hreinsson, who has written a biography of the leading poet of the Icelandic immigration and a hero of Bill, Stephan Stephansson (1853-1927), says that Icelanders only came to recognize the role of the “western Icelanders” in their history and culture in the 1990s. Icelanders discovered that more poetry had been written by the “western Icelanders” than by Icelanders themselves. The immigrant history and literature was beginning to have a hold and influence on the Icelandic imagination just about the time Bill settled in Hofsos. 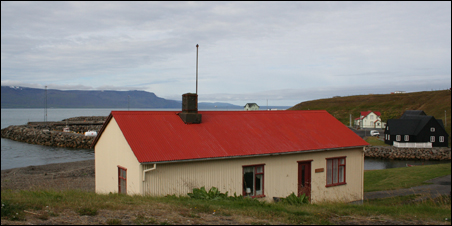 A popular, contemporary author acknowledges not only a debt to the “western Icelanders,” but a debt to Bill. When I asked Reykjavik writer Andri Snaer Magnuson for his thoughts on Bill, he answered without hesitation. “I modeled my recent book — ‘Dreamland — A Self Help Manual for a Frightened Nation,’ on Bill Holm’s ‘The Music of Failure,'” he said.

Magnuson also identifies with the typically Icelandic irreverence in Bill. He spent his first 20 years in the United States. As a schoolboy in New Hampshire, Magnuson recalls that he always crossed his fingers when he had to say the Pledge of Allegiance. “I suspect Bill Holm did the same,” he added, “not because we were anti-American but because we Icelanders are skeptical about taking an oath.”

A friend of Bill’s in Hofsos complained that Bill added “too damn much whipped cream and jam” to his descriptions of Iceland. Valgeir Thorvaldsson recalls that, when Bill would encounter an Icelander he didn’t like, he would say, “They are not really Icelanders.” (Personally, I thought Bill had gone a bit over-board in his enthusiasm for the Icelandic national dish, hakarl — shark that is first allowed to rot and then smoked — and roasted sheep’s head).

Bill was not blind. “The Windows of Brimnes” ends with a pessimistic vision of the coming of ecological and economic disaster with the country’s embrace of aluminum smelters and a massive dam at Karahnjukur. In the end, as Hreinsson explained to me, Bill had two metaphors for Iceland — “Hofsos was his metaphor for the ideal society; the dam was his metaphor for Icelandic stupidity.”

In part, Bill had found in Iceland an escape from America. As Hreinsson wrote in a tribute to his friend: “Bill Holm has created an imaginary, selective image of Iceland, a subversive, critical contrast to [the] America of today.”

Partially true. Yet he found something else in Brimnes. I never saw the ghost of Brimnes. Yet, at about 3 every morning, when the morning light would break through the August night, I was certain I could hear the notes of a Bach fugue coming from the upright piano by the window.

The Icelandic Emigration Center at Hofsos hopes one day soon to have an exhibition devoted to the life and work of Bill Holm. I’ll meet you there for the opening.