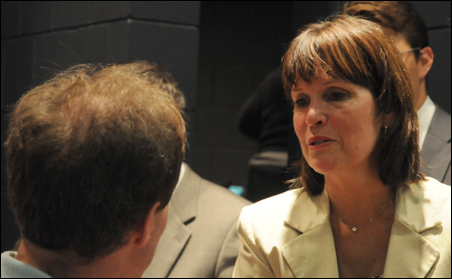 MinnPost photo by James Nord
Rep. Betty McCollum meets with a constituent after the event.

Mary Leary, a small business owner from Mendota Heights, isn’t much concerned with the volatility currently gripping Wall Street. The partisanship and structural gridlock in national American politics are what’s on her mind.

She was one of more than 100 who gathered in St. Paul Tuesday night for Congresswoman Betty McCollum’s town hall meeting.

“It’s more of the gridlock that has become really, really bad,” Leary said as she waited to see McCollum, a politician she admires. “It’s lethal.”

Constituents worried about rollercoaster stock markets, near government default, a potentially broken political system and mounting federal debt flocked to St. Catherine’s University in St. Paul to hear from McCollum and state lawmakers about their thoughts on how these crises can be fixed.

McCollum targets Tea Party
McCollum’s message was full of anger and blame for the Tea Party minority that she says has held national American politics hostage since the 2010 election. Most in attendance seemed to agree, with the exception of a few loud detractors.

“These Tea Party Republican policies are creating insecurity in our communities, they’re disrupting a fragile economic recovery … and they’re threatening to pull our economy back to recession,” the 4th District Democratic congresswoman said.

“It’s a difficult time in Washington and in Minnesota, and with so much uncertainty, I want you to know where I stand,” she said. “I want to put people back to work, and, yes, I want those workers to have rights. I want people who have worked all their lives to be able to retire with dignity and security. I want their grandchildren to have access to good schools that will help prepare them for a lifetime of success.”

Questions ranged from an impassioned “Who do the Tea Partiers think they are?’ to “What is going to happen to my Social Security and Medicare benefits?” Local issues surfaced, too, with the likes of “What are you and the federal government doing to help businesses on the Central Corridor Light Rail line?”

Wes Davey of St. Paul, a veteran whose family has served a total of four tours in Iraq and Afghanistan, had one of the most passionate questions for McCollum: When are the troops coming home, and when is military spending going to be reined in? 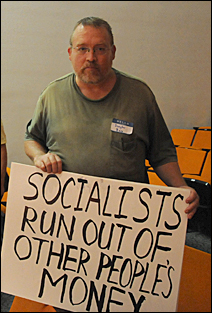 He pointed to the more than 30 U.S. troops killed on Saturday and other servicemen and women who have suffered to fight for their country while the American public hasn’t shared the burden with tax increases to fund the effort.

McCollum, an advocate of ending the wars in Iraq and Afghanistan, pointed to defense cuts she’s sponsored. “Between doing that and [adding] some revenues, we can bring ourselves into balance pretty quickly,” she said. “So I do agree with you — it’s time to bring our troops home.”

Tea Party advocates in minority at meeting
But the calls from McCollum and her colleagues for tax hikes, applauded by most, were often met with low jeers from several in the audience. During perhaps the most emotional moment of the evening — while McCollum was calling the Tea Party “a new radical movement that is willing to break the established rules” — a man began jumping over seats and clambering over attendees to get out of the room.

“You seem to be ignoring their agenda,” he shouted at McCollum. “I’m leaving.”

Others, though, like Douglas Bass, chose to speak to McCollum after the event in a more subdued tone.

Bass — who carried a sign that read, “One man’s Tea Partier is another man’s freedom fighter” — recognized that he was in the minority at the meeting, especially compared with the high-profile 2009 town hall meetings that often focused on objections to federal health care reform.

He said he was also struck by the attendees’ “genuine bewilderment as to why the electorate has rejected them to the extent that it has,” which surfaced in many of the questions.

McCollum also noted the importance of the 2012 elections. Several constituents essentially asked her, “What happened to President Barack Obama — once a progressive champion — during the recent debt ceiling negotiations?”

A man who identified himself as John from St. Paul called the debt deal “more of a capitulation than a compromise” from Obama’s end, echoing what seems to be a feeling among many of the nation’s progressives who helped elect the president in 2008.

The notion, aired at the Netroots Nation conference for liberal activists in Minneapolis in June, seems to have continued growing since serious wrangling over the debt ceiling began.

McCollum, who voted against the deal, called the compromise “a prisoner’s dilemma” and said Obama took the responsibility to avert a debilitating default because he didn’t have the votes to pass “clean” debt ceiling legislation or include revenue increases in the deal.

“The president needs reinforcements,” McCollum said after the meeting, recognizing the Tea Party takeover. “Elections have consequences, and we’ll have to see what happens in the next election.”

“I have to admit, it was really amazing,” McCollum said of the event. “We knew we’d get a good turnout, but the turnout was over the top … People came because they’re frustrated, they’re concerned — in some cases, as you heard, they’re angry — and gravely disappointed at what they see happening in Washington and here in Minnesota, and that is people not buckling down and working together to get the job done right.”