DC Decoder gets you up to speed with this short reading guide, some highlights of Perry profiles, including Perry’s undergraduate days at Texas A&M and his record as the longest serving head of the Lone Star state. 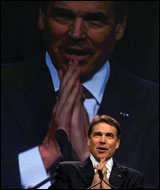 1. For the quickest of primers, see The Christian Science Monitor’s “11 Questions about Rick Perry and his White House bid.” This should give you a general lay of the land, situating Perry in the context of his own life and the Republican nomination process.

2. To get a sense of Perry before he was in the political spotlight, check out Texas Tribune’s “Texas A&M Years Launched Perry — And a Rivalry.” Perry, one of A&M’s famous “yell leaders,” was both a prolific college prankster and a shrewd political operator.

3. For a rapid backgrounder on Perry’s political career, the Houston Chronicle has this slideshow of each of Perry’s races for public office since 1984. Over that 27 year span, Perry has never lost an election.

1. Perry’s record as governor of Texas comes down to one word: Jobs.

What Perry argues: two out of every five jobs created in the United States since 2009 have come from Texas, proving the value of a low regulation, low taxation environment.

The counterpoint? This, from the Austin-American Statesman:

Most people know of Texas’ reputation for creating jobs — the cornerstone of Perry’s pitch that limited government, less regulation and low taxes are the tonic for what ails the nation. Yet almost half of the state’s job growth the past two years was led by education, health care and government, the sectors of the economy that will now take a hit as federal stimulus money runs out and the Legislature’s eight percent cut in state spending translates into thousands of layoffs among state workers and teachers in the coming weeks.

Also, Texas is tied with Mississippi as the nation’s leaders in minimum wage jobs. And conservatives argue that Texas can do more to lower its tax burden on businesses, which is higher than the national average and states such as California and Massachusetts that have a personal income tax.

2. Want the data behind what Perry supporters call the “Texas miracle” of job creation? The Texas Tribune has it here, including this choice bit:

3. “Dear Yankee,” Texas Monthly writes, “Eight things you ought to know before you start writing stories about Rick Perry.” This includes the fact that Perry is not George W. Bush, that he’s not a weak governor, and that it’s not a big deal that Perry was once a Democrat.

1. Even before he formally got into the race, more than a half-dozen “Super PACs,” political groups set up to rake in donations and then spend money on Perry’s behalf, sprouted up across the country urging him to run and campaigning for him in places like Iowa.

2. Widely regarded as a powerful retail politician, get a sense for Perry’s ability to work a room, kiss corporations babies and generally ingratiate himself with anyone and everyone with POLITICO’s story of Perry “schooling” Congresswoman Michele Bachmann at the ancient art of glad-handing.

3. Retail politics isn’t the only thing Perry does with aplomb – he’s also got an inside track to raising megabucks from major Republican donors.

4. Perry has cut a video introducing him to America, which includes clips from what appear to be campaign ads during his 27 years in politics. Check it out below.