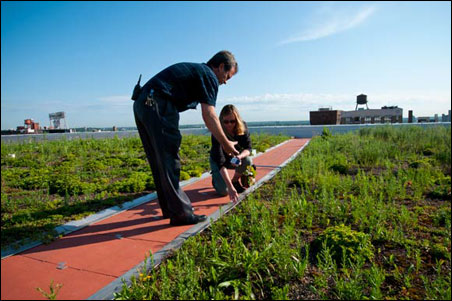 Photo by Bill Kelley
Installed in September of 2009, the green roof is nearing the end of its second full summer.

With the exception of the maintenance crew and an occasional researcher, Target Center‘s green roof is off limits to the public. Between the fragility of the plants that grow there, the need to protect the arena’s roof, and the wisdom of keeping tour groups off of the top of very tall buildings, the green roof is considered to be best left undisturbed. So photographer Bill Kelley and I felt pretty lucky to get to see the 2.5-acre prairie in the sky on a warm, clear-blue-sky day a couple weeks back.

Installed in September of 2009, the green roof is nearing the end of its second full summer. So far so good, says Tom Reller, senior director of operations for the Target Center. “The city wanted to make a sustainable choice with this roof and except for one little bad spot that had to be fixed, everything has been going really well up here.”

Looking out across this skyscraper prairie, we see that plants in hues of mostly purple and yellow are in bloom, butterflies are fluttering around and grasshoppers are everywhere. It feels weird, but as we move across the roof we follow Reller’s instructions to step gingerly on the plants rather than walking directly on the roof, which could cause damage and future leaks. You can’t tell it when you’re up there, but from the air the rooftop garden looks like a huge leaf as thousands of pavers, which resemble leaf veins, divide the different planting areas from each other.

Minneapolis chose to replace the Target Center’s aging traditional roof with a more sustainable and long-lived green one for many reasons, including providing a model for managing stormwater runoff (about 1 million gallons annually), conserving energy, and reducing the urban heat island downtown —  because plants help bring down the roof’s temperature. Two years later, calculating just how much water and energy conservation the roof offers has been tricky, says Reller. But efforts to quantify energy savings and runoff reduction are under way.

The Greening of a Roof

Not surprisingly, it took a team of experts to make the $5.32 million green roof project a success. The design team included: Kestrel Design Group, who created the green roof design; architectural firm Leo A. Daly; and roofing consultant Inspec. Stock Roofing, a Tecta America company, served as the general contractor and did the actual installation of the roof.

Unlike a typical garden, the green roof requires an assortment of gadgets and technology to make it a success. For example, a waterproof membrane keeps out dampness and helps stave off problems caused by fungi and bacteria. An Electric Field Vector mapping system helps detect leaks.

Because the building is an arena with an enormous, open space in its center, ensuring a safe weight on the rooftop was crucial. So plants in the “growing zone” in the center of the roof are rooted in only 1.75 inches of growing medium while plants around the perimeter enjoy a depth of about 2.5 inches. The fact that plants have done so well on the roof has been a happy surprise to many.

“This is the first project where native plants were planted in such a shallow growing medium,” says Nathalie Shanstrom, a landscape architect with Kestrel Design Group, which also designed the green roofs on downtown’s Central library and City Hall. “We’ve had good luck with four inches, but people usually say [not to] plant native plants so shallowly — what we’ve found here is that they adapted and the roots grew horizontally rather than vertically.” She attributes much of the success of the native plants to the roof’s 11 miles of irrigation lines, which are triggered by a dryness sensor.

Kestrel chose native plants for the roof because they’re adapted to our region and can better withstand climatic extremes, pests, and disease problems. To install the native plants, plugs of many varieties such as columbine, lanceleaf coreopsis, wild strawberry, lupines, and dotted blazing star were inserted into the pre-grown sedum mats that make up the base of the green roof. Some prairie seed was scattered as well.

The many different kinds of sedum in the mats create a ground cover of green, yellow and red hues all season long. The mature sedum created a ready-made home for the native plants and Shanstrom and her team were grateful to have that early support for plants trying to establish themselves in a hostile environment.

Though few plants have failed on the roof, those in one small spot do succumb to the elements or die off for unknown reasons every now and then. When that happens, sedum is cut off and scattered around so it can reroot. Native plants and seeds are also added from time to time. Weeds are pulled and occasionally sprayed by Stock Roofing, which has a contract through Tecta America to maintain the roof for twenty years.

Among the plant casualties, the death of the lupines was most lamented by researchers. Shanstrom isn’t sure why the plants didn’t do well, but their death was a disappointment to those hoping to learn more about the endangered Karner Blue butterfly, which relies on lupines for survival. “Now that that project is over, no one else is doing any wildlife research because of a lack of funding,” says Shanstrom. “It’s too bad because it would be a fascinating thing to do.”

Meleah Maynard’s last article for The Line was a portrait of the design and marketing firm Kick. This article is reprinted in partnership with The Line, an online chronicle of Twin Cities creativity in entrepreneurship, culture, retail, placemaking, the arts, and other elements of the new creative economy.

Target Center’s green roof: a prairie in the sky