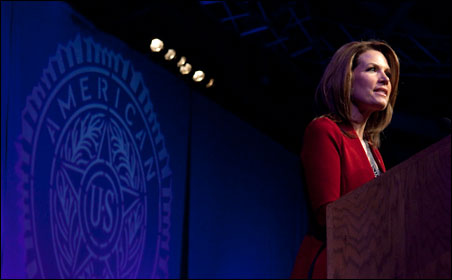 MinnPost photo by Terry Gydesen
Michele Bachmann spoke Thursday to the American Legion, comparing herself to such past conservative leaders as Margaret Thatcher and Ronald Reagan.

Bachmann, speaking to delegates at the American Legion national convention in Minneapolis, clearly was attempting to compare herself to the former president and prime minister. She spoke of how the two “defeated the Soviet Union without firing a shot.”

According to reporters who have followed Bachmann’s campaigning for president, the references to Thatcher were new.

Could it be she was attempting to show that a woman can be just as strong, just as conservative, as a man?

Bachmann deflects questions
Bachmann wasn’t talking about the Thatcher references after her speech. In fact, her staffers attempted to keep reporters from the candidate after the speech.

“Why?” a reporter asked.

“We don’t have time,” another staffer said. “No questions.”

Reporters, however, kept firing away as Bachmann, surrounded by staff, made her way from the podium to a curtained “green room” behind the podium.

Bachmann finally did relent, for just a moment.

“We’re in similar times, and they were similar leaders,” she said of her references to Reagan and Thatcher.

Is she the new Thatcher? In her speech, Bachmann had said, “We find ourselves in search of another Margaret Thatcher.”

But she didn’t answer the question. Instead, she ducked behind the curtains, where she greeted a handful of Legionnaires and conducted an interview with a reporter from an American Legion publication.

The “unruly mob” of local reporters still didn’t leave – until a handful of Legion members arrived.

“Go back to where you belong,” said a man who was wearing an armband that showed he was an assistant sergeant at arms. “This area’s off limits.”

A warm reception
Bachmann’s speech was warmly received by delegates. Although there weren’t nearly as many delegates in the hall as there’d been Tuesday when President Obama addressed the convention, there did seem to be more enthusiasm for what she said.

The crowd especially responded to her comments on federal health care reform.

“Repealing Obama care,” she said is priority No. 1. “It will have terrible consequences for you, our veterans.”

The cheers were loud and long.

This was more a campaign speech than a speech to the Legion.

“I promise you I will lead, not from behind, but I will lead from the front,” she said. 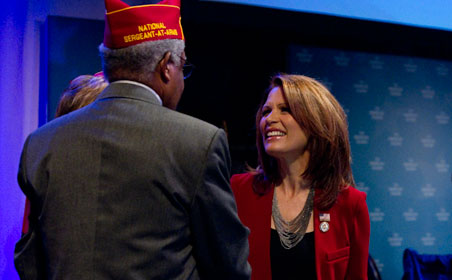 MinnPost photo by Terry Gydesen
Unlike the warm, polite receptions by the crowd for president Obama and Nancy Pelosi, Bachmann was cheered loudly by the delegates.

She was critical of the congressional “super committee” that has been appointed by leaders to wrestle with the national debt.

“The Super Committee is one of the worst ideas I have ever seen in our country,” she said, adding that the committee might cut more than a half-trillion dollars from the defense department budget. In the same speech, however, she called the nation’s debt is a terrible crisis.

To applause, she said that the national debt must be erased. But at the same time, she vowed that benefits to veterans would not be cut under her watch.

She decried “scare tactics” in Washington but then said some pretty scary stuff herself.

The threat of government shutdowns have included threats that veterans benefits and paychecks to active military personnel would not be paid in the event of a shutdown.

“As president, I want to assure you, our armed services will never again be pawns in deal-making in Washington, D.C.,” she said. “Serving you doesn’t have to be complex, it just has to be done.” Again, big applause for Minnesota’s 6th District congresswoman.

But what was new here were the references to Thatcher along with Reagan in the 1980s. She talked of Great Britain’s military triumph in the Falkland Islands and of how the Iran hostages came home when Reagan became president.

Delegate reaction
What did delegates think of Bachmann? The delegates from Texas – home, of course, to Gov. Rick Perry, who has seemed to cut heavily into Bachmann’s base — gave her high marks, but with reservations.

“In my opinion, she hit the right notes,” said Paul Dillard, who lives near Fort Worth. “But I would have to say I’m leaning a different direction.”

Dillard nodded in the affirmative. “But I did like her speech,” Dillard continued. “We’ve got to get the handle on the deficit. We have to stop. What I’ve started doing is vote against incumbents. I hope others do the same until they get the message. But what I really liked about her speech was what she said about Obama-care. If we don’t get that repealed, we’re tattooed.”

Was Dillard surprised to hear all the Thatcher references? “I noticed that,” he said. “I was a little surprised.”

Indeed she was. She referred to the high unemployment rate among vets and said the response to that is that “we have to start making stuff in this country again.”

Her thoughts on the war in Afghanistan were different from the president’s.

On Tuesday, Obama had said that the United States will leave Afghanistan “responsibly.”

But she also said that, as commander in chief, “we must never put our troops in harm’s way without an end plan, without knowing our mission.”

This, too, was a line that drew affirmation from the crowd. Over and over, she insisted that under her leadership, there would be improvements to benefits and that returning vets would be accorded “the welcome they have earned.”

But even as she spoke, an organization called Minnesotans for a Fair Economy emailed a release to the media claiming that Bachmann’s congressional record has been harmful to vets. It noted that returning vets face higher unemployment levels than the population as a whole and that Bachmann has opposed bills authorizing extensions of unemployment benefits.

Bachmann was the final pol to make a speech on the convention’s last day. It ended with a marching band parading through the hall as red, white and blue balloons came down from the rafters and the naming of a new commander, Fang A. Wong, the first Asian-American to lead the organization.

Is Bachmann positioning herself as ‘the new Margaret Thatcher’ with American Legion speech?