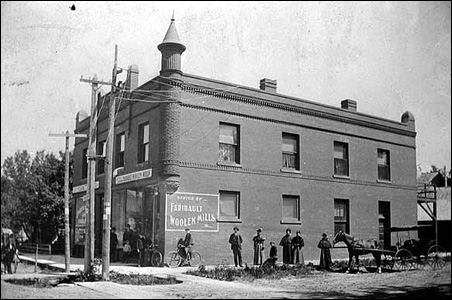 Courtesy of the Minnesota Historical Society
The office of Faribault Woolen Mills ca. 1897

New businesses open often, even in these troubling times.

But the grand opening of the Faribault Woolen Mill factory today, to be marked by a ribbon-cutting visit from Gov. Mark Dayton, is something special.

Chuck Mooty, the reborn company’s CEO, says the mill is the state’s oldest manufacturer. It began operating in 1865, the year the Civil War ended, and was closed in July of 2009.

Mooty says the rebirth of the mill is representative of a trend to bring back to the U.S. work that has been outsourced in recent decades to producers overseas.

Workers at the mill will be resurrecting one of the state’s best-known products, “Faribo” woolen blankets and throws.

Asked why he thinks a new ownership can succeed when other recent owners have failed, Mooty said that “with proper management and financial controls, the time is right for a nostalgic and legendary domestic brand to be rekindled.”

“We will focus on quality positioning and the relevance and support for domestic product. The environment has changed in the last two years, with consumers being more devoted to U.S. brands and product, and the cost of importation and the inconsistency of overseas supply play well for our cause.

“The spike in other classic American brands make us feel more confident.”

In an intriguing twist, workers at the mill will produce blankets and throws made partly from Ingeo, a biodegradable resin made from corn. The resin, which comes from Cargill’s NatureWorks plant in Blair, Neb., continues to find its way into more and more familiar products around the world — everything from baby clothes and candy wrappers to salad shakers and drinking cups.

A family businessingoe
Mooty was the CEO at International Dairy Queen, part of the Berkshire Hathaway empire built by legendary investor Warren Buffett, from 2001 to 2008.

The mill is rebooting with a work force of about 30. Seventy percent of them have worked at the mill in the past. Mooty thinks there could be enough work for 40 to 50 employees by the end of the year.

The revival at Faribault serves up another reminder of the still-significant Minnesota’s manufacturing sector, where employment has been edging up after a long, steep decline that hit bottom early last year.

“It’s just such a key segment for us as a country,” Mooty says.

Mill is one of a kind
According to Mooty, the Faribault factory is the only woolen mill in the U.S. to have its production “fully integrated” at its plant instead of having some of the work outsourced abroad. All-Faribault production makes more economic sense today than depending on workers from abroad to handle some of the work, he says.

Workers at the mill are chasing after customers again, taking online orders for products touted on the company’s website. Two hotels in New York City, the famed Waldorf Astoria and the Hudson, a boutique hotel that is part of the Morgans hotel group, have signed up.

But then the business turned sour. It was sold in 2001, ending 136 years of ownership by founder and German immigrant Carl Klemer and successors from his family.

Earlier this year, the company acquired the mill’s equipment, technology and inventory from Gibbs International, a South Carolina-based liquidator. For now, Mooty is leasing the plant, but he hopes to close a deal to buy it by November.

Mooty won’t say how soon he hopes the business will become profitable, nor would he comment on expected sales.

Making blankets from corn
Cargill’s corn-based resin was being blended with wool to make blankets at the mill before it was shut down, Mooty says, but improvements in the process could lead to better quality as time goes on.

Dow Chemical and Cargill commercialized the resin in a joint venture, NatureWorks, after Patrick Gruber piled up a stack of patents for the process. Gruber, who grew up in St. Paul, earned a doctorate in biological chemistry from the University of Minnesota. In 1988, Cargill hired him to do the research that led to the resin. Today, he is the CEO at Gebo, a Colorado startup that develops renewable energy technologies.

In an interview, Gruber said products using the resin continue to proliferate. “You find them everywhere,” he said.

Cargill eventually bought out Dow’s stake in the venture. Now it operates NatureWorks as an independent, wholly owned subsidiary that makes and sells renewable products competing with petroleum-based packaging materials and fibers.

In an email, NatureWorks President and CEO Marc Verbruggen said the company expanded  resin capacity at its Nebraska plant in 2009, will gradually boost it more over the next 15 months and plans to build a second resin plant to be in production by 2015.

Dave Beal can be reached at dandcbeal[at]msn.com.