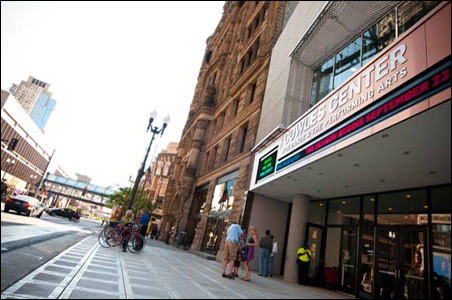 There’s always something happening on Hennepin Avenue. The wide, lively downtown Minneapolis boulevard has long specialized in entertainment, from the funky to the family-friendly to the high-cultural. It’s also had its share of development woes. Now it’s slated to be part of an ambitious project that will link it closely with the Walker Art Center at one end and the bustling redeveloped riverfront at the other. The method? Placemaking, with an accent on the arts.

In July, the National Endowment for the Arts announced the recipients of its new “Our Town” grants to 51 communities in 34 states. Otherwise known as the “creative placemaking” grants, the Our Town funds were awarded to organizations that have “created public-private partnerships to strengthen the arts while shaping the social, physical, and economic characters of their neighborhoods, towns, cities, and regions.”

Among the recipients is the Hennepin Theatre Trust, which received $200,000 in support of a one-year planning process to “re-invent Hennepin Avenue as an arts-inspired cultural corridor stretching from the Walker Art Center and Minneapolis Sculpture Garden to the Mississippi Riverfront.” On Sept. 9, that planning process began with a lively panel discussion in front of a standing-room-only audience at the Minneapolis Central Library.

Discussion of the potential for a “Hennepin Avenue Cultural Corridor” began with a definition of “creative placemaking” taken from a new report by Ann Markusen (Markusen Economic Research Services) and Anne Gadwa (Metris Arts Consulting): Creative Placemaking (a white paper for The Mayors’ Institute on City Design, a leadership initiative of the National Endowment for the Arts in partnership with the United States Conference of Mayors and American Architectural Foundation):

“In creative placemaking, partners from public, private, non-profit, and community sectors strategically shape the physical and social character of a neighborhood, town, city, or region around arts and cultural activities. Creative placemaking animates public and private spaces, rejuvenates structures and streetscapes, improves local business viability and public safety, and brings diverse people together to celebrate, inspire, and be inspired.”

With a focus on “arts and cultural activities” as an agreed upon touchstone for the discussion—given that such institutions as the Minneapolis Public Library, just-opened Cowles Center for Dance and the Performing Arts, historic State, Orpheum and Pantages theaters, and the Walker Art Center reside on the avenue — the panel kicked off with Landesman reiterating what most in the audience already knew: “When you bring art and artists into a place, they change it profoundly for the better.” He added that, “Where there’s an arts presence, there is greater civic engagement, and lower rates of truancy, poverty, and juvenile delinquency.”

That theme was reiterated by the other panelists, with Harris interjecting that in an age of social media, with more people connecting via cyberspace, “the arts make people feel special about a place and provide a way for people to be together.” Art, in other words, is the glue.

Out of the Box, into the Streets

Her comments, in turn, provided one theme for the discussion: Taking the arts “out of the box” or institution — to make the often intimidating walls of an arts institution more permeable and inviting–and thinking of the street as a medium or venue for artmaking to occur.

So how should Hennepin Avenue’s arts institutions connect with each other and the street? Fisher asked. Borrup proposed a three-pronged plan: physical connections through urban planning, organization-led arts activities, and marketing/branding. How else might the new cultural corridor engage people? Food and art making, Harris answered, as both “make people feel comfortable.” Added Borrup: “Food, music and kids.” Global Market at Midtown Exchange was often cited as Twin Cities placemaking at its best. And Rybak’s reminder that “Minneapolis is a city within a park,” drew murmurs of appreciation from the crowd.

Pedestrian Planning by a Choreographer?

When Fisher asked how the project should engage cultural creatives, such as the talent within the room, in the corridor’s placemaking, the discussion came alive.

Why couldn’t our traffic and pedestrian planning be done with a choreographer? Borrup asked. Why couldn’t landscape architects become more involved in lighting? Rybak asked. Pop-up galleries, food trucks, getting people out of their silos and working together across disciplines and expertise were suggested. “What if we really embraced Hennepin Avenue as a theater of seasons?” Rybak asked, with more winter activities like the City of Lake Loppet.

From the Audience: Class, Race, Culture

After a final question about how the panelists envisioned the corridor if the project is achieved (the consensus: activities that keep the corridor buzzing 24/7 and welcome everyone), Fisher turned to the audience for input. Immediately Jeff Hnilicka, executive director of Kulture Klub Collaborative, raised a critical question: Who are the gatekeepers for class and race, arts and culture during a planning process run by several large institutions? At that point, the lack of diversity both in the audience and on the panel was acutely obvious.

Wendy Morris, a creative pioneer in leadership development, followed up (after the question went unanswered) with the same question, but reframed. What are the opportunities for a co-creative planning process, she asked, and how will that process be reflected in the final outcome? Artist Ta-coumba Aiken poetically called for inviting people in, constantly reaching out and pulling in, tossing the rock in the water and catching the ripples.

Jack Becker, executive director of Forecast Public Art, suggested getting artists involved from the start in planning, and turning the struggling Block E development into artists’ studios “to demonstrate how art engages people.” Artist Sylvia Secrest “beseeched” the panel to “keep the tawdriness and naughtiness” of Hennepin Avenue.

Amid the laughter, enthusiasm, and congratulatory flattery (“We’ve stolen our playbook from Minneapolis,” Landesman said of the creative placemaking initiative, and “everyone knows Minneapolis is an arts city. Where else is arts support embedded in the state constitution?”), one fundamental concern was clear: the need for a planning paradigm predicated on artist, resident, and community inclusivity and diversity in a process being led by institutional directors Tom Hoch (Hennepin Theatre Trust), Olga Viso (Walker Art Center) and Kelley Lindquist (Artspace).

Hoch reminded the audience that the kick-off panel was just that: A way to solicit input for a planning grant. But the sense in room, as people dispersed, was also that Tom Borrup, as the project director, is the man for the job.

As presenters and audience left the library, they returned to the sidewalk of Hennepin — an avenue with a vivid, racy past, a present in transition, and, if all goes well, a brand-new future.

This article is reprinted in partnership with The Line, an online chronicle of Twin Cities creativity in entrepreneurship, culture, retail, placemaking, the arts, and other elements of the new creative economy. Camille LeFevre’s last piece for The Line was a Q and A with visiting artist/activist Marc Bamuthi Joseph.

Placemaking/Minneapolis: The arts take the lead on Hennepin