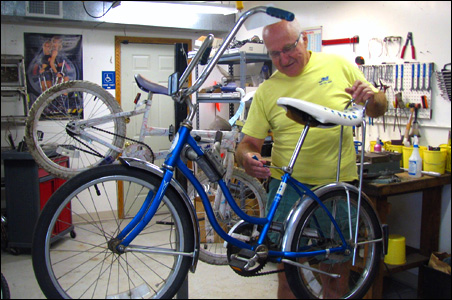 MinnPost photo by Joe Kimball
Jim Muellner, an entrepreneur who scored big with the Smarte Carte luggage carrier, fixes bikes and donates them to kids in the East Metro.

Jim Muellner of White Bear Lake is the engineering wiz and inveterate tinkerer who brought those Smarte Carte luggage carts to darn near every big airport in the world: Tokyo, Singapore, LAX, Terminals 1 and 2 at MSP — almost everywhere.

He sold that business almost 20 years ago — great timing, because wheeled luggage was about to become popular. Then he began a business making and selling side-by-side recumbent bikes.

As part of that endeavor, he’s become an evangelist for the bicycling world, showing up to ride in parades and organizing an annual bike ride for parents and children.

And now he’s become a bike philanthropist, too, fixing up and donating bikes to families and children in the East Metro area who really need them.

This summer, he connected with several agencies who help needy families, recruited some folks with mechanical know-how (or at least a desire to help) and began refurbishing bikes.

He gets names of those needing bikes from the agencies, along with the height and weight of the recipient, and then picks out a two-wheeler that will fit from his stock inside a Hugo workshop.

The bike is adjusted, cleaned and sized, then fitted with a water bottle and a helmet. He often ties a Beanie Baby onto the bikes for young girls; he calls it a “human touch.” (His wife, Marilyn, was going to sell her stash of the once-trendy little dolls, but Muellner told her: “I’ve got an idea how to use them.”)

“When the bikes go out of here, they look pretty good, all shiny and clean,” Muellner said. “We want it to seem like they’re getting a great new bike.”

Happy bikers
The bikes have been a godsend, said Kellie Cardinal of St. Andrew’s Lutheran Church in Mahtomedi, which has both collected old bikes to be fixed up by Muellner — and received more than 100 of them back, looking good as new, to be distributed to families and kids in need.

Sometimes Muellner delivers them on Thursday night during the church’s free community meal. Kids who’ve signed up in advance can’t wait for the truck to pull up.

“The kids come running and skipping and hopping to go get their bikes,” said Cardinal, the director of local missions and outreach at St. Andrew’s. “It’s such a great scene. Then other kids find out and sign up, and a couple weeks later, they get their bikes.”

Some adults and teens also have gotten bikes through the program to help them get to work, she said.

“The need for transportation is huge up here [in the northeast suburbs] because there isn’t good bus service,” Cardinal said. “Several people have gotten jobs, or been able to keep their jobs, because of bikes they’ve received through Jim.”

She said several times she’s seen whole families out riding the bikes they’ve received through the program. “And I’m thinking: ‘Yes!’ Otherwise they wouldn’t have that opportunity.”

Cardinal and Muellner tell of one 6-year-old boy, who was having a birthday.

His mom was struggling and arranged to have the boy’s birthday party at the church’s free Thursday evening meal. Another family made a cake. The boy said all he wanted was a bike, but his mom couldn’t afford it. Cardinal told Muellner, who picked one out and fixed it up.

“I brought it to the church and found a big cardboard box and set the bike inside it,” Muellner said. It had a helmet and a water bottle, and a Beanie Baby.

“When he opened the bike, he didn’t jump up and down like you’d expect,” Cardinal said. “It was like he was in shock. He didn’t know how to react.”

The East Metro Women’s Council in White Bear Lake gets some of the bikes, too, for children and families.

“We’ve received lots and lots of bikes, including two for twin sisters Rickea and Ricala, and bikes for some of the moms, too. It’s wonderful to see them have some freedom to get around,” said Cheryl Schindler, the council’s volunteer program director. 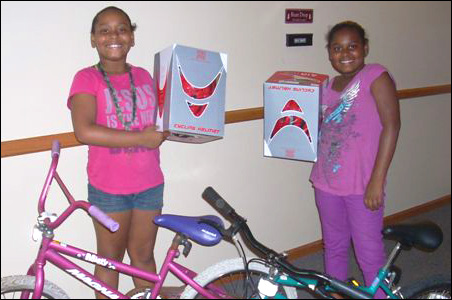 Photo courtesy of Metro Women’s Council
Sisters Rickea, left, and Ricala with their bikes and helmets.

“Our parking lot was graced with exuberant smiles and boisterous laughter this summer, thanks to Jim. For some of our residents this is their only form of transportation. They are so proud riding their own bikes.”

Muellner has lots of other projects in the works, too, and sometimes is out of town for stretches.

Bicycle built for two
Muellner, who’s 75, bought the Smarte Carte business in 1969 and took it international. He’s the kind of guy who likes to stay busy, so after he sold the business in 1993, he went on a bike ride across the state with his sister, Alice.

Along the route, he had trouble matching her speed, he said.

So he spent the next year tinkering and showed up at the next year’s ride with a hand-made side-by-side recumbent bike, so they’d be truly able to ride together. From that, his current business was born. They do repairs on regular bikes at the shop, too.

Help needed
Muellner and the local agencies said there’s still a great demand for bikes to be used by kids and families who can’t afford them, so Muellner plans to work on the project through the winter so he’s ready in the spring when the kids want to get back on the road.

He takes donations, too, to buy helmets and pay for some of the parts needed to fix the bikes. He also sells some used bikes at his shop, 4701 Banning Ave., in downtown White Bear Lake, and uses the proceeds for the bike donation program.

He’s looking for used bikes in good shape that can be tuned up and shined up for the kids. He’s also looking for volunteers who can work a few hours a week on the project. He can be contacted by email at info[at]justtwobikes.com at 651-426-1548.

And Cardinal, at St. Andrew’s Church, said there’s a need for some storage space to keep used bikes that are donated for the program. They’ve been using a classroom for storage all summer, but need to free up the room for Bible classes, she said. Her email is kcardinal[at]saintandrews.org.