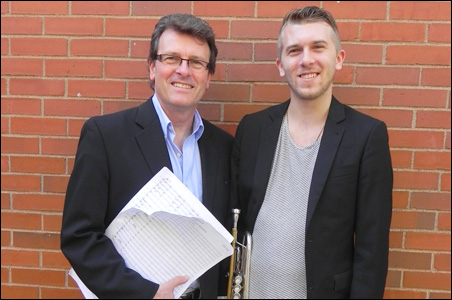 Fathers and sons might go fishing together or throw a Frisbee around in the back yard. But we seldom hear of Dad and Junior collaborating on a piece of music — a pop song, perhaps, but not a big piece of concert music. It’s so rare that, when asked to name a few musical father-son teams from the past, Stephen Paulus, a prominent composer who lives in St. Paul, drew a blank, as did his son, Greg. Yet “TimePiece,” for Jazz Soloists and Orchestra, a large-scale work by the two of them, will be premiered by the Minnesota Orchestra tonight in the opening program of the orchestra’s 109th season.

“Two of the Bachs might have done it — C.P.E and Emmanuel or one of those,” said the elder Paulus. “If it happens, the two of them are working in the same genre. It comes from the trunk of the same tree. You don’t find a son who’s a rocker collaborating with a father who writes string quartets in the style of Elliott Carter. Greg and I have different styles, but I think we’re pretty compatible. Don’t you?” he said, pointing the question at Greg. “What kind of magazine would we be on the cover of?”

Stephen added, “Yeah, and it would be only two pages long.”

Compatible, yes, and beyond that, it’s obvious as they sat and talked in the living room of Stephen’s home in St. Paul that this particular father and son enjoy each other’s company, even though they inhabit different musical worlds.

At 62, the elder Paulus — with more than 400 compositions to his credit, including 10 operas — is one of the nation’s most honored and prolific composers. If he represents contemporary classical music, Greg, 27, trained as a jazz trumpeter at the Manhattan School of Music and living now in Brooklyn, N.Y., tours with an electronic production team called No Regular Play while playing trumpet and keyboards with the electronic avant-pop artist Matthew Dear.

Greg will appear as one of the soloists in “TimePiece.” He identifies himself these days less as a jazz musician than as a producer/player who also composes music in the area of what he calls “compositionally driven” electronic dance music or “house music,” what in an earlier day would have been called “vernacular” styles as opposed to the “serious” or “cultivated” or “classical” tradition that his father represents. Today, however — and refreshingly so — these categories are not so firm or clear-cut. Much of pop music is quite serious — and always was — and surely we’ve all heard so-called classical music that’s downright frivolous.

Three genres in the piece
Stylistically, said Stephen, “there are really three genres in this piece: classical symphonic, jazz and electronic, and it all kind of merges together.”

It was Greg who got the ball rolling a few years ago when he mentioned casually to his father that they ought to collaborate on a piece of music sometime. In 2007 Stephen talked to music director Osmo Vänskä during an intermission at Orchestra Hall. He recalled, “I said to Osmo, ‘What do you think about some kind of jazz concerto for a small group and orchestra?’ And I added that maybe it would be a collaboration with Greg. Osmo said, ‘That’s exactly what the orchestra needs.’ “

There was an extra connection. Paulus knew that Vänskä plays jazz clarinet from time to time along with his Brahms and Beethoven; moreover, he recorded a jazz CD some years ago with his orchestra in Lahti. Paulus: “I thought, ‘Here’s our man. He isn’t the kind of maestro who says, ‘We can’t have jazz in the concert hall.’ ” And indeed, tonight (and in subsequent performances Friday and Saturday) Vänskä will turn around at the podium during the third movement, “Anxiety’s Edge,” and play a solo.

For about a year, the Pauluses simply thought about the piece while continuing to work on their own projects.

“Then we started throwing around ideas at the piano and came up with a structural diagram,” said Greg. “And we did a lot of talking. At the time I was doing a lot of electronic music, more dance-oriented stuff, sort of new underground, and I had this one track I had made with a friend from high school called “Rain (all day).” It incorporates field recordings I had made, like trucks going through puddles in front of our house. It used a synthesizer, but I’d always thought the piece could better be fleshed out as an orchestral thing. So then out of the blue, my dad called me and said he had been listening to the same piece on a private CD I had made.”

“I loved the energy of it,” said Stephen. “I thought it would be cool if you could capture that rhythm with an orchestra — a big tsunami of sonic titillation. It’s a bit like Ravel’s ‘Bolero,’ which is on the same program. It starts with the orchestra being barely perceived, then just grows and grows.”

Collaboration via Skype
They finished “TimePiece,” all 30 or so minutes of it, in July of this year. Greg was on the road during the final months of composition, so father and son communicated via Skype, the video phone system. “I’d call him and say I need help with this chord, and I’d be playing it on the piano,” Stephen said.

Greg figures he spends about 90 percent of his time these days on the road. He says, ruefully, “I guess you could say I tour all the time in order to make enough money to pay the rent on a house I never have time to live in because I’m touring all the time.” His first obsession in music was jazz. He started playing trumpet at 12. At 14 he announced to his father that he wanted to go to New York and make music. Stephen remembers saying, “You know, music isn’t a great career.”

“I was busy writing something and was being dismissive. But then I realized he was serious, so I said, ‘It takes a lot of passion, and there’s a lot of competition, and many times you’ll think you did a great job but nobody agrees with you, and a lot of times your only payment is a baloney sandwich on the loading dock. But I’ll help you to the best of my abilities. I’ve gone into a different part of the business, but music is music, and these days it’s all kind of blending together anyway. As long as you do it well, it doesn’t matter whether it’s minimalist or 12-tone or whatever.”

Greg considers his years at the Manhattan School is a positive light, and it wasn’t just school he benefited from. He managed to play in jazz clubs around the city with the likes of established jazz trumpeters like Roy Hargrove.

“When I got to New York, my ears really opened up,” he said. “I got into be-bop and Miles and electronic music, and then I really got into hip-hop and house and dance music. I went to these late-night parties, and they’d be playing this really cool music using samples of old jazz and new stuff, too.”

More to music than solos
Eventually, he soured on jazz and the jazz world. “The whole system, it seems to me, doesn’t work,” he said. “If I want to put out a record, it’s going to take five years, and it’s probably not going to come out the way I want it, and it’s not going to go anywhere. I’ll be sitting there with my CDs wondering what the hell’s next. So I began to look for new styles of music where I could be more fulfilled. I also started to think that maybe there’s more to music than just taking solos. At the same time, I became extremely inspired by his music,” he said, gesturing toward his father.

“And I thought, ‘Oh, that’s the goal for me: composition.’ In jazz, you play a solo, but if it wasn’t recorded you’ll never hear it again, whereas with composition I can sit down for three hours and get something I can listen to for the rest of my life. And I also think it’s more fulfilling to make intelligent music that transcends genres, and I think that’s what this piece does,” he said, referring to “TimePiece.”

All this, of course, shatters the cliché of the generation gap, which would say that Greg thinks his father and his music are hopelessly square, while Stephen thinks Greg writes chaotic music and is only interested in tearing down valuable traditions.

Both laughed. “That’s totally not the case at all,” said Greg. “And I think his stuff is terrific,” said Stephen.

Osmo Vanska conducts the Minnesota Orchestra in the premiere of “TimePiece” for Jazz Soloists and Orchestra, along with works by Ravel, Antheil and John Adams as the opening program of the orchestra’s 109th season. 7:30 tonight; 8 p.m. Friday and Saturday. Orchestra Hall, 11th St. and Nicollet, Minneapolis. Tickets: $26-$84. 612-371-5656.