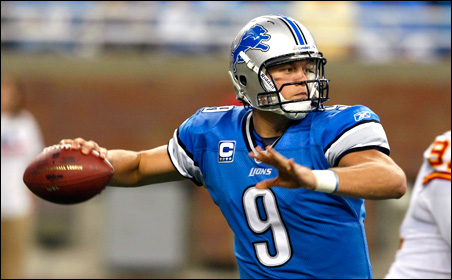 REUTERS/Rebecca Cook
Quarterback Matthew Stafford has been a key in the Lions’ turnaround.

For years now, the Sunday afternoon routine has been the same. I would go with some friends to my favorite saloon to watch the Viking game. I consider myself a somewhat casual NFL fan because the team I grew up on — the Detroit Lions — generally moved to the back of the pack early in the season and stayed there, unwatched and undiscussed by my pals in the saloon … and the rest of the football fans for another season.

Twice a year, I bravely show up to take my comeuppance from my comrades. I would watch hopefully as the Lions usually stake themselves to an early advantage … only to see misfortune occur in the second half and another loss go in the books.

It happens in all sorts of interesting manners. The years become blurs. But the games stick out. I remember one where the Lions, trailing by seven points, scored a TD in the last minute. Overtime seemed imminent … until the extra point was missed.

Twice, I manned up and came to Lion games in person here. One of them was at Met Stadium on a chilly November afternoon in the 1970s. The Lions actually played toe to toe with the Vikings that day. They put on a nice drive at the end. They lined up for a potential game-winning field goal. I was sitting in the upper deck in left field and was poised to shout with the glee. The ball was snapped and the reliable Errol Mann strolled forward and kicked the hell out of the ball. It rose in the air straight for the goalposts … until somebody in a purple jersey jumped into the sky and batted the ball to the ground.

It was 30 years before I was willing to try it again. This time, we went to the Metrodome and sat in a corner near an end zone. I winked anxiously at some fellow Lion fans sitting nearby. Then some Viking ran a kickoff for a touchdown and the rout was on. I don’t remember the final score but it was a lot for the Vikings to not very much for the Honolulu Blue and Silver.

And so it went.

Finally, last year a change
But things seemed to be changing last year. The Lions scored a rare win over the Vikings in Detroit. By the end of the season, both teams had the same record: 6-10. The difference was Vikings’ fans had their heads in their hands while we Lions types were opening the vintage champagne bottles. Detroit was awarded third place in the division based on having a better record than the Vikings against divisional foes.

Never did 2-4 (the divisional mark) look so good.

If only Matthew Stafford could stay healthy, we Lion types thought. We have a great wide receiver in Calvin Johnson and a killer man-child of a defensive lineman in this Suh dude. The little 54-year slump that produced the grand total of one playoff win might finally end.

Then the word came out the NFL was on strike. The ultimate blow. It was as if the rest of the league had said, “There’s a limit to what we can handle. Having Detroit as a team to watch and (possibly) admire is a line in the sand that even Pete Rozelle would not have crossed.”

Mirable dictu, though, the strike was settled and the games began. I didn’t think much of my guys (they’re my guys now) going 4-0 in preseason. After all, they also did this just a couple of years ago, too … and then went 0-16 in the regular season.

Accordingly, I held my breath when they opened the season in Florida. I remembered all those times the Vikings went down to Tampa, full of vigor and enthusiasm only to get spanked by the Bucs in the September heat.

But Detroit played a solid game and won. When they came home to play Kansas City last Sunday, I was working outside in an area that didn’t have TV or Internet service. I waited as long as I could and then texted a fellow Lionite.

No response. Some things are better left unknown.

On to this week. The Lions are actually favored to win in the Metrodome Sunday. They appear to be a team on the rise, and the Vikings … well … they look like a team I know all too well.

I debated going in person to revel in triumph at the Dome but decided I am better off watching in my usual saloon. Should my guys win, I will be among friends who (I hope) will understand if I crow a bit. Should they lose, well, I can still brag about that one-game lead in the division.

Besides, there is always next week. The roar has been restored … I think.