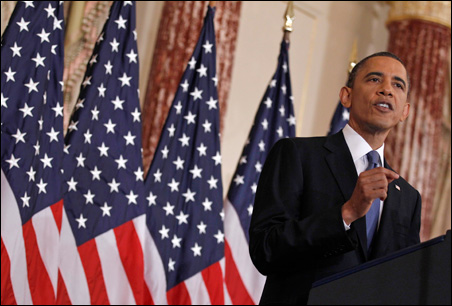 Unemployment remains high because the U.S. economy’s growth rate is far below its long-run trend of 3 percent a year. Today’s over-extended consumers cannot bring the economy back to its potential output level because they are burdened with mortgages they struggle to pay and other debts. Households and businesses, uncertain about the future, want to hold safe assets such as cash and government bonds.

Is there a remedy? Is there a set of policy prescriptions President Obama, who addresses Congress tonight, should follow to reinvigorate the economy, lower unemployment and set the foundation for future growth?

I’m not saying this will happen in today’s political climate, just that it should as a matter of good economic policy. And if a strategy of borrowing and reducing the deficit sounds like a contradiction, it’s not. Here’s why:

Why borrow more?
The federal government should issue long-term bonds and invest the proceeds in projects that will have the immediate effect of creating jobs and producing long-term growth. The federal government can currently borrow funds at 2 percent for 10 years and 3.25 percent for 30 years.  Economic reasoning tells us that, at the margin, borrowing makes sense if the marginal cost of funds is less than the marginal benefits we receive by investing these funds.

So, for example, Rob Grunewald and Art Rolnick of the Minneapolis Federal Reserve Bank report that investments in early childhood health and education range from $4 to $16 for every $1 invested in these programs. A bonding program that focused on scaling up existing programs would create job opportunities now and benefit the economy in the long-run by increasing the stock of human capital.

Another good candidate for public investment is the Fix America’s Schools Today (FAST) program proposed by the 21st Century School Fund and the Economic Policy Institute.  Currently, public schools face about $500 billion of deferred maintenance and repairs. The FAST program would allocate $50 billion to begin chipping away these projects.

There are a host of other infrastructure projects that could be considered: port and rail improvements to enhance the ability of U.S. firms to export their products; broadband expansion in small towns and rural areas; upgrading and repair of wastewater systems. Any and all of these would surely have a payoff greater than 3.25 percent in the long run, and would put people to work in the next six to 18 months.

An additional benefit of this plan of action is that it will meet the demand by households and firms for safe assets. Businesses, for example, are sitting on roughly $1 trillion in cash rather than investing in new equipment or hiring more workers. If this is what they want to do, let them do so by exchanging their cash for safe government securities. We can then use this cash to invest in America’s future through targeted public spending on projects that promote employment and productivity.

The precedent for this policy is the U.S. experience during the Great Depression. Alexander J. Field, an economic historian at Santa Clara University, argues that public investment in the 1930s laid the foundations for the high rates of economic growth the United States experienced between 1946 and 1973. Field demonstrates that public investment such as road building put people to work during the 1930s and improved long-run productivity growth in manufacturing and distribution.

Family budgets vs. government budgets
Increased borrowing today may sound like a crazy idea. After all, don’t we have a large national debt already?  Yes, the current debt is quite large by any measure. But it’s important to keep one key fact in mind: the government budget is different than a family budget.

Suppose that a family is deciding whether or not they should take out a loan for a new computer.  The new machine would benefit the family, but it would not increase the family’s income stream. Thus, to pay for the new computer, the family would need to spend less on other items in order to pay off the loan from the same income stream.

The situation is different for a government. If, for example, the federal government invests in early childhood health and education, this will increase our stock of human capital and lead to higher levels of worker productivity. The result will be a larger income stream from which both the new debt and the existing debt can be financed.

The president can also reduce concerns about the current debt by coupling the proposal to borrow more today with a plan for servicing the current debt. He should start by announcing that he will allow all of the Bush-era tax cuts to expire. This will reduce future deficits by between 30 and 50 percent per year, according to the Congressional Budget Office.

The diagnosis of mainstream economics is that we need to stimulate the economy while dealing with the current debt and accommodating the desire of American households and businesses to hold safe assets. President Obama should propose new borrowing to fund public investments that will enhance our human and physical capital in the long run and, in the short run, get Americans back to work.

Louis Johnston is associate professor and chair of the Department of Economics at the College of Saint Benedict and Saint John’s University.