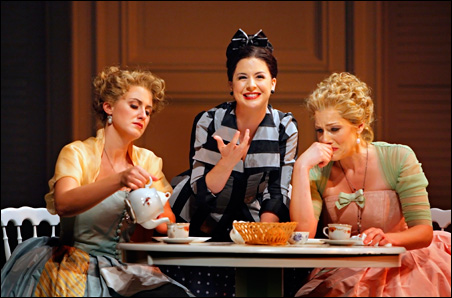 Photo by Michal Daniel
Jacquelyn Wagner as Fiordiligi, Angela Mortellaro as the sisters’ maid and Jennifer Holloway as Dorabella, in The Minnesota Opera’s Così fan tutte.

Attitudes shift, even in the world of opera. Mozart’s “Cosi fan tutte” (“All Women Are Like That”), which puts forth the notion that women can be just as unfaithful as men and that eternal fidelity may not be the natural state for any of us, was considered a “shocking and licentious work” during the moralistic 19th century. Today, the work seems realistic, witty and wise, a mix of tears and laughter, at once the broadest and most subtle of Mozart’s operas. In fact, it wouldn’t be totally out of place to think of “Cosi” as an operatic version of “Sex and the City,” the city in this case being Naples.

“Cosi” may also be, among Mozart’s operas, the greatest challenge to interpreters, especially stage directors. Here, in a tale by Lorenzo da Ponte, we have two young dudes who pretend to blow town, having bet an old “philosopher” that their girlfriends will be faithful if they come back in disguise and try to make love to each other’s woman. Surprise: They aren’t faithful, though they do feel just a teensy-weensy bit guilty about their betrayal. As the second act progresses, the characters undergo a process of growth and transformation — none of which they were expecting. The trick for the opera’s director is to keep these elements in balance. It can’t be all gags and slapstick because much of the music is so heartfelt, almost searing, and yet the tone must remain comic.

Peter Rothstein, whose staging of “Cosi” opened Minnesota Opera’s 49th season at the Ordway Center this past weekend — his first effort for this company — gets that balance just right most of the time. He treats the opera with respect. He dispenses with the customary sight-gags and pratfalls that give comic opera a bad name, letting the humor instead grow out of character. The Act 2 scene, for instance, where the two couples are nervously getting acquainted, as if on a first date, is one among several droll additions that Rothstein comes up with. A bonus in the comedy department comes from Angela Mortellaro, who gives us a foxy — rather than the usual earthy — version of Despina, the maid, displaying expert comic timing and a sweet soprano voice.

Rothstein’s chief conceit for the production is that Don Alfonso, our “philosopher,” acts as a stage manager who cues the events of the story, often from a position on a catwalk high above the stage, as if, like in a play, the events were all pre-determined, and in which he himself enacts the role of the Don. But the characters, except for the Don and his cohort, Despina, don’t know they’re in a play and, presumably, have no free will. This is in keeping with — another attitude shift — a darker view of the Don that has become common in opera productions in recent decades. No longer an amiable old cynic, the Don has turned in varying degrees sinister. Whereas in the famous Jonathan Miller production at the Opera Theater of St. Louis some years ago, the Don directed the action in the interests of science, as an experiment in human behavior, Rothstein’s Don is a manipulator of puppets who happen to be flesh and blood. All the world’s a stage, in other words. More cosmically, he’s like one of the gods of ancient Greece, directing the action on Earth from his catwalk on Mount Olympus. Only his motivation isn’t to gain scientific knowledge but simple amusement at the foibles of humans.

Heavy baggage, perhaps, for a comic opera. But Rothstein’s approach suggests a great deal while remaining entertaining. And there’s eye appeal, too. Alexander Dodge’s set, enhanced by Marcus Dilliard’s atmospheric lighting, is a three-sided series of panels that rise and drop and are adorned with classical motifs. (There is, however, that odd-looking tree that is moved about the stage in various scenes and doesn’t really belong there. Given that the characters end up learning a good deal about themselves, could this be the Tree of the Knowledge of Good and Evil that we’ve heard so much about in connection to the Garden of Eden?? Or is it just a shrub that a stagehand forgot to put backstage? We ponder these things.)

No particular time period is suggested, though Alejko Vietti’s bright costumes mix Mozart’s era with the Victorian period. And, happily, Rothstein’s cast is mostly terrific: five attractive young people, all fine actors and singers, plus Daniel Mobbs as the Don, a smooth, chilly trickster with a dark, weighty baritone. And the two sisters were terrific. Jacquelyn Wagner could well be one of the great Fiordiligis of our time — dignified, graceful and convincingly anguished at her betrayal of Guglielmo. And though it’s not a big voice, it projects and is firmly produced, and Wagner handled her two big numbers, “Come scoglio” and “Per pieta,” both of them endurance tests, with impressive ease and almost uncanny flexibility. (Rothstein surely erred, though, in having the character play cards with her sister during the first part of “Come scoglio,” a Baroque-style vengeance aria or at least a parody of one. Who plays cards when you’re plotting vengeance?) Wagner’s duets with Jennifer Holloway, who sang the role of Dorabella, the more volatile of the sisters, made a perfect blend, and Holloway’s warm mezzo made lovely sounds all evening.

In vocal terms, the two men made a less successful blend, partly because tenor John Tessier’s voice on opening night was strained in the upper register, though he achieved a convincing pathos in his aria near the end of Act I. Matthew Worth was a rightly stentorian egotist as Guglielmo and showed just the right voice for the part: dark and flexible. Conductor Christopher Franklin led a shrewdly paced reading of the score, probing emotional depths while encouraging excellent articulation from the orchestra and a strong sense of ensemble from everyone involved, which is the main clue to success in this opera.

And so what happens at the end? Do the young lovers go back to their original pairings? Directors over the years have provided at least three answers to that question. Rothstein’s solution is tricky, but a spoiler would have to be rotten to the core to spill the beans. You’ll have to see for yourself, in other words — or ask a friend who has seen this particular “Cosi” and slip him a ten. He’ll talk.