Republican Michele Bachmann versus Republican Chip Cravaack to hold onto a seat in the U.S. House?

It could happen, if the courts decide that a redistricting map created by the nonpartisan Citizens’ Redistricting Commission creates the sort of fair political boundaries Minnesotans should live with for the next decade.

The commission’s report and map (PDF) — released to the public this morning and to be given to a judicial panel that almost certainly will end up drawing the final lines — is substantially different from the plan created by the Republican-led Minnesota Legislature during the last session. That map, which lacked anything resembling bipartisan support in the Legislature, was vetoed by Gov. Mark Dayton.

Courts likely to have final word on redistricting
Assuming lawmakers fail to come up with a different plan that receives support of DFLers — a safe assumption — the courts will be obligated to create maps by late February that will determine who votes where and who runs against whom.

The 15 volunteers of the commission, who held 18 public hearings in the last couple of months, hope their map will give the courts a meaningful guideline. 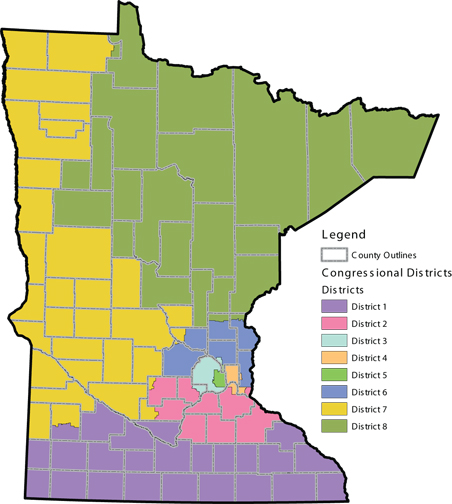 “Our work is done,” said Candi Walz, chairwoman of the commission. “It’s not a perfect map, but we think it’s a sound map.”

Of course, when pols of both major parties get their first looks at the maps, there almost certainly will be howls of protest.

Many of those protests may well be over the newly reformed 6th District, which has been the Bachmann district.

But under the commission’s proposal, Cravaack, who lives in the outer northern suburbs of the metro region, would move from the 8th to the 6th.

[Related: Redistricting plans: how they compare]

The commission’s thinking: Isanti County has more in common with Anoka County and the northern suburbs than it does with the Iron Range. So, St. Cloud, which has been part of the 6th, was moved into the 7th. Isanti County, meanwhile, was dropped from the 8th to the 6th.

Those decisions, Walz said, did not come without input at hearings.

What members of the commission were told, she said, was that people in and around St. Cloud felt they had more in common with the predominately rural 7th District. They also were told at other hearings that many felt the 6th “always has been the leftover district” that was merely slapped together with no regard to common interest.

Four principles
It was the job of the commission to come up with equal populations in each congressional and legislative district and wrap those districts around these four principles:

• Do not intentionally protect or defeat incumbents;

Look again at that 6th District boundary, as opposed to the one created by Republican legislators. Recall, they created something of a “Cravaack district, that would have moved him into a 7th District made up mostly of far northern suburbs and exurbs.

The 6th would have continued to include St. Cloud. The new 8th District would have stretched border-to-border across the top 25 percent of northern Minnesota, meaning Democratic Rep. Collin Peterson, long time 7th District congressman, would suddenly have found himself living in the 8th District.

Members of the commission understand the reality of politics — and the furor that could result if Cravaack and Bachmann actually did end up facing off.

Although Bachmann has not made clear her future plans beyond a fading presidential run, most expect that she will not choose to run again for the House.

There are other changes in the congressional map that presumably would seem substantial, at least to current officeholders.

For example, both the 4th and 5th Districts (seats currently held by Democrats Betty McCollum and Keith Ellison, respectively) needed higher population numbers for the required one-person, one-vote balance. Under this plan, the 4th grows by dropping south into such communities as Inver Grove Heights.

“People there work in St. Paul,” said Walz of why that change makes sense.

New boundaries for all legislative seats, too
Clearly, many of the state’s 201 legislators will find substantial changes proposed for their Senate and House districts.

But Walz repeatedly noted that those changes were based on results of population shifts, input gathered in public hearings, objective Geographical Information System data provided by the Humphrey School of Public Affairs..

There are no guarantees, of course, that the courts will use any of the work done by the commission.

But clearly the principles guiding the commission’s work are different from the principles used by pols when they attempt — and always fail — to create the maps that have so much to do with shaping Minnesota politics.

The motto of the commission showed how different its goals were from tkose of legislators: “Voters should pick their politicians, not the other way around.”

Related: Redistricting plans: how they compare

Bachmann vs. Cravaack? Matchup could happen under citizens’ redistricting plan