Could Pakistan, one of the scariest places on Earth, get even scarier? Could it become the world’s first nuclear-armed jihadist state?

That unsettling question, which poses a frightening scenario and is part of a policy-making puzzle that confronts both the U.S. and Pakistan, is being raised by John R. Schmidt, a 30-year veteran of the U.S Foreign Service and the author of a book published last month, “The Unraveling: Pakistan in the Age of Jihad.”

Schmidt, who now teaches at George Washington University’s Elliott School of International Affairs, was in the Twin Cities Thursday for a speaking engagement.

Book details growth of Islamic extremists there
Joanne Myers, director of public affairs programs for the Carnegie Council for Ethics in International Affairs, calls his book one of very few that describes well how Islamic extremists got established and grew in Pakistan and how they are destabilizing the country. Schmidt appeared at a Sept. 22 Carnegie forum.

Originally from Wisconsin, Schmidt holds bachelor’s and master’s degrees in philosophy from the University of Wisconsin at Madison and a master’s degree in national security from the National War College in Washington, D.C. He was a political counselor at the U.S. Embassy in Islamabad for three years.

In 1998, four days after he arrived in Pakistan, Al Qaeda operatives blew up two U.S. embassies in East Africa. His wife and two small children had 36 hours to pack up and fly back to Washington, where they remained for six months before returning to Islamabad. The embassy temporarily cut its staff from about 200 workers to about 50. Schmidt took a different route to work every day to minimize the danger that he would be attacked or kidnapped. 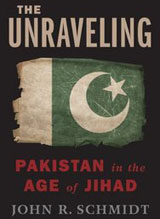 “I was devastated emotionally and fearful for my life,” he said in an interview Thursday.

Pakistan has had a rocky ride ever since it gained independence from the British Empire in 1947, with a particularly long slide setting in since Al Qaeda’s Sept. 11, 2001 attacks on New York City and the Pentagon. The attacks triggered U.S. military action in Afghanistan, which led terrorists to seek safety in the mountainous regions of Pakistan. In 2002, Daniel Pearl, the Wall Street Journal’s South Asia correspondent, was kidnapped in Karachi and then killed in a horrific act of terrorism.

Last May, U.S. Navy Seals found and killed al-Qaida founder Osama bin Laden. It turned out that he had been hiding out at a compound in Abbottabad, less than a mile from the military academy that serves as Pakistan’s West Point. The world was left to wonder whether Pakistan’s leaders, supposedly allies of the U.S. in its battle against al-Qaida, were giving bin Laden a safe haven. 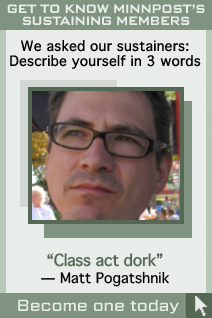 Economically, Pakistan’s gross domestic product per capita half a century ago was roughly equal to that of South Korea; today, it’s less than a tenth of that. Only 57 percent of Pakistanis can read or write. Just 2 percent of its people pay income taxes. Only 2 percent of its gross national product goes for education — the lowest in a region that includes poverty-stricken Bangladesh and Nepal, according to Schmidt.

Two groups run the country. One is the army, widely viewed as a meritocracy. The other is its civilian political class, dominated by wealthy landlords and industrialists who use political patronage to steer the country’s resources to themselves.

Yet despite these many travails, Pakistan has managed to join the elite club of nations possessing nuclear weapons.

Schmidt blames country’s rulers
Schmidt worries about the rise of radical mosques and madrassas in Pakistan. He pins the blame largely on the country’s rulers, who believed they could use Islamic radicals to strengthen Pakistan’s position in its enduring face-off against India.

Initially, he said, the strategy worked, but after the 9/11 attacks, Pakistani rulers’ support for the U.S. led many of their jihadist allies to turn against them. Today, Pakistan’s rulers fear the consequences of going after the jihadists and still hope they can be used to advance the interests of the state.

Meanwhile, Pakistan seeks to curb India’s growing influence in Afghanistan by backing the Taliban there, which puts Pakistan at odds with the U.S.

What about the chilling thought that Islamic extremists could some day gain control of the Pakistan’s nuclear arsenal, or put nuclear weapons in to the hands of rogue states or terrorists beyond Pakistan? Schmidt says the army regards these weapons as the nation’s crown jewels, has heavily secured them and that as of now, Pakistan’s jihadists don’t have the power to take over the government.

Could the army collapse? He mentioned three ways: war with the U.S., a growing radical underclass in the urban areas, or continued growth of Islamic extremism. But Schmidt views a collapse as unlikely. “It’s a pretty solid organization” that serves as a force for stability to help Pakistan keep on “muddling through,” a condition that the Pakistanis have grown accustomed to.

Yet Pakistan’s relations with the U.S. continue to deteriorate. Its tensions with India, which were easing four years ago, have raged anew since late in 2008 when the Lashkar-e-Taiba, a Pakistani-based jihadist group, unleashed attacks that killed more than 160 people in the heart of Mumbai.

Many Pakistanis believe the U.S. policies tilt toward India, which is more democratic than Pakistan and has deep business ties with the U.S, unlike Pakistan. And Pakistan’s Islamic extremism is unlikely to fade until that happens around the world.

Muddling through, it seems, is a process riddled with fear and uncertainty.

Dave Beal can be reached at dandcbeal[at]msn.com.