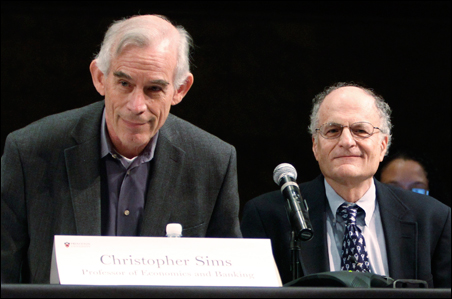 I was a lucky student at the University of Minnesota.

With Monday’s award of the Nobel Prize in economics to Thomas J. Sargent and Christopher A. Sims, four of my five macroeconomics professors have now won a Nobel.

But I should have been five for five in macro.

Another remarkable professor I studied under, Neil Wallace, should have shared this week’s prize. Here’s why.

Four Horsemen of Minnesota
The Department of Economics at the University of Minnesota was an exciting place in the 1970s and 1980s.

Sargent, Sims, Wallace and Edward Prescott (Nobel laureate in 2004) were known as the Four Horsemen of the department because of their innovative work in macroeconomics. (Another of my macro teachers, George Akerlof of the University of California, Berkeley, won a Nobel in 2001.) Leonid Hurwicz, Nobel Laureate in 2007, and Walter Heller, chair of the Council of Economic Advisors under President Kennedy, were both active members of the U of M department.

N.J. (Jim) Simler was the unflappable, pipe-smoking chair who kept the whole place running smoothly. I took courses with all of these scholars, and Professor Hurwicz was kind enough to serve as my honors thesis adviser.

The U of M Economics Department did not form a coherent “school” like the Chicago School. They shared a respect for using economic theory and statistical technique to understand the economy. But this did not lead to a unified world view or a monolithic political perspective, a lesson current policy makers should learn. 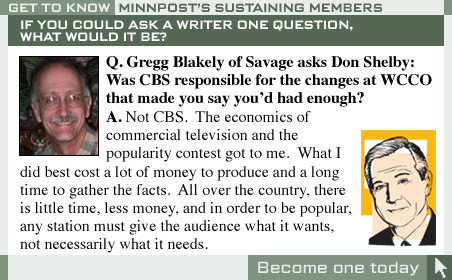 The faculty differed greatly in their teaching styles. Sargent was meticulously prepared for class. For instance, in one course we used a draft version of a book he was writing; I opened the notes during the lecture and found that he was repeating the text word-for-word without the book in front of him.

Sims, on the other hand, came to class with a few sheets of paper, and starting in the upper left-hand corner of the blackboard, would fill it with equations. Then, inevitably, he would pause and say, “Wait, I think that should be a minus sign” — and started changing bits and pieces of equations we had spent 40 minutes writing down, sometimes leaving us in utter confusion and apologetically telling us that he would straighten everything out in the next class.

Rational expectations is now a standard tool in dynamic economic models, but at the time it was revolutionary. Robert Lucas of the University of Chicago was awarded a Nobel in 1995 for his work in macroeconomics, in particular for his application of rational expectations.

Lucas’ models were, however, intensely mathematical and difficult for much of the profession to understand. Sargent and Wallace in their joint work made rational expectations something that macroeconomists could understand and start to use.

Sargent himself gave a clue in a 2005 interview [PDF]. It turns out that Wallace asked Sargent to remove his name from almost all of the papers they wrote together because he didn’t think they were good enough!

As Sargent himself said, “When I think of Neil, one word comes to mind: integrity.”

Learning from Wallace
I took two undergraduate honors courses from Wallace in the early 1980s. He did not use a textbook in either course. Instead, he gave us articles that he and others had written employing the tools that he was developing. Only later did I learn that two of the articles were early versions of the “Unpleasant Arithmetic” paper. I still have my notebooks from these courses and review them still, despite the fact that textbooks now exist containing this material.

My most powerful memory comes from the first day of my second course with Wallace. He came into the course, said hello, then wrote this on the board:

The catalog listed the title of the course as “Money and Banking,” but his point was clear: We were not going to simply accept a textbook definition of what money is or what most people think banking is. We were going to ask what really constitutes money in economic models, what are banks (besides buildings that are imposing and institutions that are regulated by governments.)

The models Wallace taught us 30 years ago are now the basis for an approach called the New Monetarist Economics [PDF]. In this work, Wallace’s call to answer the questions Money (?) and Banking (?) are taken as the starting point for an entire field that is reopening many questions in monetary theory and policy.

The work of Wallace, Sargent and Sims directly affects macroeconomic policy today. Ben Bernanke and the Federal Reserve announced that they would keep interest rates near zero until mid-2013 because they absorbed the rational expectations perspective: policy needs to be clear and consistent. Telling everyone exactly where the interest rate will be for exactly how long flows directly from rational expectations macroeconomics. This is only one of many examples.

Taking those two courses with Neil Wallace, now a professor at Penn State, made me want to be an economist. I learned from his example that a person could spend a lifetime asking profound, fascinating and original questions and truly make a difference in people’s lives, especially those of students.

He should have shared Monday’s announcement with Sargent and Sims. Perhaps it’s not too late for the Nobel committee to recognize its mistake.

Louis Johnston is associate professor and chair of the Department of Economics at the College of Saint Benedict and Saint John’s University. He spent the years 1979 through 1985 as an undergraduate and graduate student at the University of Minnesota.