The Occupy Wall Street movement has spread throughout the state. Per Peterson of the Marshall Independent notes that a small group gathered at Memorial Park in downtown Marshall on Friday to be part of one of more than 1,460 rallies across the country. Organizer Josh Messenger said, “It’s gotten to the point where it’s not just the economy that’s the problem, it’s how much we care about the economy. That needs to change.” Of course, being Marshall, the protest was more low-key than its New York counterpart. Messenger said the city told him he didn’t need a permit to occupy Memorial Park since it was after September, although the demonstrators are not allowed to stay in the park overnight. Up in the Fargo-Moorhead area, Marino Eccher of the Forum reports that Occupy Fargo-Moorhead has occupied the corner of Broadway and Second Avenue North around the clock since the group rallied there at noon Saturday. Eccher then describes the occupiers’ complaints against the U.S. financial system. Over in Duluth, Mike Creger of the News Tribune reports that food is plentiful at the rally at the Civic Center; it’s people that organizers need. The food setup is called Food For All, Occupy Your Kitchen and The People’s Kitchen. On the small lawn in the middle of the plaza, about 20 people had camped there Saturday and Sunday nights. Andrew Johnson said late Monday afternoon there was little to no contact with police or city officials of any kind throughout an occupation that began early Saturday.

Renville County Sheriff Scott Hable says the body found Saturday in a cornfield northeast of Hector late Monday is that of Robert J. Verdon, 56, of Cosmos, the West Central Tribune is reporting today. In early September, the Renville County Sheriff’s Office recovered a vehicle belonging to Verdon, which had been found abandoned near the cornfield where his body was ultimately discovered, the sheriff said in a news release. Verdon’s family later filed a missing person’s report with the Sheriff’s Office in Meeker County, where Verdon lived. The official cause and manner of Verdon’s death are still pending, Hable said. The body was found Saturday by a farmer harvesting corn.

Southwestern Minnesota counties have lifted their burn bans, but officials are still asking farmers to use extreme caution during harvest, reports Justine Wettschreck of the Worthington Daily Globe. Noting that other counties had already lifted their burn bans, Sheriff Kent Wilkening lifted the ban in Nobles County Monday. Field fires, mostly caused by farm equipment, kept many area fire departments busy for days. Coincidentally, Wettschreck picked up the newly released 2010 “Fire in Minnesota” report. Minnesota Fire Marshal Jerry Rosendahl reported that there were 39 fire deaths in Minnesota in 2010, a slight increase from 2009’s record low of 35 deaths. One arson fire took place every seven hours in 2009 and every eight hours in 2010. According to the report, more than 1,500 Minnesota civilians have died in fires in the past 27 years, with the fire death rate in Greater Minnesota almost twice that of the metro area in the past several years until 2010, when the rate was higher in the Twin Cities.

It’s good to see midsized firms on the offensive. Kevin Allenspach of the St. Cloud Daily Times  puts the guts of the story in his first paragraph: “Wolters Kluwer Financial Services, whose largest office is in St. Cloud, announced Monday it has acquired SASGAS, a Chinese provider of regulatory and risk management solutions for the financial services industry.” The acquisition won’t affect the St. Cloud office, which has more than 600 employees. SASGAS provides financial reporting software to foreign and domestic banks in China. SASGAS has offices in Shanghai, Beijing, Guangzhou and Shenzhen. With the acquisition, Wolters Kluwer provides services to 64 foreign banks, representing 56 percent of the Chinese market — including 21 of the top 50 banks. The company has almost doubled its investment in China during the past five years. Wolters Kluwer has 30 offices in 20 countries and a total of 19,000 employees. 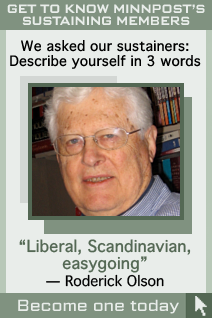 This story from the Daily Times isn’t so positive. TaLeiza Calloway wrote a novel-sized story that says vacant homes in the St. Cloud area have gone up 211 percent since 2000. The causes? “An increase in foreclosures since 2000, coupled with a shifting housing market and the economic downturn has contributed to the rise in vacant housing units in St. Cloud, Sauk Rapids, Sartell, Waite Park, St. Joseph and St. Augusta. (2010 U.S. Census) data also show an increase in rental properties and housing units for sale in these communities,” Calloway writes. In 2000, the total number of vacant housing units in the six cities combined was 906; in 2010, there were 2,816. The results? More rental units, more vacant houses, an increased demand on property management enforcement, and so on.

And now the tide turns to a battle of another kind: Carrie Luna has launched her own war against soap manufacturers. “I just want to give Tide a kick in the butt,” Luna declared, as she filled jug after jug with homemade laundry detergent she says is “every bit as good” as Proctor and Gamble’s detergent and costs just a little more than 50 cents a gallon to make. Jerome Christenson of the Winona Daily News brings Luna’s soap to life, along with her recipes. Before making soap, she estimates she spent more than $400 a year on laundry detergents, fabric softeners, bathroom cleaners, floor cleaners, all-purpose cleaners and air fresheners. Then she remembered how her Texas grandmother had made all manner of soaps, lotions and other cleaning products in her own kitchen from a few simple, common ingredients. “I tried it and it worked,” she said. Anyone can get similar results using a few inexpensive household ingredients, a few drops of scented oils, and a little effort, she said. In case you’re suspicious, Carolyn Brown, an Iowa State University Extension home economist, endorses Luna’s formulations. “They actually do work,” she said, “They’re all ingredients we commonly recommend.”

John Fitzgerald is a longtime journalist and Minnesotan. He lives in Buffalo.