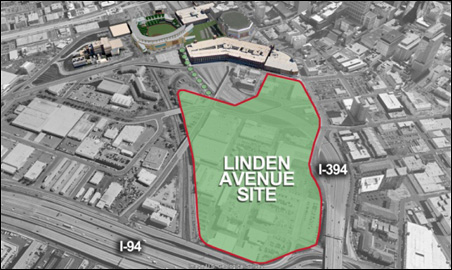 City of Minneapolis
A map of the proposed Vikings stadium site behind the Basilica.

The mysterious third site [PDF] in Minneapolis for a proposed Vikings stadium — behind the Basilica of St. Mary along Linden Avenue — will come into clearer focus next month.

Sam Grabarski, president and CEO of the Minneapolis Downtown Council, confirmed to MinnPost that a detailed proposal for what he called a “stadium district” in that area will be part of his group’s “Minneapolis 2025” plan, to be published Dec. 14.

“We’re not talking too much about who’s behind it,” Grabarski said.

Neither is anybody else.

Minneapolis Mayor R.T. Rybak’s spokesman, John Stiles, claimed he did not know which city business leaders were pushing that site, even though Rybak referenced it as one of three options in the city after an Oct. 27 meeting with Governor Mark Dayton.

The stadium would sit on a 41-acre site, with two other parcels of 19 and 13 acres used for parking and tailgating.

That’s a lot smaller than the 260-acre stadium parcel at the old U.S. Army ammunition plant in Arden Hills, so a local architecture firm Grabarski declined to identify is giving the site a once-over to make sure a stadium will fit there. (Finance and Commerce reports that the company is AECOM Technology Corp.)

The district would include a pavilion large enough to hold ancillary events for — get this — a Super Bowl, with perhaps an amphitheater and outdoor athletic fields, Grabarski said.

Xcel Energy and the city own most of the land. Interstate 94 runs by the site, which isn’t far from where Lyndale and Hennepin Avenues intersect.

“It emerged during some planning, having to do with traffic patterns and transit routes,” Grabarski said. “It became more and more obvious about how traffic flows in that part of downtown. We put two and two together, and began to see that it could be an excellent site for the football stadium as part of a larger district of sports and development.”

The Linden Avenue site figures to be at least as costly as the Farmers Market one ($1.03 billion), slightly cheaper than Arden Hills ($1.11 billion), and more expensive than a Metrodome renovation ($895 million). Here’s a comparison of the Minneapolis sites. [PDF]

The Vikings, of course, don’t want to hear about any site besides Arden Hills, which Ramsey County commissioners proposed on Thursday to buy from the federal government for no more than $30 million.

Dayton hasn’t favored any particular site, and it remains to be seen whether the state Legislature will take up a stadium bill in a special session before it reconvenes on Jan. 24.

That does not deter Grabarski, who noted three major projects included in the “Minneapolis 2010” plan 15 years ago — a new Twins ballpark, the central library and the Guthrie Theatre — all got built in different places than where they were proposed.

On another stadium front: NFL Commissioner Roger Goodell was in San Diego on Wednesday and Thursday stumping for a new stadium for the Chargers, who are among the teams in the Los Angeles mix. Replace “San Diego” with “Minneapolis” in this San Diego Union-Tribune story and see how familiar the quotes and reader comments sound.