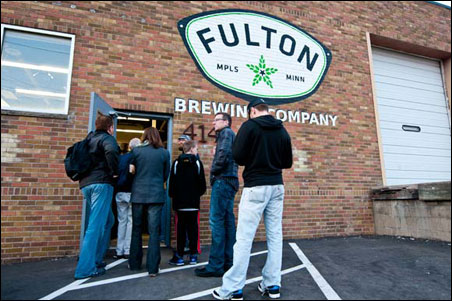 Photo by Bill Kelley
Lining up for growlers at Fulton Brewery.

The line stretched through the parking lot, and the air of excitement and camaraderie was palpable. Even Minneapolis mayor R.T. Rybak showed up for the moment the doors opened and eager shoppers rushed forward.

Just another Black Friday doorbuster? Not even close: this crowd was assembled for the grand opening of Fulton Brewery in the Warehouse District, with microbrew fans waiting for a chance to buy a 64-ounce container (called a growler) of the new brewery’s distinctive ales and stouts. “Drink up!” shouted a cheery Mayor Rybak as he hoisted a pint of caramel-tinted ale.

The Twin Cities are seeing a boom in these types of efforts, and it seems that some beer-focused liquor stores are having trouble finding shelf space for all the new creations from local microbreweries, as well as craft beers.

A quick note of definition: as outlined by the Brewer’s Association, craft breweries have an annual production of 6 million barrels of beer or fewer — no puny amount, considering that the best-selling beer in Minnesota, Michelob Golden Draft Light, only sells a bit less than one million barrels a year — while microbreweries are limited to producing 15,000.

According to Rob Shellman, founder of Minneapolis-based beer consulting firm Better Beer Society, both craft and microbreweries are defined as small and independent, with less than 25 percent of the brewery owned or controlled by another alcoholic beverage industry member. In other words, if a brewer is whipping up some craft-type concoctions but the place is owned by an entity like MillerCoors, then they tend to get less credit for being crafty (we’re looking at you, Blue Moon and Leinenkugel).

That means more and more local residents are attracted to microbreweries, those newest darlings of the beer world, with their often-tattooed and always-lively brewers, as well as funky beer names like “Divine Oculust” and “Angry Planet Pale Ale” and “Masala Mama IPA.”

“This movement is happening all over the country, not just here,” says Shellman. “However, we’re very fortunate to be living in one of the most exciting and up-and-coming regions for this beer renaissance.”

The level of activity over the just the past few years has been robust, if not ferocious, and it looks like even more microbreweries could be cropping up in the years ahead. Did everyone’s palates suddenly shift from fancy cocktails to microbrews? It might seem so, but like all revolutions, this one has been fomenting for quite a while.

One major factor for the surge in new microbrew efforts has been changes to regulations and laws that govern production and sales.

Most notably, Surly Brewing recently lobbied for a major shift to rules about microbreweries operating taprooms out of their production facilities. Considering that Surly’s plans involved a new $20 million restaurant and beer garden — providing plenty of construction jobs and subsequent brewery jobs — the Minnesota Legislature passed a law known as the “Surly Bill” in May.

Also a boon to beer lovers, last year’s change to Minneapolis city ordinances concerning growler sales allowed Harriet Brewing and Fulton Beer to sell their own brews instead of relying on distributors. Next up in the growler business will be Dangerous Man Brewing, which won its own recent victory in Northeast Minneapolis when restrictions about breweries near houses of worship were lifted.

“The deregulation in the beer industry and the changing regulatory environment here are progress,” says Jason Sowards, owner of Harriet Brewing. “Small microbrewers like myself are being given more freedoms, and that’s allowing us to be more creative in what we brew and how we sell it.”

That level of independence is more than exciting, he adds: it could give brewers the chance to branch off into all kinds of interesting directions. Sowards notes, “Who knows what we’ll be seeing with respect to brewing in the next 10 years? It could be all kinds of crazy, great stuff.”

Another strong driver has been the growing focus on local foods and community efforts. As communal gardens and urban farms pop up across the Twin Cities landscape, the craft beer and microbrew movements thrive as a result.

Back before there were so many regulations around the sale of beer — sparked by Prohibition and subsequent beer industry forces—there were many more neighborhood brewpubs, Sowards says. As the rules lift and the community model of living is embraced, those local spots are coming back into the landscape.

That’s also prompting the growth of homebrew efforts, and bringing growth to outfitters like Northern Brewer, which just opened a new flagship store in Minneapolis to go along with its other two retail locations — in Saint Paul and Milwaukee — and enormous warehouse.

Wannabe brewers can also opt for more supervised brewing at Vine Park Brewing in St. Paul, which allows groups to brew on site. Dan Justesen, owner of Vine Park, says that the brewery has operated for 16 years, and that he’s been struck lately by the surge in enthusiasm and curiosity. More people want to know about Belgian-style beers, for example, Justesen points out. Also, ironically, people seem to be drinking less, and that leads them to better-crafted brews.

“When someone doesn’t drink as much, they want to drink better,” he says. “They also want to drink local. That’s really a huge trend.”

“Saturation is inevitable,” says Shellman. “The market itself should dictate who stays and who goes, and we should be left with only high quality and interesting craft beers.”

It’s likely to be quite some time before true market saturation, some microbrewers believe, and beer lovers can rejoice at all the experimentation and new beers that will come along the way.

Part of the reason that the market isn’t exhausted quite yet is that microbrews don’t usually inspire the same level of loyalty as a more mainstream product (like, say, Michelob Golden Draft Light), which means that enthusiasts are willing to sample a range of brews rather than stick to a favorite.

Sowards notes that when he goes on vacation, he considers it a sin to drink the same beer twice, even if he loves a certain choice. That mentality is rampant in the Twin Cities, and it’s likely to keep the beer scene hopping for years to come. “This is a market that’s hungry for variety, with people who want to find out more about the complexities of beer,” he says.

Brian Hoffman, co-founder of Fulton Beer, adds: “If someone tries a Surly and likes it, chances are that they’ll try a Harriet Brewing, and so on. As that keeps happening, it benefits all of us. The rising tide of beer appreciation raises all ships, and it’s a lot of fun to be part of it.”

Elizabeth Millard is Innovation and Jobs Editor of The Line. This article is reprinted in partnership with The Line, an online chronicle of Twin Cities creativity in entrepreneurship, culture, retail, placemaking, the arts, and other elements of the new creative economy.

I’ll drink to that: the making of the Twin Cities microbrew revolution