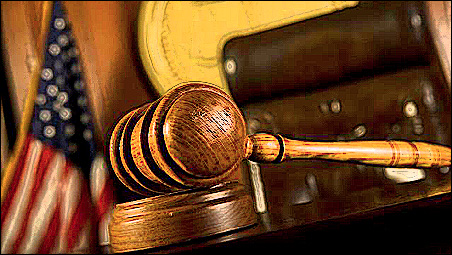 Minorities who graduate from high school and college and who win admission to law school tend to get their JDs and pass the bar. And even in the current tepid economic climate, employers are still pursuing newly minted lawyers of color.

Yet data shows that nationwide, an astonishing 87 percent of ethnically and racially diverse law firm associates quit within their first five years on the job.

The challenges are myriad — particularly here.

Just 13 percent of attorneys in Minnesota come from a population of color — only marginally better than the national average of 11.6 percent. A 7-year-old nonprofit, Twin Cities Diversity in Practice helps its members, 27 local law firms and 12 corporate legal departments, attract and retain a more diverse legal workforce.

It’s a surprisingly tough task, particularly for an urban area that has not traditionally attracted a lot of minority professionals.

“The Twin Cities has done a better job talking about its business climate,” said Executive Director Val Jensen. “It’s pretty white and pretty cold. So why would you want to come here as an African American or a Latina?”

And once you’ve moved here, often from a community that gets more of its minorities to law school, what’s going to help with the culture shock that comes with grueling schedules, outdated workplace values and a dwindling number of big-buck partnerships as the reward for acculturating?

It’s Jensen’s job to pay attention to every segment of the pipeline, from getting more candidates into law schools, making sure they understand the realities of the profession and ensuring that their employers create room for advancement and life-work balance.

The same study also found a dip in the recruiting of minorities by law firms, which have been notoriously hard hit by the recession, but an increased focus on the part of corporate legal departments and other entities that employ attorneys.

The percentage reporting discrimination in workplaces dropped from 77 to 75 during the same period, while perceived bias in courtrooms fell from 61 to 59 percent. Law schools are perceived as the most welcoming environments, with experiences with bias reported by 52 percent.

The overall rise in perceived racial discrimination can be attributed to greater awareness on the part of non-minorities. Some of those in supervisory positions surveyed by the bar said they would be interested in training on unconscious bias.

Still, the state bar found that a disproportionate number of lawyers quit jobs here each year while employers continue to complain that the career-preparation pipeline is not producing enough candidates.

Which means Diversity in Practice’s work is cut out. “Our focus is on getting lawyers of color into the Twin Cities and then supporting our members in keeping them here,” said Jensen.

Recently, the organization invited some 75 minority students from the Twin Cities’ four law schools to the Minneapolis offices of Faegre & Benson, where they spent an evening meeting mentors they’ll be teamed with during a 6-month-long mentoring program.

“The way large law firms work is they bring [prospects] in after the second year of law school typically,” said Jensen. “Everyone wants to take you to lunch. But that wooing period is not at all indicative of what the next three to five years of your life is going to look like.

“You get on the job and in your practice group and then there’s a disconnect of expectations,” she added. “You might very well have to do [tedious] document review for a few years.”

Better to form an early relationship with someone who is working 80 hours a week and otherwise making the sacrifices many associates can expect.

Perception of major/moderate bias in 2011 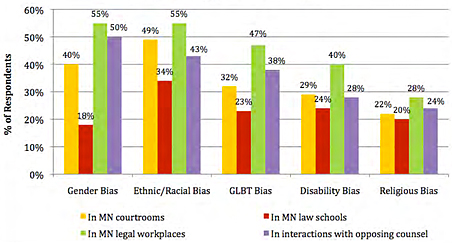 The group also sponsors an annual recruiting conference that brings upwards of 150 minority candidates to the Twin Cities to meet with potential employers. At the event, the visiting students are told about the same quality-of-life factors that other employers use to sell the metro area.

The number of Fortune 100 companies located here is one such factor. Another is the urban area’s manageable size.

“Lawyers are always concerned with how do you get access to people,” said Jensen. “It’s important to be able to build your business.”

She also talks about living in the city: “I talk about the fact that my kids go to public schools and they’re pretty decent. My commute is manageable.”

Generational issues
Diversity in Practice doesn’t just work with new lawyers. Much of its work involves educating its members. In addition to talking about recruiting, welcoming and promoting minorities, the organization is grappling with many of the same generational issues law firms are confronting with younger non-minorities.

For one thing, many younger lawyers are reluctant to scrabble for a partnership.

An increasing number of law school grads want to get a good first job, pay off their loans and then move on to doing what they want to do, she added. And increasingly, that does not include being seen by the right people for the right number of hours each week.

“Face-time to them is Facebook,” said Jensen. “They can do their work anywhere. So how do you measure success and what does that look like?”

For some, it means giving back. One of this year’s mentors was a program participant just a few years back. Esteban Rivera grew up in Ecuador and practiced law there before emigrating to the United States. He graduated from Hamline’s law program a year ago and now practices at Igbanugo Partners International Law Firm.

“Now, he’s reaching back and being a mentor to someone at his old law school,” said Jensen. “We’ve got to build that pipeline, and prime it early and often.”