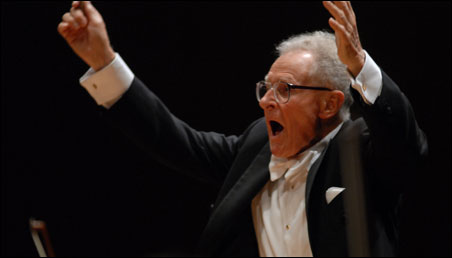 Photo by Toshiyuki Urano
Today, at a spry 88, having lived in Minneapolis since 1960, Stanislaw Skrowaczewski is the world’s oldest working major conductor.

Music jolted the young Stanislaw Skrowaczewski as if he had been hit by a bolt of lightning. The conductor-composer-to-be was just 7 when, walking with a friend in the city of his birth, Lwow, Poland, he heard music coming from an open window. The boy was immediately thrown into something like a trance. He couldn’t move. It was as if, he later recalled, he had seen God standing in front of him. Taken home, he remained bedridden for two days with a fever of 104 degrees, confused and talking nonsense. Upon recovery, he found out that the music that had so disturbed him was the Adagio from Bruckner’s 7th Symphony, a work — and a composer — that eventually would play a large part in his career. He got hold of a score and studied it with the intensity that young people today give to video games.

The boy, nicknamed Stas (Polish for Stan), turned out to be a prodigy along the lines of Mozart and Saint-Saens. He wrote his first orchestral work, an eight-minute overture, at the age of 7 and made his conducting debut at 13, playing and conducting Beethoven’s Piano Concerto No. 3. His career as a pianist was cut short a few years later, however, when a wall fell on him during a Nazi air attack, causing permanent nerve damage to his hands and turning him toward conducting and composition. After several death-defying episodes — including hiding in a secret space under the floor of his parents’ apartment during the Soviet “liberation” of Poland — Skrowaczewski’s life became one of constant accomplishment.

At 25, he was Poland’s most important young conductor. In 1960, after a harrowing escape from Poland with his wife, Krystyna — the two of them each carrying only a small suitcase — Skrowaczewski spent 19 years as music director of the Minnesota Orchestra, later named its conductor laureate, and has continued as a busy, world-traveling conductor and much-acclaimed composer. Today, at a spry 88, having lived in Minneapolis since 1960, he is the world’s oldest working major conductor and perhaps, as Eugene Ormandy described him, “the last great music director.” (“They just don’t make us anymore,” Ormandy added.) This week Skrowaczewski is in Japan conducting performances of Beethoven’s 9th Symphony and is working on a concerto for cello and orchestra. He has conducting engagements through 2013.

It has been an extraordinary life and a brilliant career, though the career has been under-acknowledged until recent years. And now we have a superb chronicle of that life, “Seeking the Infinite” by Frederick Harris, Jr., music director of the Massachusetts Institute of Technology Wind Ensemble and Festival Jazz Ensemble. Harris holds a doctorate in music education with a focus on conducting from the University of Minnesota, which means he had several years in the Twin Cities during which he could watch Skrowaczewski — the man and the musician — up close. His biography, the result of nine years of research, is a weighty but easy-to-read 634 pages that happily includes a complete discography of the more than 200 recordings Skrowaczewski has made, among which is a useful listing of all the recordings of his own music.

Some thought him cold
Harris paints the picture of a complicated, gifted man who reveals much of himself in the book’s many interviews. Harris also interviewed more than 200 of the conductor’s friends, associates and family members, including his two sons, Paul and Nicholas, both musicians, and his wife of 55 years (who died early this year of complications of a rare strain of palsy). Harris obviously has great respect and even affection for his subject, but he doesn’t ignore the fact that many of the musicians here viewed Skrowaczewski as cold and distant. He quotes an anonymous player (most of the others are identified): “The orchestra is bored to death. Skrowaczewski works and studies hard, but he doesn’t know how to handle people.” Oddly, it was the conductor’s reserve that first impressed at least some of them. The late Herman Straka, a prominent orchestra violinist, compared Skrowaczewski to his predecessor, the hot-tempered Antal Dorati. “Skrowaczewski was everything Dorati wasn’t,” said Straka. “He was a gentleman, very soft-spoken, no tantrums. He never did have one all those 19 years.”

Harris doesn’t put his subject on a psychiatrist’s couch, but it’s possible that the hardships and uncertainties of Skrowaczewski’s war years brought on a kind of quiet stoicism that only dissolved in later years. It also could be that the musicians were especially skeptical of a conductor who had been hired by the board without ever having conducted the orchestra, something not likely to happen today. And not everyone found Skrowaczewski chilly. Harris quotes cellist Lynn Harrell, who worked with Skrowaczewski many times. “This man is not only a great artist and a great conductor but also an enthusiastic, lovely, warm human being.”

There is no disagreement, however, that Skrowaczewski improved the orchestra greatly during his years at the helm and that, warm or chilly, he’s a very serious musician, one not easily distracted by the trivia of popular culture. (Harris relates that once at a family gathering, Oprah Winfrey was discussed. Not knowing whom they were talking about, Skrowaczewski finally said, “Who is this Or-pah?”)

The orchestra‘s name change
To his credit, Harris delves into some of the difficult aspects of the Skrowaczewski years — the notorious name change, for instance, when, in 1968, the world-famous Minneapolis Symphony became the unknown Minnesota Orchestra. Skrowaczewski, who hadn’t even been consulted on the matter, came out against the change, as did nearly all the musicians. He makes a frank admission to Harris. “We lost a lot (by the name change),” he said. “We lost time, and I lost my reputation. It absolutely affected my career. I still feel it all the time.”

This is poignant, given the fact that it was Kenneth Dayton, Skrowaczewski’s great friend and supporter, who was one of the key players in the name change and, as has long been rumored, it was Dayton who asked Skrowaczewski in the late ‘70s to give up his position with the orchestra. Harris also sheds light on the awkward situation with Frederic Fennell in the early ‘60s (Fennell was hired as an assistant conductor without Skrowaczewski’s knowledge) and with the conductor’s seemingly endless disputes with his own management, chiefly with Columbia Artists and its all-powerful CEO, Ron Wilford. And it was Wilford, Harris indicates, who kept most of his big-name conductors from taking guest-conducting engagements with the Minnesota Orchestra, something audience members often complained about. Wilford, it turns out, didn’t regard the Minnesota Orchestra highly.

Harris suggests, but doesn’t say directly, that both Skrowaczewski and the orchestra profited from the conductor’s departure in 1979. Surely there was some benefit to be gained from each of his successors: Neville Marriner, Edo de Waart, Eiji Oue and — finally hitting the jackpot — Osmo Vanska. There’s no doubt that Skrowaczewski’s career blossomed throughout the ‘80s and ‘90s and up to the present time. He served as music director of the Halle Orchestra in England from 1984 to 1991 and in 2007 began a three-year appointment as principal conductor of the Yomiuri Nippon Symphony in Japan, of which he is now conductor laureate. It was during these years that he returned to composing, producing a rich body of orchestral and chamber works, two of which, in 1997 and 1999, were short-listed for the Pulitzer Prize. And by all accounts, Skrowaczewski became a different conductor in the later decades — looser, less tense, more emotional — and, perhaps to an extent, a different person. Eventually, he came to be viewed as a grand, “gracious master,” to use the words of the Milwaukee Journal on the occasion of Skrowaczewski becoming, in the mid-90s, music advisor of that city’s orchestra. Surely some sort of change is reflected in a memory that Skrowaczewski shared with Harris.

“Three or four years ago, I was conducting Shostakovich’s 4th Symphony with the Halle Orchestra. I was crying when I reached the coda of the first movement. I couldn’t see anymore. The harp player said to me afterward, ‘What happened to you?’ You know, I would like to write something that makes me cry. It happens so seldom.”

His greatest contribution to Minneapolis
In the summer of 2008, Skrowaczewski suffered heart damage and atrial fibrillation, for which he now wears a pacemaker. He has had eye trouble since the ‘60s, and he no longer climbs mountains — one of his great passions. He will, of course, eventually stop conducting all over the world, though it should be remembered that Leopold Stokowski conducted right up until his death at 95. Skrowaczewski’s greatest contribution to Minneapolis culture stands at 11th and Nicollet, Orchestra Hall, one of the country’s finest concert halls and a project that never would have happened had Skrowaczewski not argued for it ceaselessly. The lobby will be redesigned next season, and who knows? Maybe even famous sugar cubes, thought to be so crucial to the hall’s exceptional acoustics, might go eventually. (The late Cyril Harris, who designed the acoustics, whispered to this writer a few years ago a deep, dark secret: The cubes actually have no effect on acoustics but were put in place simply because they’re interesting to look at.)

In sum, Harris has produced an engaging, smart book that adds a great deal to local cultural history and to the history of conducting. (Two minor mistakes can be easily corrected. Richard Addinsell, not Aspinall, composed the “Warsaw Concerto,” and Terry Erkkila, who with Dan Sullivan composed an amusing cabaret love song for the Brave New Workshop, “I’ve This Mad, Really Bad Thing for Mr. Skrowaczewski,” is a male.)

Finally, we’ll let Skrowaczewski explain the book’s title. “The reason why music moves me is because through music I commune with the metaphysics of the world, with the universe. Music replaces religion or faith for me. It carries me into otherworldly regions, invariably sad and tragic.”

Michael Anthony, a former classical music critic for the Star Tribune, writes about music and other topics for MinnPost.

‘Seeking the Infinite’: a superb chronicle of Skrowaczewski’s extraordinary life