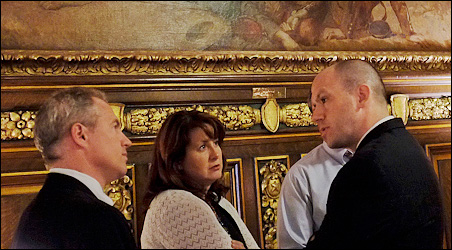 Some legislative and GOP insiders tell me politics over the proposed Vikings stadium was a factor in the ouster of the two most powerful people in the Minnesota Senate.

That would help explain the brusque, even brutal, dismissal of Amy Koch as Senate majority leader and Michael Brodkorb as Senate communications director.

One GOP source close to the drama claims that Brodkorb’s participation in the legislative stadium working groups drew out the knives that carved him out of a job.

Brodkorb, a vocal stadium supporter, was seen as an effective contributor to the Vikings stadium discussion, which could have resulted in legislation in 2012 that uses gambling revenue to finance the project.

“The House Republicans didn’t want to deal with the issue before 2013,” said the source. “They wanted the Senate hearings to blow up, but they [the hearings] were in fact highly successful.”

Brodkorb’s forceful, combative style certainly contributed to this animosity. His enemies then took advantage of the opportunity to damage him when his boss, Koch, was forced out of her leadership post after allegations she had an affair with a subordinate staff member. Koch, by comparison, was an American sweetheart, as well as a successful leader, and may well have been collateral damage in the effort to destroy Brodkorb.

The Republican from Buffalo resigned her leadership post and announced last week she would not seek re-election after GOP legislative leaders confronted her last week about an inappropriate relationship with a staff member. Brodkorb then was later dismissed from his Senate staff position.

Backed using gambling
For opponents of gambling expansion, the removal of Koch and Brodkorb has its advantages. Koch backed the stadium and supported consideration of gambling to pay for it.

“There’s no question that the way Amy was treated was in direct retaliation for her connection to Brodkorb,” said the source with direct knowledge of the incident.

One state senator — a woman who, like others involved in this intrigue, would speak only on the condition of anonymity — was disgusted at the way the Koch dismissal was handled.

“Amy and Geoff Michel [assistant majority leader] share an office suite,” she said. “Why didn’t he just walk over to her and say, ‘Cut this stuff out’?”

‘A difficult situation’
Senate members disagree on how the extraction of Brodkorb and Koch was handled.

“A difficult situation is more heightened in a political setting,” said a former Senate senior staff member. “You don’t know what your opponents know or what they’re going to do.”

A power play could well have been the motive. Without Koch and Brodkorb leading the charge, the future of a new stadium for the Vikings is in limbo, dependent on the priorities of the new majority leader.

“I believe that whoever is elected majority leader has a lot of control over the agenda, so if a strong anti-stadium leader is elected, I don’t think you’re going to see a stadium — with or without gambling,” said Pat Anderson, a lobbyist for gambling at Canterbury Park and a member of the executive committee of the state Republican Party. “In picking a new leader, the senators are having to think through all these possibilities — it’s not just a personality.”

Ted Mondale, chairman of the Metropolitan Sports Facilities, told me this morning that he’s seen no evidence that the stadium played a role in the departures of Brodkorb and Koch, adding that he worked with Brodkorb on the stadium issue and that Brodkorb’s political judgment was well-respected.

He dismisses the claim that the leadership change will have a major effect on stadium legislation. “We have strong authors and we are going to keep on,” he said. “With business, labor, bipartisan, and the governor’s support, we’re going to get this done.”

In an interview with me Tuesday night, Brodkorb would not comment on the record about these developments except to say: “I believe passionately in the stadium issue and I hope it succeeds and I’m willing to do whatever I can to make sure the Vikings stay in Minnesota.”

The Senate, meanwhile, is expecting some kind of response from Brodkorb contesting his dismissal.

Even with the election of a new majority leader scheduled for Dec. 27, the turmoil will continue.