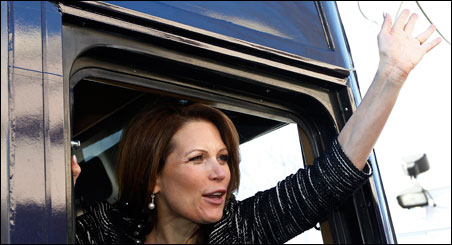 Even with Michele Bachmann joining Tim Pawlenty on the sidelines, Minnesota just might garner some national attention as the race for the Republican nomination for president heats up.

Minnesotans caucus on Feb. 7. In most years, the state’s caucuses have received little attention because they either were held late or were overshadowed by bigger primaries.

But this time around, Minnesota pops up seventh on the list of states in the nomination process.

And, unlike four years ago, when the state’s caucuses were overshadowed by “Super Tuesday” primaries across the country, only Colorado and Missouri will be holding primary/caucus events that day, too.

Minnesota a player?
“In my memory, this will be the first time ever Minnesota has been a player,” said Pat Anderson, a member of the GOP’s National Committee.

Despite the fact that Minnesota’s Republican caucuses are, like Iowa’s, non-binding, Anderson expects that the race still will be competitive both nationally and in Minnesota.

At the moment, only Mitt Romney and Ron Paul have substantial campaign operations in the state. But Anderson believes that Rick Santorum could quickly capture the imagination of many of the state’s evangelical conservatives, who likely would have supported Bachmann. 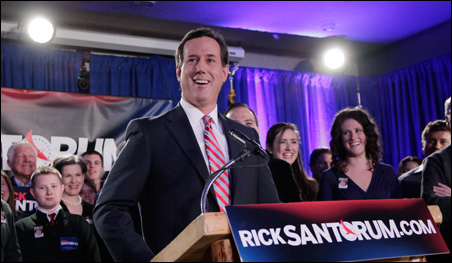 REUTERS/John Gress
Rick Santorum could quickly capture the imagination of many of the Minnesota’s evangelical conservatives.

She’s not alone in the belief in what Santorum might be able to do.

“Santorum will put together a Minnesota organization on the fly,” predicted Carleton College political science professor Steve Schier. “But social conservatives do well in the caucuses here, so he has a chance to win.”

Phil Krinkie, head of the conservative Taxpayers League of Minnesota, doesn’t share their belief that Santorum could be a factor in Minnesota by Feb. 7.

“His campaign ended last night,” said Krinkie. “True story. This morning one of my employees comes up to me and says, ‘Who’s this Santorum guy?’ He had months to become known in Iowa. He virtually moved there. He doesn’t have time to become known here.”

Clearly, the Tea Party Patriots likely will have a big say in what happens on Feb. 7.

Tea Party leaders always are reluctant to speak for the entire body, but Walter Hudson, media representative of the North Star Tea Party Patriots, did respond to questions about where the organization’s supporters may turn on caucus night.

“I haven’t had much of a chance to take the movement’s pulse in the wake of the results [in Iowa],” Hudson said. “I can tell you that I am not personally aware of substantial Tea Party support in Minnesota for either Romney or Santorum.”

At the moment, Romney seems to have the most insider GOP support, including Pawlenty’s, and likely would be considered a heavy favorite.

But recall, in 2008, Pawlenty and many other mainline Republicans supported Sen. John McCain, but it was Romney who walked off with a convincing win.

Ron Paul strong this time
Meantime, no pol in the state has so dedicated a following as Paul, who finished fourth in the caucuses in 2008. But this time around, there were more than 2,000 people who showed up at an October rally in St. Cloud to kick off the opening of a Paul headquarters.

According to Anderson, the Paul organization has already begun the slow, hard work of identifying its Minnesota supporters and urging them to attend caucuses.

But the major reason Minnesota caucuses may find themselves in the national limelight is the  lack of a Super Tuesday cloud.

Just four years ago, record numbers of Minnesotans were attending caucuses on the same night as primaries and caucuses in 22 other states, including such delegate-rich states as California, New York, New Jersey and Illinois.

What would it take for the pundits an the talking heads to show up in Minnesota?

“Whether the Minnesota caucuses matter depends on several factors,” said Schier. “First, whether there is serious competition for the nomination when they occur. Second, whether any of the candidates devote time and resources to the state. Third, whether the caucus vote count is available in a timely manner on caucus night.”

But, in the wake of Iowa, presidential politics isn’t the only big issue on the minds of many state Republicans.

Bachmann‘s future
Another huge question is whether Bachmann will decide to run again for her 6th District Congressional seat.

At this point, it’s likely that the 6th District will look substantially different when the state’s new political map is finally drawn, presumably by the courts. That new map won’t be unveiled until the end of February, which is after the caucuses but before legislative and congressional endorsement conventions are held.

Most seem to believe that Bachmann has little choice but to run.

“I think she’ll take a couple of weeks to re-start her engines and then be ready to go again,” said Krinkie.

Krinkie said he would be interested in running “if she decides not to.”

But after listening to her withdrawal speech, which was filled with “I’ll continue to fight” phrases, Krinkie became convinced she’s running and that she’ll be unhurt by her poor performance in Iowa.

Anderson shares Krinkie’s view that Bachmann will run for Congress.

“What else does she do?” asked Anderson.

Anderson said that the Iowa showing probably made Bachmann less likely to receive the big media contract that once seemed an option for her.

She also said that Bachmann may face a stiff fight to retain her seat, not only because of a changed district but because in her Iowa campaign, she seldom even mentioned that she was from Minnesota.

“All along I thought she’d wait on a decision [whether to run for Congress],” said Anderson. “I thought she’d stay in the [presidential] race and see what the district lines look like back here. But as it turned out, she just couldn’t stay.”

But the key thing about Bachmann, said Krinkie, is to never count her out. Laughing, he spoke of  “the Bachmann Support Group,” which is filled with GOP men who’d been defeated by her.

“That’s me, [Gary]  Laidig, [Jim] Knoblauch and Pawlenty,” said Krinkie of the Republicans who have fallen to Bachmann along the political trail. “Never underestimate what she can do.”

Certainly, the state’s new GOP chairman, Pat Shortridge, was careful and diplomatic in issuing a statement following her decision to withdraw.

“On behalf of the Republican Party of Minnesota, I’d like to offer a heartfelt thank you to Congresswoman Bachmann for waging a strong and aggressive run for the Republican nomination. … I wish her the best as she moves forward with whatever the future holds.”

After Bachmann’s exit, nomination schedule might put Minnesota caucuses in the spotlight