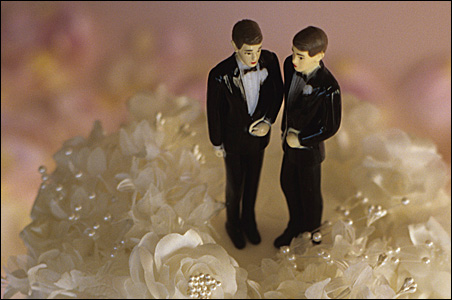 This morning, the Minnesota Court of Appeals is scheduled to hand down a decision in a little-known, controversial lawsuit [PDF] filed by three same-sex couples claiming the Minnesota Defense of Marriage Act is discriminatory.

The couples, who were all legally married elsewhere, filed suit in 2010 in state court after Hennepin County refused to issue them marriage licenses. After a trial court judge dismissed the suit, the couples, who comprise the nonprofit Marry Me Minnesota, appealed.

No matter its content, the decision released this morning will be controversial — particularly among gay-rights proponents, many of whom fear it will have a negative impact on the campaign to defeat a constitutional ban on same-sex marriage to be decided by voters in November.

In 2008, nearly two years before the suit and more than three before statehouse Republicans created the ballot initiative, two leading Minnesota gay-rights groups took a formal stance opposing the use of lawsuits as a means of achieving marriage equality.

“Because progress toward full marriage equality in other states has often been the result of court litigation, it is tempting to consider initiating a court challenge to Minnesota’s current bans on marriage for gay and lesbian couples,” said a statement issued by OutFront Minnesota, Project 515 and the Family Equality Council. “However, filing lawsuits in Minnesota is not the best approach at this time and in fact poses a significant risk to achieving marriage equality.”

Fears over method
An initial concern was that the wrong lawsuit would set a harmful precedent. The groups now additionally fear that the case will detract from efforts to defeat the amendment.

If the appeals court rules that the couples have cause to sue and sends the case back to Hennepin County for trial, some same-sex marriage advocates fear it could give a boost to the pro-amendment campaign by fueling arguments that a constitutional amendment is needed to combat “activist judges.”

If the court rules against the six, it will be bad for gay-marriage proponents, who believe the constitution affords all Minnesotans the same rights.

On the other hand, a ruling against the couples might also be good for amendment opponents, who can then argue that the legislative process works so there is no need for a change to the constitution.

Robbinsdale residents Douglas Benson and Duane Gajewski were married in 2000 in Vermont and in Ontario in 2003. Because Minnesota refuses to recognize their marriage, they may not share retirement benefits nor are they guaranteed legal recognition as a couple should one of them become ill.

Thomas Trisko and John Rittman registered with the city of Minneapolis as domestic partners in 1991, were religiously married in their church, St. Mark’s Episcopal Cathedral, in 1999, and legally in Winnipeg in 2005. In their 60s, they are increasingly concerned about their lack of legal standing in matters involving health care and survivorship.

Jessica Dykhuis, Lindzi Campbell were married in Iowa last year and have a son, Sean Campbell. Their registry as domestic partners with the city of Duluth affords them no legal rights, and they are unable to provide each other health insurance.