There is a wonderful unpredictability to a Mark Dayton news conference.

For example, Thursday afternoon the governor held a newser, with most of the discussion centered around the Vikings’ stadium issue.

There was no real news to this portion of the event.

The governor did announce another deadline. He asked Minneapolis Mayor R.T. Rybak and Rafael Ortega, chairman of the Ramsey County board, to send their “final proposals” for the stadium to him by Jan. 12. He also wants the Legislature to move on stadium bills early in the upcoming session. 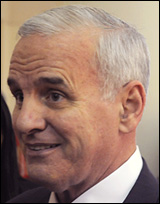 But the governor has been setting deadlines going back to November. So far, nobody has paid any attention to them, although Dayton said there’s always hope.

“This one [deadline] has not been not met yet,” he said, smiling.

More on the Vikings later.

But first, take a moment to follow the unpredictable turn this news event took.

In a non-Viking moment, Dayton was asked if he had any thoughts about Michele Bachmann dropping out of the presidential race.

He paused, pondered and then suggested he didn’t often agree with Bachmann’s political positions. But he noted “our democracy counts on” people running for office. She ran hard, and for that she deserves credit, Dayton said.

There was another moment of silence and then Dayton, from memory, started quoting John Kennedy, who attributed the following quote to Theodore Roosevelt.

The credit belongs to the man who is actually in the arena, whose face is marred by dust and sweat and blood, who knows the great enthusiasm, the great devotions, and spends himself in a worthy cause; who at best, if he wins, knows the thrills of high achievement and if he fails, at least fails daring greatly, so that his place shall never be with those cold and timid souls who know neither victory nor defeat.

This classic Dayton moment left newsies either feverishly trying to write down the quote, or anxiously looking at wrist watches, or merely scratching heads.  Where’d this come from?

The governor was asked if he’d uttered this Roosevelt-to-Kennedy-to-Dayton-to-the-Minnesota-media quotation to himself during the long, so-far futile Vikings stadium issue.

“I’ve applied it in times past, but not the Vikings,” he said.

But surely he will.  This is an issue that doesn’t seem likely to be going anywhere fast.

For all sorts of valid reasons, Dayton — along with Sen. Julie Rosen and Rep. Morrie Lanning, who are the legislative leaders on a stadium bill — believe that it would be wise for the Legislature to move quickly this session on the stadium.

“I think people in Minnesota, and the Vikings, deserve a decision,” Dayton said.

He rattled off the usual reasons he thinks a new stadium makes sense: Put construction workers to work. Strike while interest rates are low. Keep the Vikings in Minnesota.

Additionally, now that Sen. Dave Senjem is the majority leader, Dayton will be working with a stadium-friendly legislator who also supports racinos, which of course would be a way to fund a stadium.

But the reality is that this remain a volatile issue in an election year. How many legislators are going to be willing to take a tough vote — either up or down — on an issue that almost certainly can be pushed ahead to the 2013 session?

And, in fact, neither the governor nor the stadium bill authors have come up with anything resembling a complete bill.

The governor says that’s what’s behind the latest deadline letter: “Get all cards up on the table.”

Would he force the Vikings to take a Minneapolis stadium proposal?

No, he said. The state shouldn’t force an organization that will put up $400 to $500 million to do something it doesn’t want to do.

Rybak was quick to respond to the governor’s deadline, saying the city would have a “final proposal” on Dayton’s desk by Jan. 12.

Presumably that “final proposal” will still include at least two potential sites.