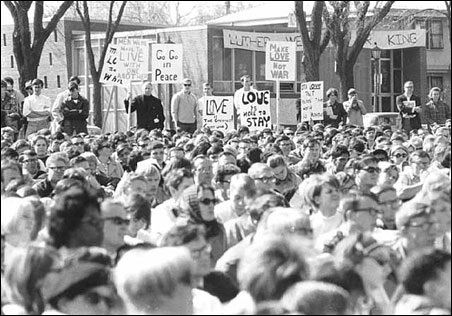 He was an “unsmiling man in a dark suit who spoke quietly about racial segregation,” according to Minneapolis Tribune reporter Dick Cunningham, who covered Martin Luther King’s visit to Minneapolis on a wintry January day in 1963.

The noted civil rights leader had come here for a University of Minnesota speaking engagement at a pivotal point in his career. Seven years earlier, he had been thrust into the national spotlight when he led the successful Montgomery bus boycott.

By the time of his January visit, he had become the acknowledged leader of this country’s burgeoning civil rights movement. That leadership role would bring new challenges in the spring of 1963 when he would confront the notorious Eugene “Bull” Connor in Birmingham, Ala. Then, later that year, in what would be a highpoint of his career, King would lead his famous March on Washington.

King arrived here on the morning of January 28 and went straight to an airport news conference.  There he delivered an upbeat message about the accomplishments of the civil rights movement since his earlier visit to Minnesota in 1961.

“The changes have been almost miraculous as a result of the early sit-ins, and not a single person faced the threat of physical death in those demonstrations,” he told a crowd of local journalists.  King noted that integrated bus service had been achieved in 150 cities without a court test, and that segregation was disappearing in public transportation in the South because of the freedom rides.

King wows University audience
Later that day, King spoke to an audience of 3,000 at the University’s Northrop Auditorium.  There, he talked about the unfinished work facing the civil rights movement, noting that only about a 1.5 million of some 6 million eligible Negro voters were registered to vote in the South.   While segregation was dying, he maintained, “its death needed to be hastened by a second emancipation declaration” from the Kennedy administration, which would condemn segregation “as a more subtle form of slavery.”

“King’s quiet platform presence almost hypnotized his listeners as it did two years ago when he addressed the annual meeting of the Minneapolis Urban League,” the Spokesman told its readers. “The quiet eloquence with which he traced the unfairness of the U.S. to its Negro population left his friendly University audience in such a trance that it was deathly silent at the conclusion of his address and then stood on its feet and gave the slightly built leader an ovation.”

When King returned to Minnesota four years later, in April 1967, the country’s political and social landscape had been altered substantially. The 1964 Voting Rights Act had extended the vote to millions of disenfranchised blacks in the South, but a new, uglier mood had taken hold in the cities’ black ghettos. Two years earlier, Los Angeles’ Watts district had exploded in violence.  In the summer of 1967, deadly riots would sweep through places like Newark and Detroit.  Even Minneapolis would be caught up in the turmoil when young blacks torched mainly Jewish-owned shops on the city’s Near North Side.

By 1967, more militant voices in the civil rights movement were challenging King’s leadership role, questioning the efficacy of his emphasis on non-violence. At the same time, an escalating war in Vietnam was preoccupying Washington political leaders, leaving them little political capital to expend on domestic concerns. In Minnesota that year, King would confront the war issue, causing consternation for some black leaders who wanted him to remain focused on civil rights.

A hard edge this time
On April 27, King spoke again at the University, this time to an outdoor rally on the St. Paul campus. His words now had a harder edge. Chastising his largely white audience, at least indirectly, King maintained that whites, who supported Negroes in what he called the first phase of the struggle “were more opposed to Bull Connor and Jim Clark (the Selma, Ala., sheriff) than committed to genuine equality for Negroes.” King acknowledged that the legislative victories “had rectified some evils of the South, but did little to improve conditions for millions of Negroes in teeming ghettoes of the North.”

He went on to tell his audience that he would continue to condemn the urban riots but added: “I have an obligation to vigorously condemn the conditions in our society that cause people to feel they have no other alternative than to engage in self-defeating violence. Riots are the language of the unheard. Our summers of riots are caused by our winters of delay.”

Then, in an effort to link his concerns about the War in Vietnam with  the need for more progress on the domestic front,  King condemned what he called an “ill-conceived” war; declaring that “too many who are busy escalating the Vietnam war are declaring themselves conscientious objectors in the war on poverty.”

King received an enthusiastic response from his largely student audience when he declared that “America … which took the initiative to escalate the war should take the initiative to bring it to an end.”  He had just begun to expound on his opposition to the war, when an aide interrupted him, saying that he needed to leave for the Twin Cities airport to catch a flight back to Chicago.

The next day, the Minneapolis Tribune editorialized about King’s visit to Minnesota. It applauded his efforts to promote civil rights but said it was a mistake for him to start campaigning against the war.

The Minneapolis Spokesman concurred. In an editorial titled “Tie Up With Vietnam Dissent Will Harm Rights Movement,” the Spokesman said King’s effort to link the war with the civil rights movement “was idealistic but not good tactics or strategy for an individual who has been in the forefront of the battle for Negro rights in the country.  The civil rights forces need all of their strength, support and dedication here at home to successfully conclude the struggle. The only possible result of Dr. King’s excursion into the active ranks of the doves, as we see it, is the diminution of his valuable leadership in the civil rights movement, the movement which won him a Nobel Peace Prize.”

A year after his 1967 visit, King’s career was cut short when he was the target of an assassin’s bullet at the Lorraine Hotel in Memphis Tenn.