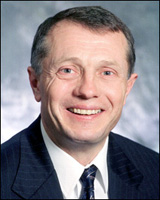 The hiring of former House Speaker Steve Sviggum by the Republican Senate caucus is not without its strange twists.

For starters, of course, Sviggum never served in the Senate. Rather he spent his legislative career — from his 1978 election to 2007 — as a member of the House, rising to speaker in 1999. And there is often a less than friendly rivalry between the two bodies.

Now, Sviggum will be the communications director for the Senate and also carry the title of executive assistant to the majority caucus.

But the House background is not the only unusual aspect of this hiring. Typically, staff positions such as communications director, are handled by staffers, typically less known than former big-time players such as Sviggum. Michael Brodkorb, who Sviggum replaces, was something of an exception to the rule that most staffers stay in the background in that hazy region called “unknown.”

“This unique opportunity gives us the ability to capitalize on Steve’s experience, knowledge of the press, successful decision-making skills and relationships he has created over many years of services,” Senjem said in a statement.

Between the lines, Senjem seemed to be saying that maybe Sviggum can, in a tough election year, rein in some of the more enthusiastically pure conservatives of the large freshman class.

Still, there’s so much that seems strange about the hiring of Sviggum.

Sviggum praised the excellent management work done by the Republicans in the Senate. “The Senate Republican Caucus is a governing body that is managing Minnesota very well,” said Sviggum in the statement regarding his hiring.

Depending on your point of view, that’s probably a debatable statement.

But there’s little evidence that the Senate Republican caucus is managing the Senate budget very well.

Republican legislators led the charge for all bodies and agencies to make cuts, starting last year, including the House and Senate. But by all accounts, the Senate delayed almost all of its cuts to this year.

It’s assumed that by the end of the coming session, the Senate will have to make substantial staff cuts to cover a $2 million hole in its own budget.

The final ironic aspect of the Sviggum hire is the complaint from many Republicans about career pols and government workers. Although a farmer by trade, Sviggum has spent a large portion of his working life in politics in government.

When Republicans lost majority status in the House in 2007, Sviggum left to join the administration of Gov. Tim Pawlenty as commissioner of labor and industry. At the end of Pawlenty’s time in office, Sviggum served as commissioner of Minnesota Management and Budget.

He currently serves as a member of the University of Minnesota Board of Regents and put himself in the midst of a controversy last fall when he also accepted a position as a “fellow” at the University’s Humphrey School of Public Affairs.

Faculty groups protested, suggesting that the dual roles could lead to conflict.

“I think the roles are manageable,” said Sviggum at the time. “I think they’re exclusive of each other.”

In the end, however, he was forced to pick one or the other, and he opted to stay on the Board of Regents.

One final little twist in all of this: When Sviggum finally does retire from his life in politics and government, he’ll be eligible for healthy government benefits from his long public career.

On Thursday, the man who succeeded Sviggum in the House, Rep. Steve Drazkowski, is joining forces with Sen. Mike Parry to hold a Capitol hearing to look at “excessive payouts” of sick time, vacation time and retirement benefits to employees of state universities and government employees.