It could be the most dysfunctional “family” in the state.

Some of the Senate Republicans’ first acts of the session — cutting only from the Senate DFL’s budget last week and Monday’s rejection of Gov. Mark Dayton’s appointee Ellen Anderson — have DFLers on the fiery offensive.

That comes just days after the “collegial” opening of the 2012 legislative session, where new GOP Senate Majority Leader Dave Senjem called the body a “family.” It looked to be a reprieve from the intensely partisan budget negotiations that plagued last session and led to a historic state government shutdown.

“Sen. Senjem didn’t disappoint me on Day One,” said DFL Sen. Terri Bonoff, speaking on the Senate floor Monday about Anderson’s confirmation vote. “[Senjem] spoke of us as a family in a way that only he can do. I smiled. I thought that would be his demeanor. And yet, abruptly, things turned.”

Shortly after Senjem’s opening speech, Democrats learned they’d take a $444,400 staff budget cut while the GOP would not face a reduction. Then, three days later, rumors started that Anderson likely would lose her job as chairwoman of the Public Utilities Commission.

On Monday, the rumors came true when Anderson lost her position as head of the five-member board that regulates Minnesota’s utilities. Her confirmation was denied on a 37-29 party-line vote by her former colleagues.

Gov. Mark Dayton appointed Anderson, a former state senator from St. Paul and an expert in renewable energy issues, to the post in March. She had chaired the commission until the Senate vote.

It didn’t take long for Democrats to add the ouster to what they say is a litany of GOP partisan offenses against its political opponents.

Dayton was particularly pointed in his criticism.

“A very good person, a very dedicated public servant and an excellent chair of the Public Utilities Commission was wrongly maligned and cruelly rejected today by the Republican senators, who showed once again that they are unfit to govern this state,” Dayton told reporters shortly after the vote.

With all their recent caucus turmoil, wouldn’t the best option for Republicans be to have a quiet session? That’s what Dayton thought aloud on Monday.

“I would think that given what has occurred in the previous couple months, that they might try to start off on a good foot, on the right foot, in terms of working cooperatively,” Dayton said. “I’m mystified what the strategy is that says, ‘By being more partisan, by being more extreme, by catering more to our extreme right-wing base, we’re going to prove our standing with the people of Minnesota.’ “

Given recent events, the GOP strategy for its opening legislative moves seems unclear. 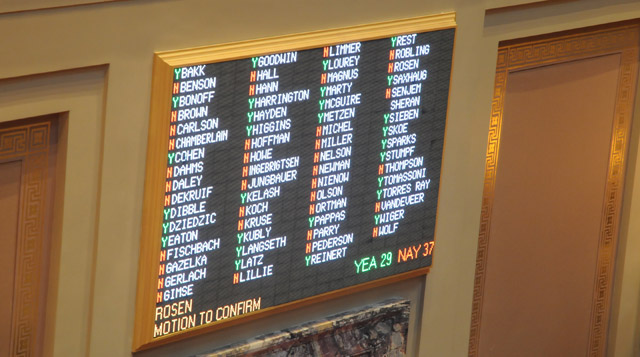 MinnPost photo by James NordThe final results of the roll call voted that ousted Ellen Anderson from the PUC, Gov. Mark Dayton’s first appointee to not be confirmed.

After former Senate Majority Leader Amy Koch confessed to having an inappropriate relationship with a staff member in December, the Senate GOP had to select an entirely new leadership team after questions were raised about how events were handled.

Senate leaders also publicly forced out their communications director, Michael Brodkorb. His successor, former House Speaker Steve Sviggum, came with his own public relations headache — after questions were raised about a potential conflict of interest because he serves on the University of Minnesota Board of Regents.

All that followed reports that the state GOP was deeply in debt, in part because of former Chairman Tony Sutton.

Members of the Senate GOP have remained quiet on why the caucus has taken these steps early on in session. Some observers question if such issues really even matter to the public.

Republicans on the Senate Rules and Administration Committee wouldn’t say whether the cuts they forced through were fair. In fact, few members rose to speak in defense of the reductions, and most remained quiet until the vote.

Over the past few days, both have said that they’re simply looking out for ratepayers and businesses in Minnesota and that sources of energy must be “balanced” between renewables and fossil fuels.

“I look at a career that has demonized traditional energy sources,” Rosen said on the floor in reference to Anderson’s record. “I look at derogatory references to ‘dirty and dangerous fossil fuels,’ or ‘energy cartels.’ “

But Democrats said when Anderson became chairwoman of the quasi-judicial body that interprets state statutes, she stopped thinking as an advocate.

“She was leashed,” Sen. Sandy Pappas said. “She had a muzzle on, she had to follow the law, and that’s what she did.”

Monday’s Senate vote was more personal than others about budget legislation and policy provisions. Anderson was a friend and former colleague of many members, including Rosen. The two have co-sponsored a significant amount of legislation in the past. Afterward, Gov. Dayton criticized Republicans for calling Anderson “extreme.” In one of his most public displays of emotion and anger as governor, Dayton said the Senate action had “severely damaged” his relationship with the GOP.

“I’m not going to help them camouflage the fact that they’re running a very cutthroat, partisan operation,” Dayton said. “They can smile and say they’re going to be congenial … [but] their actions belie what they claim are their intentions.”

In a press conference after the vote, Rosen did her best to reassure reporters she would be able to work well with Dayton in the future, even on such high-profile issues as a Vikings stadium. Her subdued responses, however, seemed to work against the confident message she tried to send. 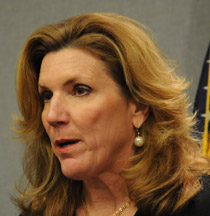 MinnPost/James Nord Sen. Julie Rosen“I’m sure there was a lot of emotion,” Rosen said in response to Dayton’s comments. “There does seem to be a lot that’s happened lately, and probably the timing was not appropriate, but I believe that we can move forward from this. It’s all about relationships still, and we can hopefully sit back, lick our wounds and move forward.”

Rosen said that Senate Republicans should have finalized the chamber’s budget and held a final vote on Anderson’s appointment last session. “We are learning, and hopefully we can pick ourselves up and move forward,” she said.

But Rosen said GOP leaders waited on the vote last session at the governor’s request.

Dayton had asked former Senate Majority Leader Amy Koch to delay the vote and allow Anderson to prove she could manage the commission well. Months later, the governor said, Anderson’s record speaks for itself.

But to Rosen, rejecting the Anderson appointment has always been a no-brainer. A Senate committee met last May to discuss her confirmation but did not issue a recommendation to the full body, a move many saw as a bad sign for Anderson’s future on the board.

“To say that this was a big surprise, that they didn’t know this was coming is short-term memory on [Dayton’s] part,” Rosen said.

Dayton and legislative Democrats criticized the Senate vote as politically motivated, or sparked by corporate pressure. DFL Sen. Scott Dibble called it a “political hatchet job.” Democrats point out that her voting record as chairwoman of the PUC is in line with the Republican majority on the commission.

Rosen denied the vote was delayed retribution for appointees of Gov. Tim Pawlenty who were ousted when the DFL controlled the Senate. But Rosen did say that she had discussed Anderson’s position with utility companies.

“This is extremely difficult, and I do not take this lightly, as I said on the floor,” Rosen said. “But we have received overwhelming feedback from the public about the confirmation, in opposition.”

This was the first Dayton appointee to be shot down by the GOP-controlled Senate. The Senate overwhelmingly approved three other state agency heads on Monday.

The governor seemed to thumb his nose at Republicans by offering Anderson a post in his administration as a senior adviser on energy at her current salary.

The governor ended his prepared remarks to reporters with one last blast: “They are too extreme to lead.”