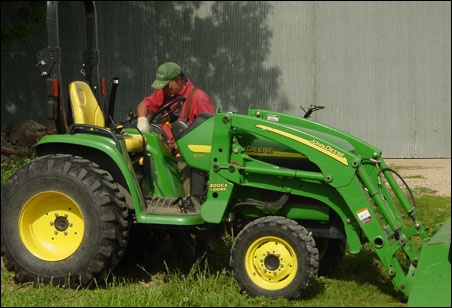 Jim Degiovanni has been a lawyer for more than 20 years. Spending most of his days in an office, Degiovanni saw myriad cases come across his desk — from local-government law to real-estate and banking transactions. But for someone who loves hunting deer and taking canoe trips in the Boundary Waters, something was missing.

“I really enjoy the outdoors, you know, experiencing the seasons change and working with my hands, taking care of animals,” Degiovanni said. “When I got tired of private practice, I started working for a single client. I suddenly had more time to start growing things.”

Since 2002, Degiovanni and his wife, Mary, have been devoting more of their time to growing berries, squash, peppers and tomatoes and raising sheep and hens at their new enterprise, The Dancing Bears Company. The 15-acre farm in St. Joseph, Minn., is named for an art project their daughter made on a canoe trip. In 2007, the couple’s produce achieved organic certification, and the farm has been thriving ever since.

“We’ve gradually been getting bigger. We have more animals than ever before,” Jim Degiovanni said. “Business has been good, good, good!” 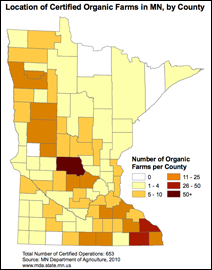 Amid Minnesota’s $69 million organic industry, organic farms in Stearns County also had a higher average net income than those of any other county in the state from 2006 to 2010, according to data from FINBIN, an agricultural finances database assembled by the University of Minnesota’s Center for Farm Financial Management.

In a state and country where Big Ag dominates, Stearns County defies the conventional wisdom that only size matters.

“I think organic farming is still catching on, still growing,” Degiovanni said. “But here, we’re holding our own.”

Sustainable heritage
Stearns County has an old, strong tradition of farming that has kept its families and communities close together.

John Decker, archivist at the Stearns County Historical Society, said that upon Stearns County’s establishment in 1855, the population was made up of migrants from the eastern states with British Isles or German heritage who had a healthy respect for the land and saw themselves as its stewards. He said this tradition is what is behind every longstanding farming family in Stearns, and it shows in the large number of century-old farms.

“There’s over 400 of them that we know of,” Decker said, quickly adding that Stearns may even have some century-old farms that are not accounted for by Historical Society records. Decker said the unique heritage of farming in Stearns has helped preserve the soil quality of the county’s farms.

“I think back then there was more of a survival mode,” Decker said. That survival mode meant that farmers had to work in a way that preserved the fertility of the soil. “I think it’s passed down from generation to generation that you take care of the land.”

While some have followed the trend of changing to large, specialized farm operations, many Stearns County farmers have carried on a diversified farming tradition, growing everything the farm needs on-site, Decker said. Diversified farming means crops get rotated and livestock get fed from the land they reside on.

Good soil, good space
Stearns County’s success also comes from a near perfect storm of attributes that have allowed the county’s organic sector to thrive. With fertile soil, a heightened demand from the local college towns and plenty of open space, Stearns County offers organic farmers a unique cradle in which to kick-start this burgeoning industry.

Straddling the border between the rich prairies and deciduous forests of central Minnesota, Stearns County provides a fertile environment for both crops and livestock. According to a 2001 Minnesota soil landscape survey by the University of Minnesota Extension, Stearns County soil is dominated by mollisols, a type of prairie soil that is “the basis for the state’s productive agricultural base.” Rich with glacial deposits, the mollisols in Stearns County are comparable to the soils of the Red River Valley, making a healthy environment for corn, soybeans, small grains, sunflowers and numerous other types of produce.

Education creates demand
The USDA reported that the number of organic farms nationwide doubled between the years 2000 and 2008, while sales of organic products from 1990 to 2010 have grown from $1 billion to $28.7 billion.

Much demand for organic products concentrates around college towns, Greene said. Consumers with a higher education are more likely to purchase organic products, regardless of race, income, or presence of children, according to the MDA’s 2010 Status of Organic Agriculture in Minnesota report. [PDF]

St. Cloud State University, Rasmussen College, Minnesota School of Business, St. John’s University and the College of St. Benedict are all located in Stearns County, and bring a large number of faculty and students to local farmers’ markets and organic food co-ops.

“Most of our customers and volunteers come from the universities,” said Katie Foley, general manager of Minnesota Street Market, a food co-op in St. Joseph.

Farmers caught off guard
The co-op opened in July, late enough in the growing season to catch the Stearns County organic farmers off guard, creating more demand than they could supply.

“They weren’t ready for us,” Foley said. “We didn’t get everything we ordered.” Foley was still able to stock almost half the Minnesota Street Market’s shelves with produce strictly from the county. After six months of operation, Foley says the co-op has “about broken even” with $23,000 in net sales, and she is optimistic going forward. 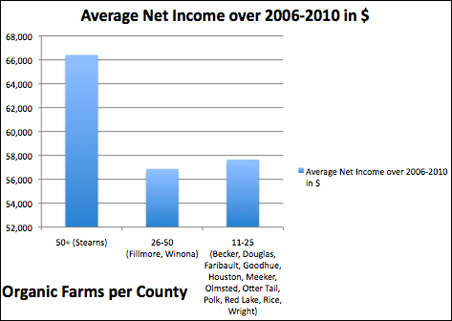 The fast-growing success of the Minnesota Street Market speaks to the heightened demand and acceptance of organic products in Stearns County.

“The reception has been wonderful,” Foley said. “Many farmers are excited to include us in their plans for 2012.”

Foley noticed that most of her customers buy organic products because they care about sustainability practices and healthy eating.

“But really, the health of the Earth has surpassed some people’s concerns of their own health,” Foley said.

That sustainability ideal applies to both long-term and new organic farmers in the county.

“For those organic farmers that have grown up in agriculture, they have decided to up the responsibility ante. But organic farming is also an entry point for new farmers that haven’t inherited the combine and the 480 acres,” Foley said. “They all believe that it’s the right thing to do.”

Dairy powers the market
Of the 50 Stearns County organic farms listed in the National Organic Program registry, 44 percent of them raise livestock.

“Many of the organic farms in Stearns County are dairy farms, and 2010 was a better year for dairy farms than for crop farms,” said Rob King, a University of Minnesota professor of applied economics and member of the MDA’s Organic Advisory Task Force, in an email.

Stearns County’s dairy industry is the largest in the state. Of the more than 3,000 farms in the county, most are dairy producers. The dairy industry accounts for 37 percent of total farming in Stearns.

It’s no surprise that one of the most successful and far-reaching milk processors in Minnesota is based in Sauk Centre. Pride of Main Street Dairy buys both conventional and organic products from farmers in Stearns and its surrounding counties.

Supplies kefir to Trader Joe’s
Marv Hinnenkamp, vice president of Pride of Main Street Dairy, said the dairy industry is Main Street’s most stable side of the business. Lifeway Foods took over ownership of Pride of Main Street Dairy in 2006 and added it to its network of processing facilities. According to Hinnenkamp, his company supplies products to big organic brands like Lifeway and Horizon, and even supplies the chain store Trader Joe’s with its organic kefir, a drink with a similar consistency to yogurt.

Hinnenkamp said Main Street started processing organic dairy products in 1999. At the industry’s start, farmers originally focused on the land, but now farmers are more focused on the price on the shelves. He said organic products are priced higher than their conventional counterparts. A recent surge in demand sparked higher prices in the past five years, and farmers in the industry are enjoying the benefits.

“It has nothing to do with the real cost of production,” he said, adding that organic products are priced as commodities instead of as products with real costs and profit margins.

Hinnenkamp said most organic farmers in Stearns County moved to organics not because of price, but because of ethics.

“Most of the farmers you talk to out there — they went organic because they believe in it,” Hinnenkamp said.

An easy transition
John Sluss, a farmer for 47 years, said his farm has only been certified organic for the past 10 years, but the transition was easy for him. He moved to organic when he got tired of using chemicals on his land. Sluss is a member of the Sustainable Farming Association of Minnesota, which serves as a network for farmers to connect with each other and discuss sustainable techniques and share best practices methods for organic farming.

“Organic agriculture is really the only sustainable way to go,” he said, and equated conventional methods to “mining the land.” He said the methods the conventional industry uses to farm deteriorate the soil and will eventually make fields sterile.

“It has to fall by the wayside, otherwise the world isn’t going to survive,” Sluss said.

This article was produced in partnership with students at the University of Minnesota School of Journalism and Mass Communication, and funded in part with a grant from the Ethics and Excellence in Journalism Foundation.